You may have gathered by now that I rather love my food. It’s in the tag line and my unconditional love of cake is something of a stuck record. I once flirted with the idea of food blogging but the fleeting moment was rapidly surpassed by the realisation that until the English language expands its repertoire of synonyms for the word, “delicious”, I may struggle.

More relevant, however, is that travel is my greater passion. I anticipate I’ll be eating for most of my life but the ability to travel far and wide is dependent on so many factors so I’m globe-trotting my little heart out whilst I can and blogging away, eager as a beaver, as I go.

That said, world travel and fabulous foods are about as inseparable as those elderly couples you see, walking hand in hand after half a century of marriage. So I write about food once in the odd while, either when I’m  gastronomically inspired or (as is more usual) when I’m hungry and the creative juices flow almost as much as the saliva. 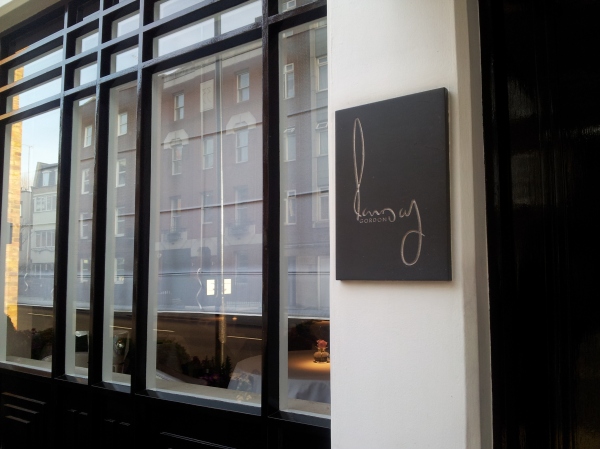 Left to my own devices, I may not have made it to this exorbitantly lavish 3 Michelin star meal. It would have been an insurmountable challenge to see out the meal without wondering which flights I could book for the same price. Fortunately for my tastebuds, on this particular day, the weighing up of opportunity costs was snatched from my hands after my sister declared that she wanted to go to  Restaurant Gordon Ramsayfor her birthday. And who am I to disappoint?

Sat alone at the table (having turned up early for the first time in my life), I re-hydrated with a passion fruit nectar from France. This was the most delicious passion concoction since the fresh juice I guzzled by the gallon on honeymoon in Zanzibar.

But Chef Ramsay didn’t bag himself 3 stars for the quality of his fruit juices so we rapidly move onto the good stuff. And the first teaser was a warm, pastry, cheese puff, so creamy and comforting that you floated into a dairy utopia.

The bread arrived shortly afterwards. This is usually where it all goes wrong for me. Bread at such places is inevitably “delicious” and no matter which particular diet happens to be en vogue this season, they all seem to be carb-loathers. Me – I’m a carb-loader and revelled in the warm bacon bread.

The amouse bouche gave me greater apprehension – as a lifelong mushroom hater, I was unsure what I would make of it but served with chestnut sauce and duck egg yolk, I forgot the wretched ingredient was even there. There’s something so earthy about chestnut flavour, sweet but understated, the perfect backdrop to the crispy sharp onions that the dish came with.

I ordered the potato salad for starters , a collection of different types including the elusive purple potato, which were enriched by the baked vacherin that laced it and this was easily my favourite course, something I rarely say about starters given my pathologically sweet tooth.

It was a close call between my salad and birthday girl’s duck egg ravioli with veloute of Jerusalem artichoke and mushroom ragout but the award for presentation went to Pumpkin’s globe artichoke with smoked pork belly.

My miso-glazed cod was as light as one would wish for a lunchtime main and I loved the depth of texture added by the black quinoa. The dish came accompanied by a lapsang souchon broth, which the waiters bring to your nose. If you’ve been afflicted by the winter flu, you’ll be wanting to dig out the decongestants to allow its aromas to permeate your sinuses.

As our meal came to an end, my sister, much to my surprise, opted against the pineapple financiers with coriander, coconut sorbet and vanilla cream and Pumpkin, who has something of an addiction to chocolate opted against the creamy caramel and mint chocolate bars with salted popcorn. Clearly in a culinary alternate universe, I was determined to maintain some sense of reality and predictably stuck to chocolate but I had no regrets, particularly not after trying a spoon of the decadent tonka bean ice cream it came with. 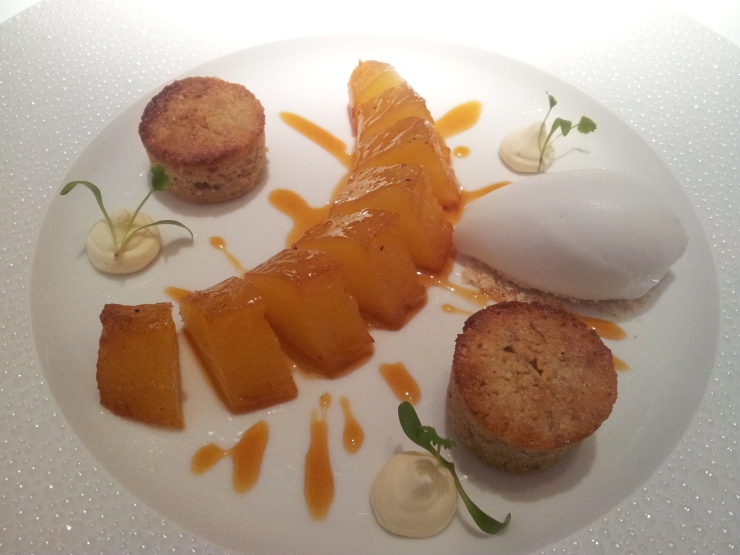 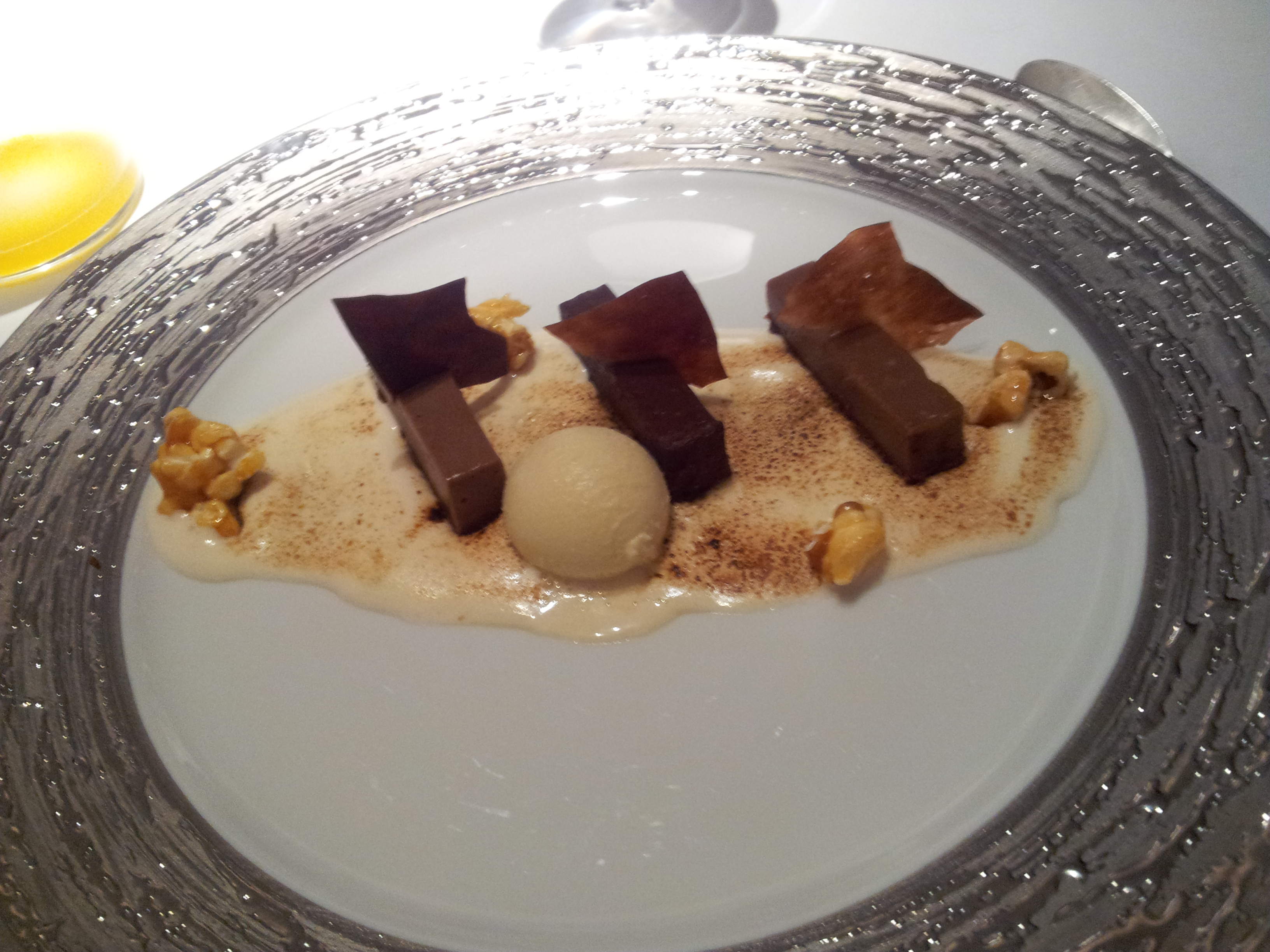 I think sibling would have chosen differently had she known they were about to bring her an elegant, celebratory, praline dessert and by this stage, she had transcended that delicate boundary between pleasure and pain, a phenomenon we know as greed. Pity for her then that the petits-fours arrived shortly afterwards to add to her challenge – chunks of chocolate ganache, strawberry ice cream truffles encased in a white chocolate shell and served in dry ice; this would have been a greater novelty had I not seen a very similar display at Gordon’s other London gem, Petrus).

It was the bejewelled Turkish delight, crowned with gold leaf and served on a shimmering platter fit for royalty, its delicate hint of rosewater dissolving on our tongues – it was this that transported me back to the Middle East in the 1980s, our childhood home, bringing back memories of a world unrecognisable from our London lives now but one which brought us so much joy. And in this way, through this 3 Michelin star meal, I did travel – back in time and  into Arabian lands.

12 thoughts on “Restaurant Gordon Ramsay, London – 2 ladies (and a Pumpkin)”