Whenever visitors from abroad come to see us in London, Dad and I become embroiled in discussions about one particular place – Canary Wharf. Dad wholeheartedly believes it is worthy of sightseeing status and insists that the skyscrapers and new builds that line the banks of the Thames here make it “just like the Manhattan skyline”. Errrrrr. No.

Anyone who reads the blog regularly will know by now that I am fiercely passionate about London. Criticism about the city I’m in love with wounds me in that visceral way that I would feel if anyone tried to carve my Pumpkin. And yet even I will say this. Canary Wharf may be many things. But it is not the Manhattan skyline.

A brief explanation to those of you unfamiliar with London – Canary Wharf is a key financial hub in London. On a typical weekday, you will see swarms of suits, crisp collars, creaseless white shirts and Blackberries. There will also be a fair proportion of stressed people hiding underneath the suits and I will meet them later at the GP surgery. 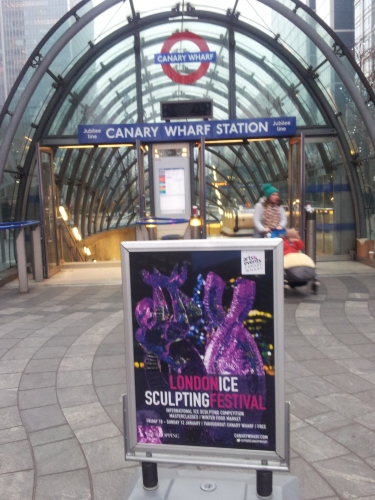 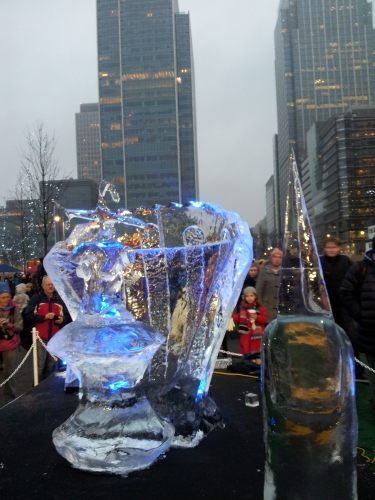 Sure, there are a few waterside restaurants and the surrounding area of Docklands has boomed in residential properties in the last decade but all in all, it’s not a part of London I’ve ever felt compelled to return to.

The London Ice Sculpting Festival gave me the impetus I needed to give the wharf another chance.  Sister and I got the gloves out and followed the crowds to see what this was about. This was a free, outdoor ice art gallery with food markets, live sculpting demonstrations, competitions, performance and culture. It was the kind of art I could get used to liking and we marvelled at the way these weighty, oblong blocks of cold came to life, giving birth to people, expressions and characters.

The press gave it their best, as did the collection of SLRs, milling around each statue, one elbow asserting itself over another, whilst trying to assure the optimal angles; but the artists kept a firm focus on their masterpieces. Some of these were abstract art. When it comes to interpretation of art, I have about as much intelligence as a toad so the helpful pictures displayed at the foot of each statue helped me understand just what I was looking at. It was crowded, I can’t deny that but the statues are huge so no matter how little or large you are (I’m quite little), height is no deterrent to you enjoying these views.

Entrants for this festival were from all over the world, here to impress the judges and seemingly also the public, who were allowed to cast their votes for their preferred sculpture. Choosing one was a challenge but conceptually, this one was my favourite – I like the fairytale factor it has…a little girl trying to catch a bubble. I wonder if she is dreaming, making a wish. I wonder if she is besotted, inspired, philosophical or simply content. I feel twinges of familiarity looking at her.

We were here for the ice today and only the ice. The weather was a murky, grey with a bitter wind chill and we weren’t able to enjoy the winter food market, as we had eaten prior to arriving. But like opium to a drug den, my feet dragged me towards the cakes as if detached from my body. I bought one for later, a pistachio financier from Comptoir Gourmand, so moist and buttery that I had no regrets about leaving behind the beautifully bouncy lamington. I could have had both but at least once a year, I ought to exert some self control. If you decide to attend this next year, come on an empty stomach to sample everything from crepes and empanadas to dumplings and burgers.

New York City, Jerusalem and Bruges are just a few other world cities, which have joined London in hosting similar festivals. Have you ever been to an ice festival or know of any others around the world? I’d love to hear about your experiences.