It has taken plenty of ‘discussions’ (and several failed attempts at hint-dropping) for me to learn that Pumpkin, for all his many skills is not good at detecting the hidden undertones of a woman’s subtext. And what a minefield that can be. If I want something, it is most energy-efficient to spell it out. No mind analytics and everyone knows where they stand. So when I spotted the Eating London food tour featured on one of my favourite blogs, Bruised Passports, the conversation went a little like this:

Me: I want to go on the East London Food Walking Tour for my birthday

Pumpkin: OK. Shall I book it?

Simple. If only I had had this epiphany 4 years ago.

I woke up sprightly the morning of the tour to the sound of gale force winds but conditions settled when we arrived at our meeting point at 10am in the heart of Spitalfields market. Group sizes are limited to 10 and we joined 5 other keen foodies and an extremely enthusiastic guide to begin our trek of East London’s culinary highlights. Notions that you’ll need a stomach the size of the Ngorongoro crater to be able to do the tour are misconceptions. 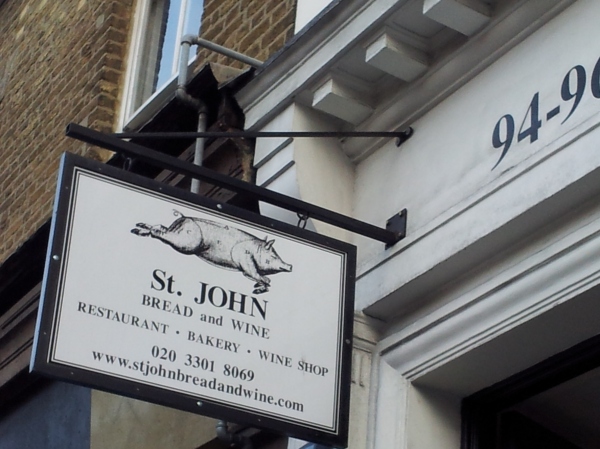 They run a very tight ship and size out the gourmand nuggets perfectly. First stop, St John Food and Wine for what The Evening Standard rated amongst the best bacon sandwiches in London. Us Brits will understand the gravity of such an accolade in a nation where the bacon buttie is about as British as breakfast can get. Initial gasps at the enormous size of the sandwich were rapidly allayed once we realised we were only to eat a sliver. 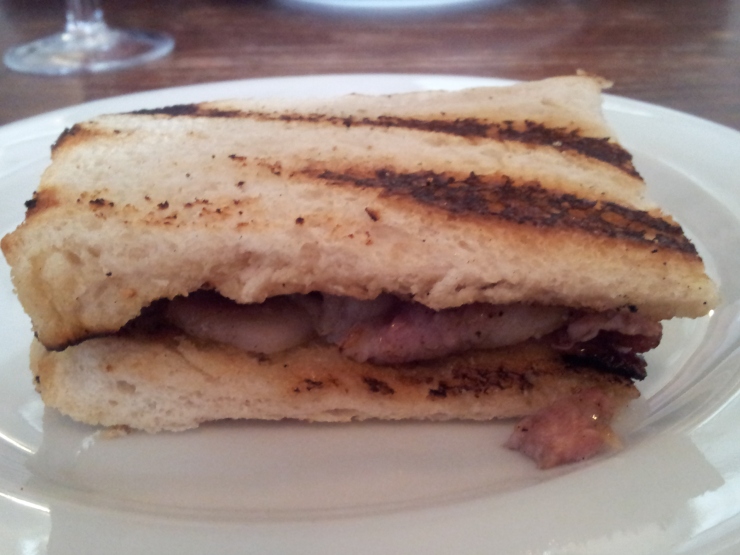 I don’t know whether it was the tenderness of the Gloucester Old Spot rashers, or the perfectly charred bread with homemade ketchup (plus secret ingredient)…Perhaps it was the sheer hunger we’d had from starving ourselves in preparation, but this really hit the spot first thing on a winter morning.

I’ve lost count of how many quirky facts I learned on this tour; for starters, I had no idea that the name ‘Spitalfields’ is derived from the word hospital, as the market stands on the location of a former hospital destroyed by Henry VIII. We wandered through a myriad of streets, just a few miles from home and yet completely foreign terrain to me. This is what I love about London – there is always another little pocket waiting to be discovered.

East London is an area of enormous regeneration and arguably the part of London most stooped in history, crime, poverty and culture. In the 1800s, there was a huge influx of Jewish people, escaping persecution and making the affordable streets of East London their home. Artefacts reminiscent of their presence are easy to spot – especially if you have a dynamic guide helping!

We were shown the beautiful brick-red architecture of the old Jewish soup kitchen, where families and children would line up in conveyor belt fashion bearing their own bowls, such was their resolve to avoid being perceived as a drain on society.

Perhaps their greatest legacy is the renowned 24 hour Jewish Beigel Bake store on Brick Lane – a place that welcomes everyone from feisty Jewish grandmothers to hungover, impoverished students. The queues were crawling the kerb more than working girls in a red light district (at one stage, rumour has it that East London had more prostitutes than it did men).

The prized trophy at Beigel Bake is the salt beef bagel with gherkin but as non-beef eaters, we opted for smoked salmon and cream cheese in a perfectly chewy beigel. The limitless passion that the owner has for his business sees him working 2 x 24 hour shifts a week after decades in the business – even as a doctor, I’m not sure I did hours like that!

But the presence of the Jewish people became shadowed by the arrival of the Irish, who were fleeing the great famine. Like the Brits, they also enjoy a good bread pudding and our next stop was for just that in The English Restaurant, a family run institution in one of the oldest existing buildings in Spitalfields. Bread pudding came to life in wartime England when desperate times called for rationing of stale bread, which was then steamed and mixed with fat to form the origins of the pudding we now love. Here, they serve it with a rum-flavoured, warm, creamy custard. 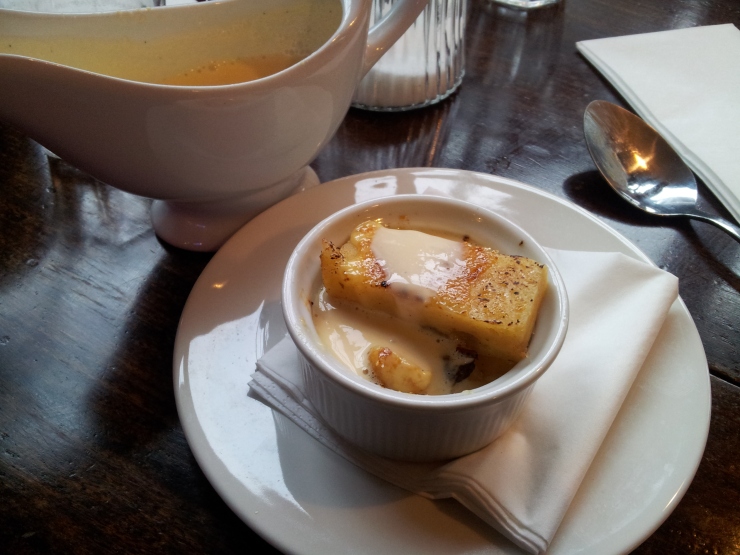 If it isn’t already apparent, multi-culturalism is woven into the very fabric of East London’s rich tapestry so our next pit stop Androuet, had a French flair – a fine fromagerie, whose origins lie in Paris. We sampled Brie, Blue Stilton and a heavenly Somerset cheddar with sweet accompaniments including caramelised nuts and raisins and were offered 10% discount on any purchases. 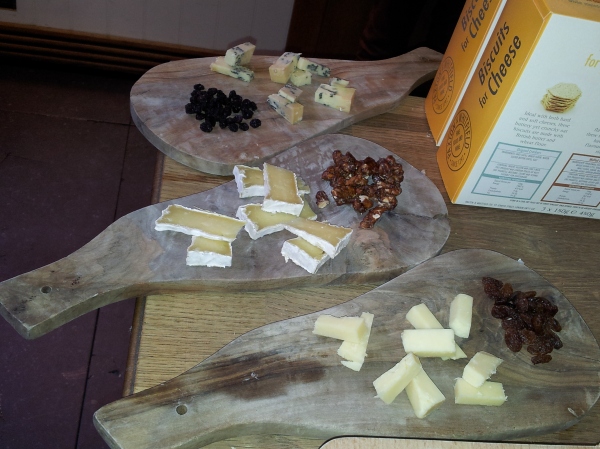 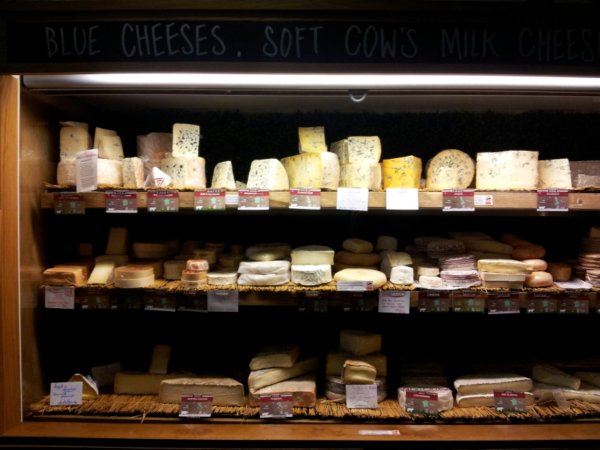 No visit to East London would be complete without reference to Jack the Ripper, whose heinous crimes made him an integral part of British criminal history. We were shown the car park, where the morbid discovery of his first victim’s body was made. Close by was an old shelter for the poor with separate entry doors for men and women, which was operational as recently as 1999, a stark reminder of the level of depravity that the borough of Tower Hamlets has faced. 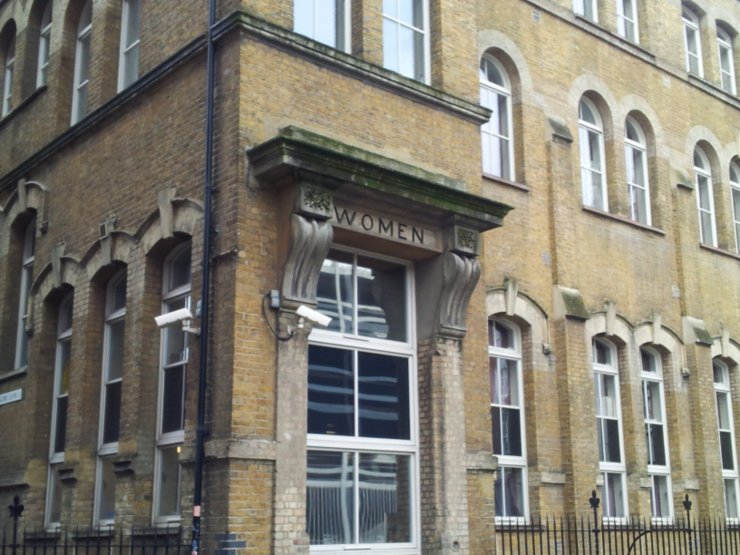 The most recent cultural group to have settled their roots here are the Bangladeshi community and the aromas floating around Brick Lane from their countless curry houses will have your stomachs rumbling. Loudly. Most of these are BYOB (bring your own booze) and the food is cheap as chips. (More to come shortly on chips). But as someone of Indian heritage, it takes somewhere special for me to be impressed by curry, as this is the food I’ve grown up with.

I was therefore pleasantly surprised by the quality of the chicken, vegetable and mostly of the sumptuous lamb curry at Aladin with hints of cinnamon and a rich, tantalizing sweetness. I was so caught up in it that I forgot to photograph it and its fans reportedly include none other than Prince Charles!

Such a prevalence of Islamic people in an area calls for a local mosque and we walked past the Jamme Masjid Mosque, a fascinating building, once a Protestant Chapel, a Synagogue and now a Mosque, perfectly mirroring East London’s diverse history. 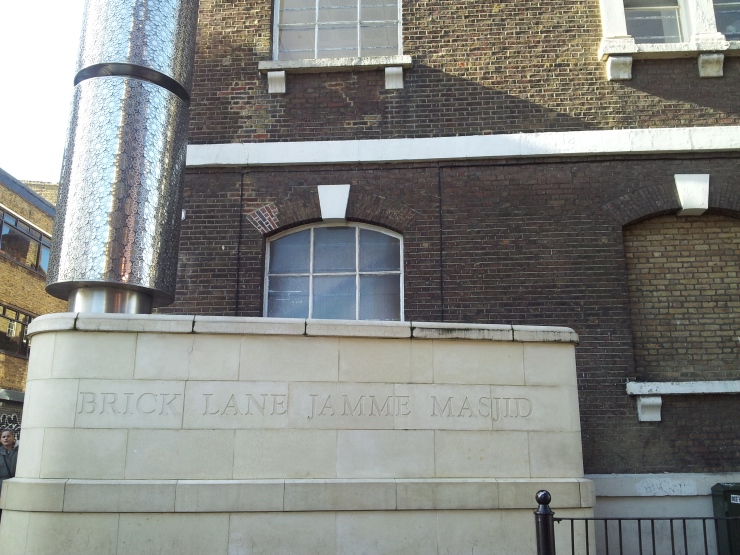 It is an unfortunate reality that even in this day and age, in such mixed areas, racial tensions remain. This particular mural, depicting a woman of Islamic faith holding hands with a Caucasian male is a symbol of unity, racial tolerance and religious understanding. 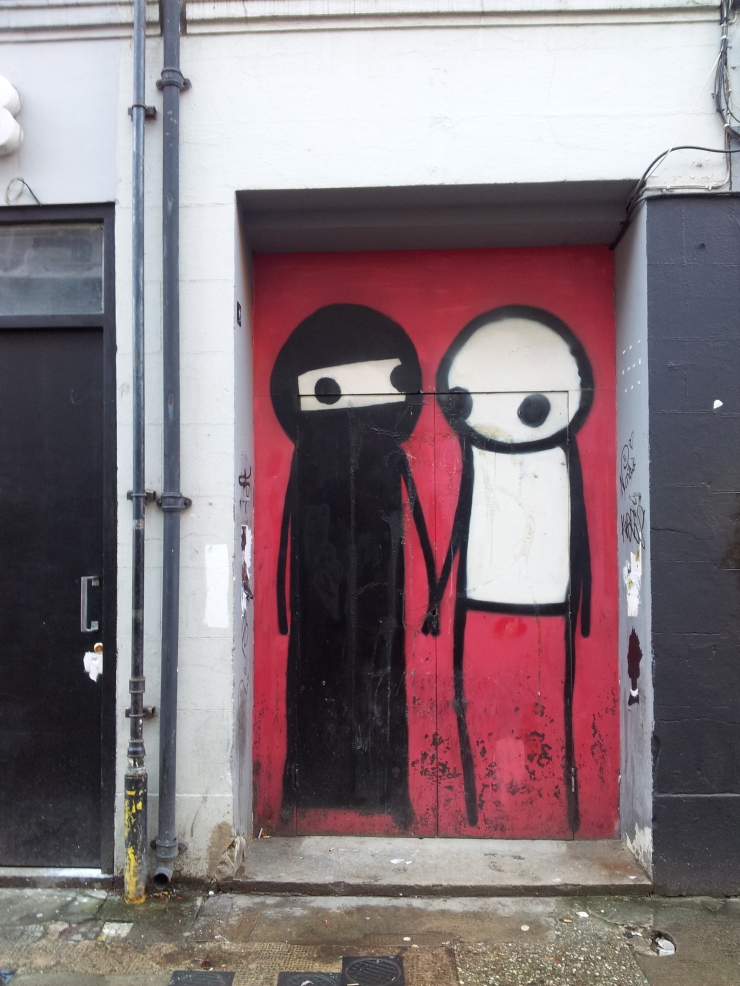 The tour awoke a curiosity in street art that we didn’t even realise we had and this part of London is one of the richest places in the world for it. We delved into this new interest further during our recent trip to Buenos Aires. Watch this space for more on that in the coming weeks…. 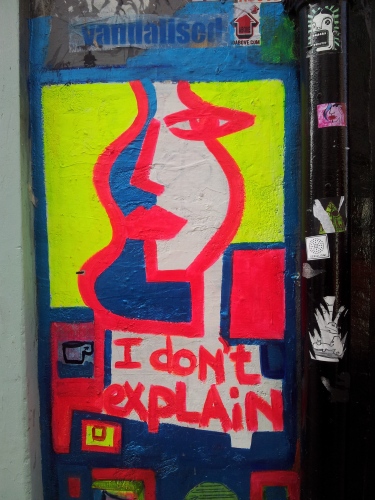 Is it time to reveal my favourite stop? Was it the salted caramel tart served with cream at the airy and super-trendy Pizza East, a restaurant housed on the premises of a former tea factory. You’ll have to read more to find out. 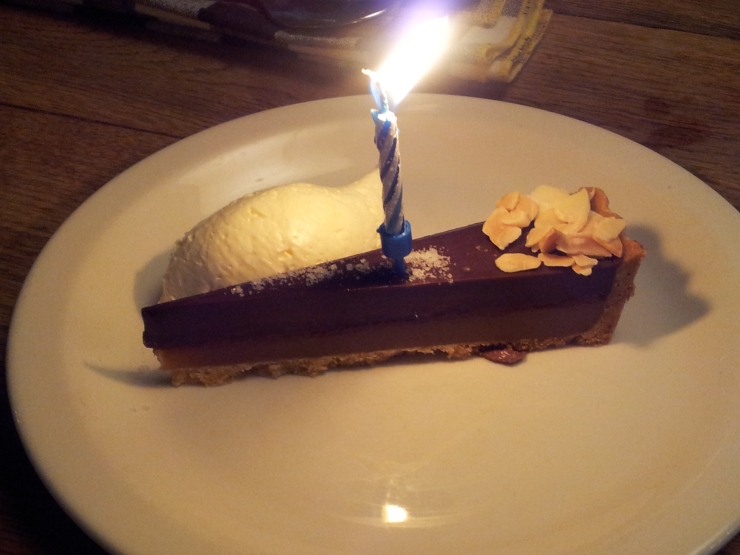 East London is full of restaurants, bars and apartments, all redeveloped from former factory and brewery locations. It is an area of immense artistic value and you need shabby hair, skinny jeans, tattoos or just an eclectic sense of style to look the part here. It is considered such a hub for creativity in fact that there are an estimated 60,000 artists residing in this area alone! 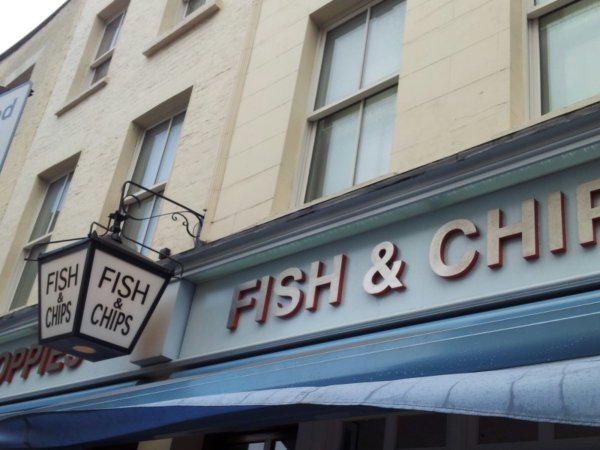 It should be law that a British food tour must include‘fish n chips’ and Poppies was the birthday highlight for me. This chippie, recently voted the best in the country, is intriguingly retro with a Milkybar vending machine, a juke box and a kitsch colourful interior. 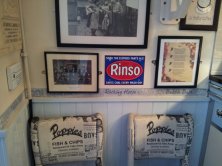 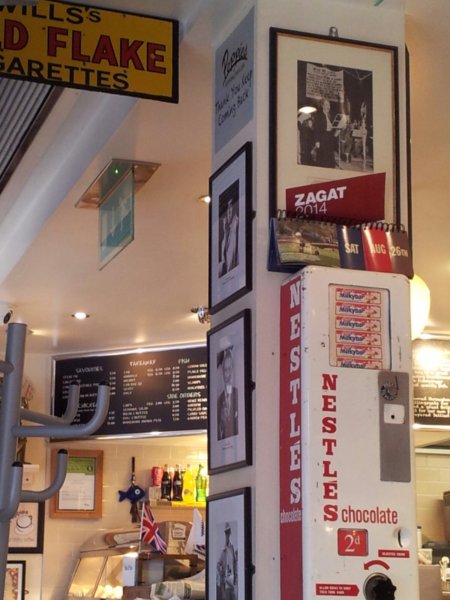 When the health and safety police deemed it inappropriate to use real newspaper to wrap your fish and chips in, these guys refused to part with tradition and had their own replicas printed. The fish batter is so light that unlike most joints, you don’t see swamps of grease left on your plate and the thick chips and mushy pea sides made it my winner! 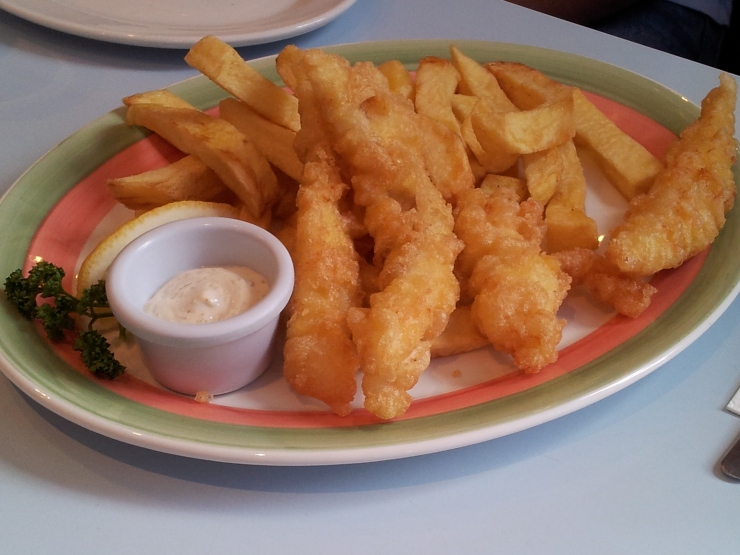 (It is less of a surprise to me that one of Pumpkin’s highlights was the stop at a traditional British pub, The Pride of Spitalfields, where you’ll find traditional real ale and cider and home to Lenny the cat, who is a something of a celebrity in his own right.)

When I set off that morning, I thought I was embarking on a foodie adventure but by the time the sun was down, I’d also had a history lesson, a foray into different cultures and an art exhibition of sorts….all whilst tasting some of Time Out’s top London dishes. This was enough to leave any birthday girl feeling smug and I am a convert to the food tour experience. What other London food highlights can you recommend? Have you been on a food tour anywhere else?

Keen to join the food tour fun? Leave me a comment telling me which dish you are most tempted by and I might just send you a discount promo code 🙂