If you read my previous article about The Sepilok sanctuary, you may have vague recollections about that centre being the home of the adolescent orangutans in Borneo. Most of the rescued babies, however, are taken to the rehabilitation centre at the Shangri La Rasa Ria in Kota Kinabalu. For guests heading only to Kota Kinabalu, this is the place to see orangutans and if, like us, you are staying at the sister hotel, Shangri La Tanjung Aru, then there’s a simple shuttle bus to take you across. Entry is charged and it is best to book this trip in advance but the nature reserve at the Shangri La offers many other activities including jungle and canopy walks, some of which can be combined with opportunities to see the orangutans.

It was fascinating to see the contrast that comes with maturity. The babies are much less confident, more easily scared and unfortunately, the macaques seem to exploit this vulnerability, something they weren’t able to do in Sepilok, where the older orangutans were unfazed by their hovering.

But the littl’uns are undeniably adorable and the longing to hold them (however wrong I know it is) is unquestionable. We were lucky that when we arrived, there was just a drizzle of rain, clearly insufficient to suppress their eager appetites but when the downpours gathered pace, the orangutans (rather like many of the tourists) made a dash for it.

Once you are at the Rasa Ria resort, you are free to wander the grounds or grab a snack. We ended up playing a round of croquet – not a traditional Sumatran pastime as far as I’m aware but a nice way to pass an hour and brought out the competitive side of our marriage! I lost (I usually do when I’m competing with Pumpkin) but it’s more about taking part isn’t it?

I almost forgot to share my final orangutan tale, one which occurred in Sepilok. We had been warned these creatures grab and were accordingly advised to keep our phones, cameras and food and drink items concealed away securely, ideally in our pockets. This we did and whilst they were out at feeding time, no one got pounced on. We were also advised that one poor, unassuming tourist in recent times had his trousers taken off by an orangutan.

The orangutans had finished their feed and we were making our way out in search of our own lunch, their own greedy appetites stimulating ours. We headed towards the exit along a raised, wooden, walking platform, when all of a sudden, an orangutan came from nowhere and started walking along the ledge of that very platform. When he tried to reach across the platform, we found ourselves just a few yards away from him! It’s not that we were scared as such (it’s hard to be scared when they look so welcoming) but we were momentarily aghast, unsure quite how to react.

Fortunately, the rangers are so experienced and have a truly special rapport with them and ushered us out the way while he coaxed the orangutan into behaving himself. 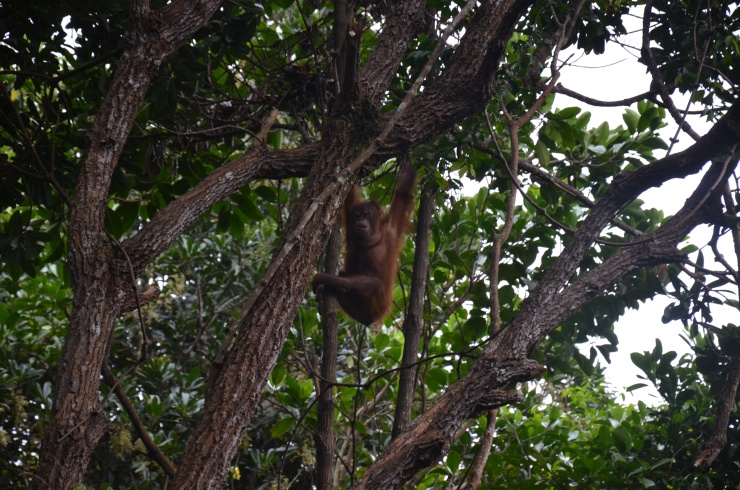 Our guide told us that he wished the tourism industry and the rest of the world would see Borneo as more than just the orangutan. This is true. There is much more to it than that – but if the orangutan is what raises Borneo’s profile to world travellers and the industry, then I think that can only be a good platform from which to start increasing awareness of other endemic species on this rich, lush island.

Do any of these little guys look familiar to you? Get in touch if so – I’ll never tire of seeing pictures of them!