Let me start by setting the scene. I’ve never really been much of a pet person. Growing up, we never had them at home and animals didn’t really feature highly in our day to day lives. It’s not that I don’t like them – I love animals (excluding all things creepy or crawly) and when we got engaged, it took us next to no time to decide that our dream honeymoon would be a safari; of all the travel experiences I’ve had, I’m not sure anything will ever beat the feeling we had spotting wild animals out in the African bush in the first week of our married lives.

So why am I waffling on with these stories on this month’s link up you ask? You see, when the theme of “greatest love on the road” was proposed, there was one particular little beauty that I remembered (and no, it was not this towering and splendid giraffe.)

An adorable kitten lurking in Havana

Earlier this year, Pumpkin and I impulsively headed to Cuba and spent a few days taking in its colourful capital, Havana. One afternoon, we were walking through the Old Town, suffocating in the soaring temperatures, perspiring away our body weight on a heaving street when I spotted a little cutie pie hiding underneath a bush on the side of the road. I pointed her out to Pumpkin and we stepped aside to take a look. I don’t know why I thought she was a she but I just had this gut feeling.

She was tiny, the kind of kitten that would comfortably fit within the breadth of your palms. The pictures don’t reflect her size well because I fell so in love with her that I zoomed in to capture her every feature. A little apprehensive at first, she purred vulnerably when she saw us but we took cautious, quiet steps, wary not to frighten her away. And then she warmed to us and stayed put, seemingly at ease in our presence. But where was her mother? I’m no zoologist but surely a kitten this young isn’t supposed to be out and about alone? 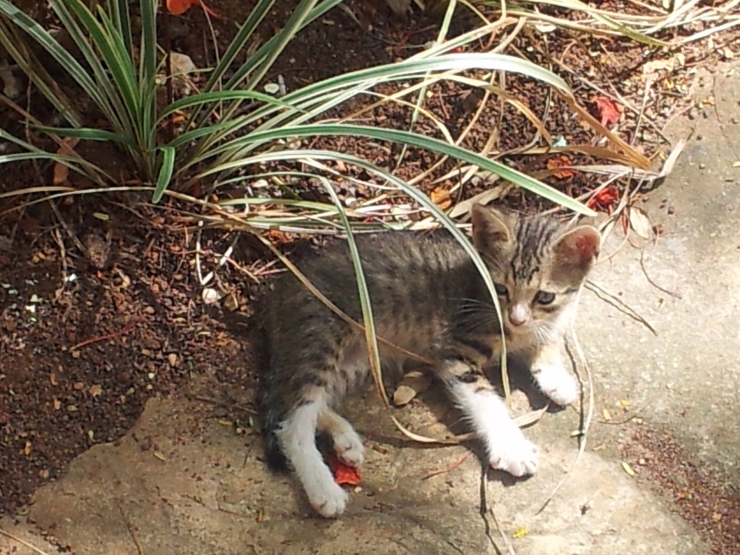 We scoured the vicinity but there was no sign. My stomach started to do that somersault thing it does when I’m nervous, when I’m anxious or when it’s the morning of an exam. Was she abandoned? Was she an orphan? I hoped that her Mother was around somewhere. I couldn’t bring myself to leave her.

Pumpkin by now reached the limits of his interest in the situation. You’ve got to hand it to him for consistency – he’s not a cat-man, he never has been. But seeing that I wasn’t about to leave anytime soon, he sat on a bench near the bush, seeking solace in the shady shadows cast by the trees. I watched my new love rolling around on the bush, hiding from the midday heat. Each purr made me worry for her hunger, her safety and her well being.

But I also felt so helpless. If she were in England, I would know to call the RSPCA. But here in Havana’s old town, I had no idea. And I didn’t know if I even had reason to worry. And so, after nearly half an hour of watching her with love, I left her with a heavy heart. Pumpkin is not known for his great detective skills when it comes to understanding the subtle nuances of female psyche but he spotted my sadness. He gave me a hug poignantly and told me she would be alright. He understood the strange protectiveness I felt for her – which was in itself strange seeing as even I couldn’t understand that.

I hope she’s still wandering around Havana’s old town, plumper, more streetwise and unharmed. I’ve toyed with the idea of getting a cat but if a married couple are going to get a cat, you really do need buy-in from both parties!

Have you always been a pet person or have you ever had a moment that made you think again like I did here?

Part of a monthly travel blog link up with Kelly, Emma and Rebecca.

23 thoughts on “The Mysterious Stray Kitten of Havana, Cuba”