Several years ago, my father took us to his rural family village in Northern India, where he had grown up. We had revelled in the opportunity to witness the simple way of life that had defined his values, aspirations and beliefs, so far removed from the more privileged life he and my mother had carved out for us in a pretty suburban home on the outskirts of London, laden with the creature comforts and material goods that we just took for granted.

My aunt had made us a nutritious meal, characteristically over-seasoned with her proud affection. She cooked it outside the house without electricity and with solid but basic utensils. It was one of the most memorable homemade meals I have eaten in India. We met my Grandmother’s elderly friends, who sat giggling like old school friends at a reunion. We knew it broke every rule in the avoidance-of-traveller’s-diarrhoea handbook to accept the milky sweets they offered us, turning under India’s stifling summer heat with flies hovering eagerly in an unwelcome orbit above the box. But to decline them for reasons they would never comprehend, to see the look of bemused hurt in the eyes of these elderly women, whose lives had demonstrated more resilience than I had ever known, that was an outcome too unpalatable for my conscience so I took my chances and accepted it gratefully. The taste was much the same as most other Indian sweets (I have never taken to them) but their look of joy was satiety enough.

Ever since that village experience, I have had a newfound appreciation for understanding village life in different world cultures. When we see a nation’s capital, we skim just one layer of cream, the financial districts, the eager young professionals that have migrated to pursue career ambitions, to earn for their families far away, the hub inhabited by politicians and world leaders, by camera-wielding tourists. But grasping the true foundations of a country surely occurs at the grassroots level in the small towns and villages where the majority live and die.

Nyoman was our guide for a day trip we booked with Bali Traditional Tours. The voracious monsoon rains had taken their toll on the day, nourishing the lime green plains of the Jatulawih rice paddies with a soggy glaze.

As he navigated us through the bumpy roads that led back to Ubud, Nyoman announced that our last stop would be at a traditional Balinese village compound. What we didn’t know until then was that it was to be his own home and village. Most traditional Balinese families live within a family compound in villages that may have a population of around 700 – 800 people. Family compounds typically contain several homes for different members of the extended family. Nyoman’s home compound comprises three families and approximately 28 people. With three bathrooms between all of them, the queues for a morning wash can be long!

The picture below gives you an insight into a Balinese village kitchen. They have no fridges – food is all made fresh, one day at a time and shared amongst the whole family. Ingredients never go to waste. It dawned on me that there was so much I could learn from this set up and I remained in awe of how delicious Balinese food is, stemming from these village kitchens, far out-flavouring anything I could ever whizz up with my food processor or hand blender.

We walked in to the sound of children giggling, a little girl having her hair plaited and 2 young men helping with DIY. How simply these mundane daily sounds and sights transcend the boundaries of geography, language, income and culture. Most compounds contain a small family temple with a raised platform, which is separate to the village temple. The family temple is where family ceremonies and celebrations may occur such as those performed shortly after a new baby is born or a baby-naming ceremony that often occurs at the age of 3 months. 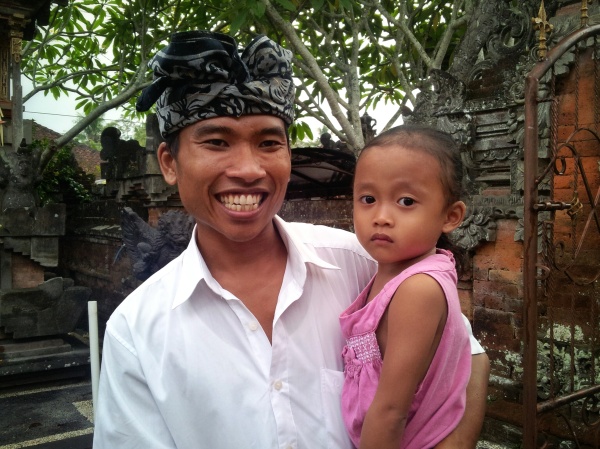 Nyoman would have had to participate in this ceremony twice over simultaneously, having been blessed with twins, one little girl and one little boy. We met them together with their cousins, all of whom seemed inseparable and each with their own unique individuality – a cheeky one, a quiet one, a playful and a ringleader of the group. They were so full of glee picking up flower petals, fallen from the trees that shade their homes, tirelessly running towards us and dropping them playfully in our palms.

In Balinese tradition, the placenta is given to the parents after birth for burial in the ground of the family village. A religious offering is kept above it, which is removed once children reach puberty.

We felt blessed to have had a chance to meet Nyoman’s parents, his mother had been working hard that morning looking after the children, whilst his wife was out teaching traditional Balinese dance. Nyoman’s father is one of the few local village priests, blessing and overseeing religious ceremonies across the entire village as well as his own family compound. And it’s not just the sound of toddlers fighting and running around that liven up the compound. If you hear a pig in the distance, you’ll be led to the animals kept at home for rearing and selling.

The Balinese people would know without inquiry that Nyoman was the third born of all his siblings and we were to learn why. Balinese naming tradition dictates that each third born child is known as Nyoman, the fourth born son as Ketut, the first as Wayan etc. I was intrigued with this unfamiliar custom, in which so much history is embodied within one name, how large a family is, how many siblings, how busy their mothers must have been. In school, second names are used instead for ease as so many children inevitably have the same names!

Intrigued about his journey into the company, Nyoman told us he had been involved in the tourism and hospitality industry since the tender age of fourteen. He would return from school and then work at a small hotel in his village. There, his voyage would progress from gardener to driver to housekeeper with an insatiable enthusiasm to learn English.

In the last couple of years, Nyoman and his cousin set up Bali Traditional Tours, now one of the most highly rated tour companies in Ubud and in Bali overall, a huge achievement for a company so new.

I received no incentives, sponsorship or request from the company to write this post but every so often, you come across a group of individuals, who overwhelm you with their work ethic, welcoming nature and huge smiles and after the special day we spent with Nyoman, I wanted to share that with you all. We took the Bedugul tour but they offer a range of tours, depending upon your interests.

Seeing his village was one of the highlights of my entire trip to South East Asia. There was nothing staged about it, no ploys for donations, no gift shops that they want you to buy from. They are truly passionate about their culture and way of life and want visitors to have an insight into that. We were at the family compound less than an hour and that hour was worth weeks of education.

Have you visited a traditional family compound in Bali or elsewhere in the world?

35 thoughts on “Village Life in a Traditional Balinese Family Compound”