“We will be visiting some of Budapest’s most grand and historical cafes and also some of the best independent new wave coffee shops” our tour guide told us. What type of coffee do you both usually drink? Long or short?”

Pumpkin and I exchanged a subtle but awkward glance. I wasn’t entirely sure what the correct answer was but an instinctive hunch was telling me that it wasn’t “Frappucino with sugar-free hazelnut syrup and no whipped cream.”

I may not have been a coffee aficionado prior to starting this tour but three hours later, I felt readier than ever to branch out from my longstanding love of tea. That’s the thing about a great food tour – it reaffirms your love for some things (cake, cake, always cake) and flirtatiously teases you into experimenting with others (coffees, sweet wines and chocolates with tarragon?!)

The Taste Hungary Dessert and Coffee Tour of Budapest

Within just a few hours of our arrival in Budapest, we happily found ourselves on an intimate Taste Hungary culinary tour, accompanied by one fellow food fiend, a passionate local guide and one of Budapest’s most savvy baristas who was learning the guiding ropes and sharing her oodles of expertise on all things coffee in the process.

All good foodie experiences commence with an aperitif and this one was no different with the delicate taste of Hungarian Tokaj dessert wine served to us by a sommelier in the basement of a fine Budapest wine store, as we all became acquainted with each other.

And for any regular readers who are wondering if I tasted some, yes I did and I must say, even to the alcohol naïve palate, these amber notes went down a treat. I could easily have indulged in a little more but if I did ever fancy toppling into a state of alcoholic stupor, I certainly wouldn’t do so at the expense of cake!

But all good things come to those who wait and before biting into the decadent slabs of Hungarian cakes awaiting us, we started off our Saturday afternoon with a caffeine hit, as so many locals do, at one of the new wave coffee shops.

London is filled with branches planted on every corner by giant international coffee chains and whilst I won’t pretend I don’t occasionally drop in on them, there is something far more refreshing about the smaller, independent tea and coffee houses that represent a different movement altogether. These third wave establishments have an emphasis on artisanal produce, ethically sourced ingredients, the entirety of the journey from coffee plantation to bean to cup and an appreciation of the most delicate and subtle flavours embodied within the drink. 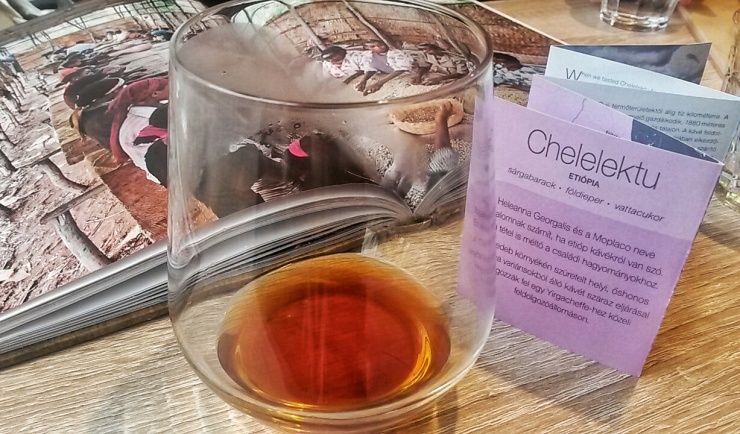 The standout drink of the day for me was the Cascara coffee, a drink made from the dried husks of coffee cherries collected after the coffee beans have been removed from them.

With a fruity undertone to it, I couldn’t help but raise my glass for another sip every few seconds. I described it to Pumpkin as tasting more akin to a “coffee-flavoured herbal tea” and interestingly, when I read more about it upon returning home, I found that it is indeed often referred to as coffee cherry tea. 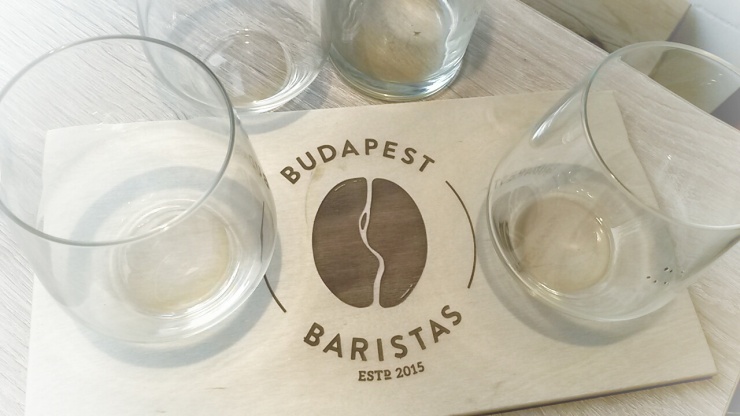 Wines and coffees aside, however, any sugar monster who books themselves onto a dessert tour is ultimately after one thing and our first dessert hit came in the form of a Sacher torte, which many of you may thought of as being an Austrian classic. Indeed, I tasted Austrian Sacher at Café Sacher itself during my Christmas Market break in Vienna and Salzburg a couple of years ago but we were told the Hungarian version is a little more moist. With my eyes shut, I am not sure I would have spotted a difference and frankly, I didn’t dwell on it for too long before piercing away with my fork. It’s a little like comparing shiny diamond with shinier diamond – one may have the edge but you’re not about to say no to either! 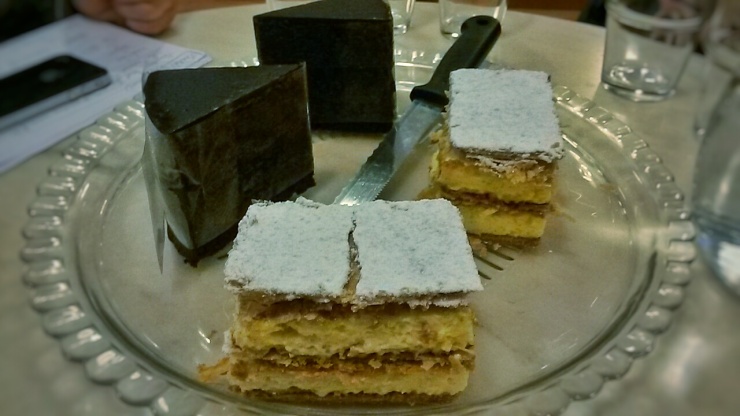 The Kremes cake (cream cake) that accompanied it contrasted in colour and texture with decadent, fluffy custard cream sandwiched between layers of melt-in-the-mouth flaky pastry. This, too, reminded me very much of the renowned Kremsnita Cake from Lake Bled, Slovenia so I was starting to see that whilst these nations have their own distinct geographical boundaries, the cake borders are much more fluid. 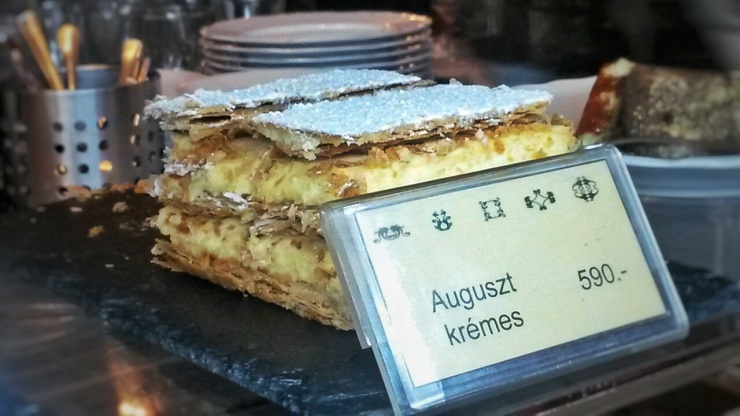 But where are those traditional Hungarian Dobos torte cakes I hear you ask, the ones you saw so diligently made on the Great British Bake Off with layers of soft sponge sandwiched with chocolate buttercream and topped with caramel and named after a famous Hungarian confectioner? 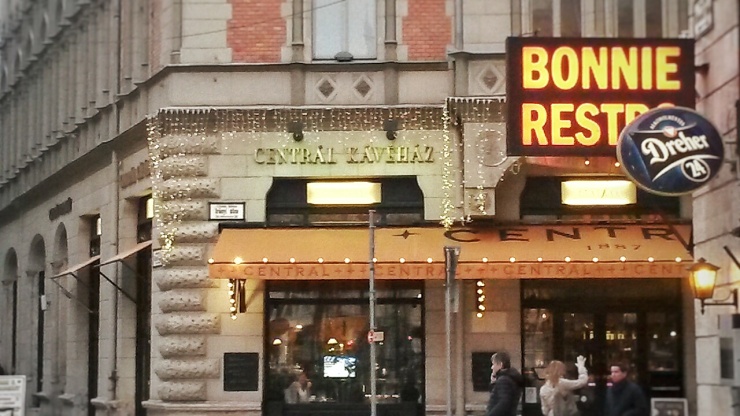 They appeared at our next stop, Central Kavehaz, a high-ceilinged iconic coffee-house with old world glamour that once served as a safe and welcome working and meeting space for poets, authors and artists.

As we sliced through the stack of creamy uniform layers of our cakes, we remembered that the café, where we now so effortlessly enjoy a late afternoon snack, once held such significance in shaping Budapest’s cultural and artistic heritage.

Although the Dobos torte has achieved the greatest fame, there are many other layer cakes filling shelves in cafes all over the city and you must not leave the city without indulging in at least one!

Some of you may be fearing that the sugar highs of a tour like this will leave you feeling a little queasy in the tummy and overfull but like most well-planned food tours, we were doing so much walking in between stops, taking in the architecture, learning about the history of the city and chatting like a group of friends that we always felt ready for another small bite whenever we reached our next food stop.

I always find that food tour guides are great people to steal tips from for other restaurants to seek out during your visit. We want food tips from locals. We want recommendations from those who know the city’s hits and misses and consider themselves foodies and when you ask a food tour guide, you’re getting all of that in one go so are almost guaranteed to be pointed toward something special.

Saving the best till last, the most surprising find of the day came at the end of the tour when we were introduced to a tiny chocolate shop, which has recently received an award at a renowned international chocolate festival.

Run and founded by a husband and wife couple who had a background in graphic design, their fresh and stylish artistic designs are featured on both the packaging and the chocolate itself.

I have never taken to marzipan in the past but the bergamot infused version here was one of the most irresistible pieces of chocolate I have ever enjoyed and they had a clear grasp on innovative flavours that have a chemistry when paired, such as chocolate and tarragon.

We were advised on the tour that it is worth returning again during our stay. We took their word for it and had absolutely no regrets. I have previously blogged about my favourite chocolate shops in Brussels as well my top chocolate finds in Bruges but this little artisan chocolatier has some of the most creative chocolates I have ever come across. 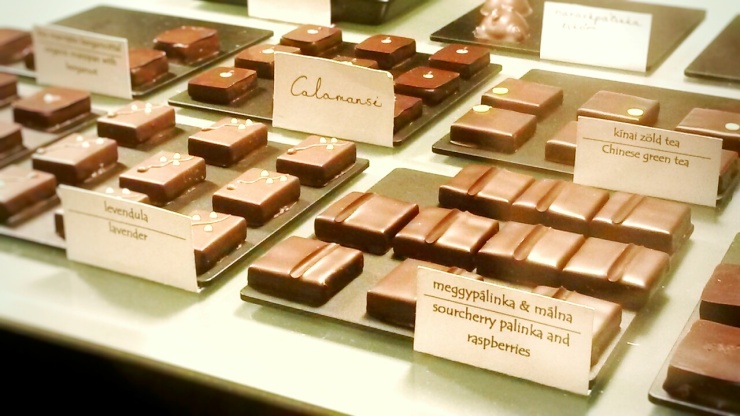 On my last visit to Budapest a decade ago, I must admit I took very little notice of the foodie scene, which is something I cursed myself for as I got older and increasingly heard rave reports about the quality of the cuisine out there so for anyone with a penchant for the life’s sweeter treats (or really great coffee), an experience like this will certainly help to avoid that FOMO when you get home. 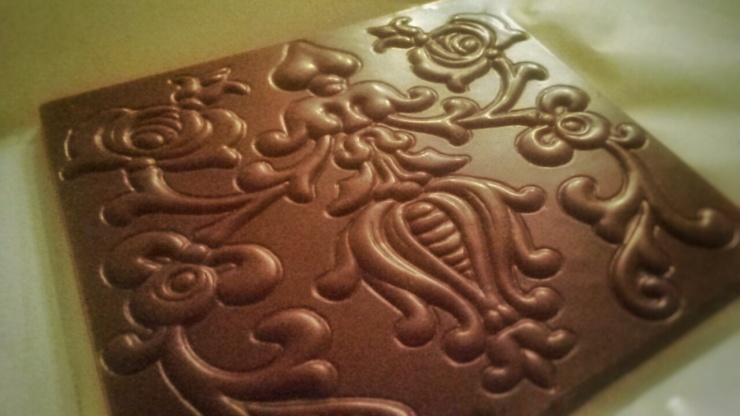 Disclaimer: We were guests of Taste Hungary during this tour but I firmly believe that no one should waste calories on bad desserts (!) and would only ever share my own opinions. As for my own cakes – there’s no sharing. Period.

If you love exploring local flavours on your travels, read more about this great food tour in Ljubljana, an authentic Marrakech food walk or a dessert tour in London.

Are you more for the savoury or the sweet foods in life?

42 thoughts on “A Coffee and Dessert Tour in Budapest”