Did anyone else gawp in bemusement during last week’s opening episode of the 2016 Great British Bake Off, when Paul and Mary appeared never to have heard of matcha? No? Just me then. I accept I may be on one end of the spectrum (stark raving matcha mad) but as two of the country’s leading celebrity bakers, I certainly didn’t expect them to be on the other.

It did help me to re-frame my perspective though as frankly, unless you fall into the categories of (a) world foodie (b) all-things-Japan obsessed or (c) happen to do your weekly shop at a Japanese supermarket, there is really no reason why you should know about it.

Take my mother for example: her’s is one of those “name an ingredient and you’ll find it in here” kind of larders – and even she has never had a tin of matcha powder in there.

Green tea aside, I had forgotten that I have a serious miso-glazed weakness for plenty of other dishes found in the Japanese flavour palette and not long after arriving, I found myself on an inadvertent mission to sample as many as possible of the must try foods in Japan (trickier than you may imagine in a two week trip and I almost never ate the same thing twice.)

Think of this as Japan’s take on Schnitzel – breaded pork that has been fried with a tasty outer crust shielding the most tender pork meat interiors and accompanied by rice and sauce. Thanks to a tip-off from Tokyo resident and blogger Nano, we headed to Maisen Tonkatsu  on our final night in Tokyo. 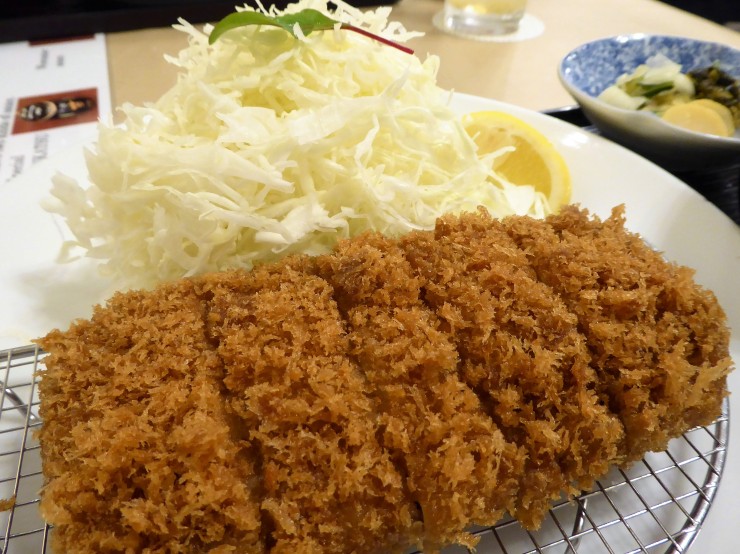 It was a leap of faith as we sacrificed our proposed plan to attend the bonkers Robot Show in order to sample this Tonkatsu but any intentions we had to slowly savour each mouthful fell to pieces as effortlessly as the tender Tonkatsu did in our mouths. Would we go back and play choose our night differently? Not a chance. 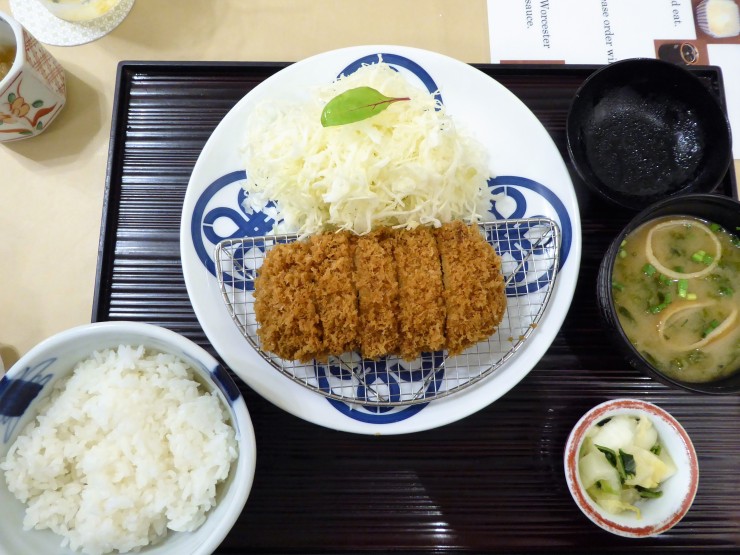 Parking somewhere between an omelette and a Japanese savoury pancake, we found ourselves spoilt for choice for Okonomiyaki at Hiroshima station. The fabulous thing about Japan (and many other Asian destinations) is that you don’t have to fork out on flashy restaurants to score top-notch meals.

Some of the most saliva-inducing feasts we enjoyed were found at shopping malls, train stations and shabby basement restaurants, exemplified by this Okonomiyaki, cooked on a hot plate and packed full of prawn, squid, shredded cabbage, green onions or sometimes with other meats in place of seafood – a snappy, speedy and oh-so-tasty one plate meal.

There was only one occasion in Japan when I ate noodles that weren’t submerged in broth and that was during my lunch of Yakisoba noodles at the Shibazakura Festival. 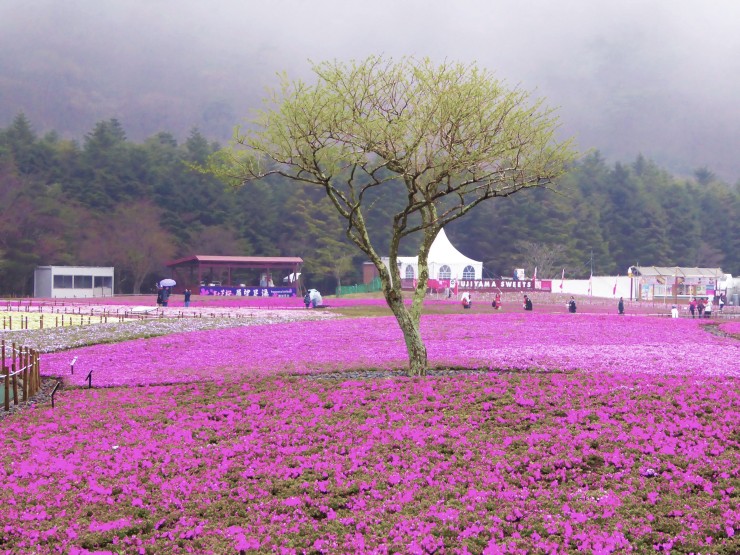 These thick buckwheat noodles with pork and vegetables were served to us straight from pan to plastic plate and lent all the insulation I needed to compensate for being under-wrapped for the chilly mountainous air. 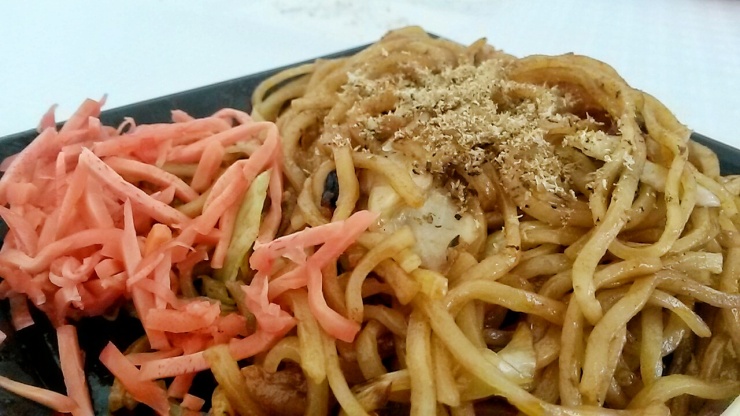 For those who eat neither fish nor meat, sustaining a diet of traditional Japanese cuisine during your Japan visit may prove tricky and will certainly take some planning but vegetarians, fear not – tofu is your friend and is found in abundance. Find it fried or steamed, battered or soaked in broth; personally I love them all and even if the very idea of soya-based, cuboid food makes you wince, the silky satin feel of authentic Japanese tofu may just sway you. 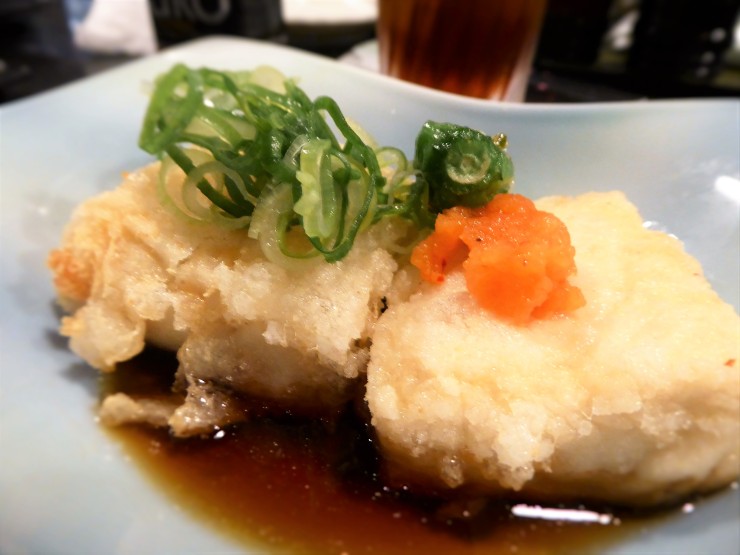 A famed street food from Osaka, Takoyaki was the one and only item from this list that I had never heard of or come across until I arrived in Japan. 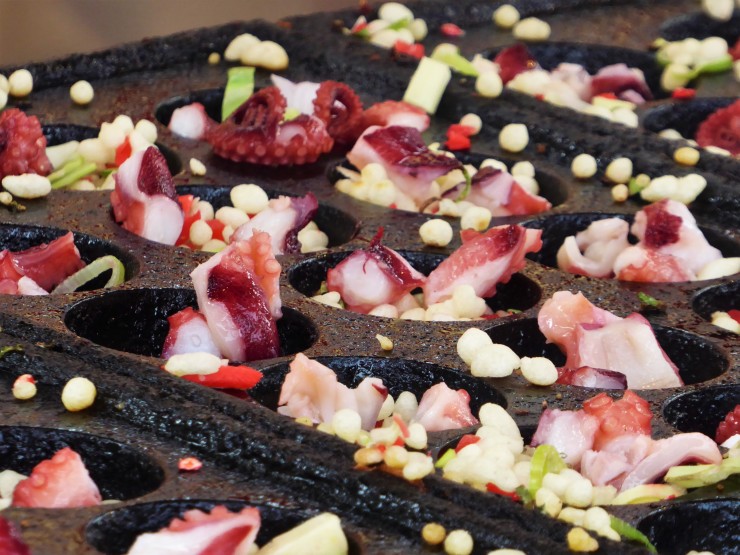 Another one to shy away from if you are averse to seafood, the substance of these spherical snacks is not dissimilar to Okonomiyaki in the way they are made from a batter, this time poured into round moulds. 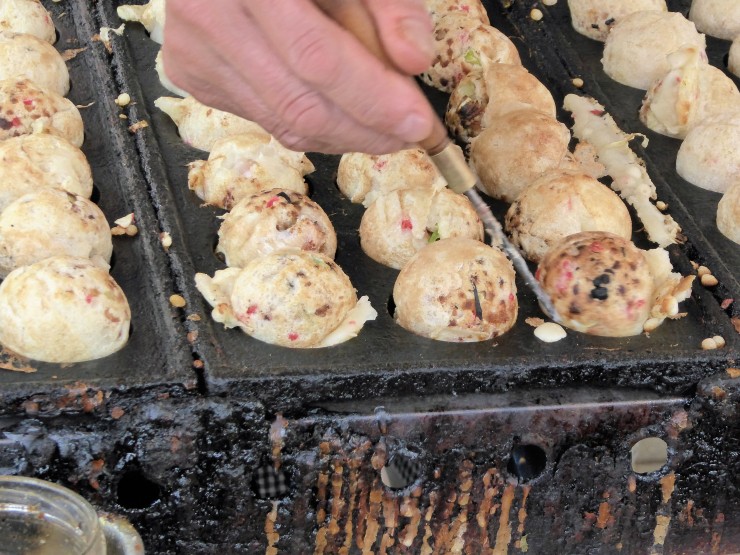 The key ingredient in Takoyaki is chopped or minced octopus and these savoury rounds are typically served with a drizzle of mayonnaise and a dusting of dry fish flakes. 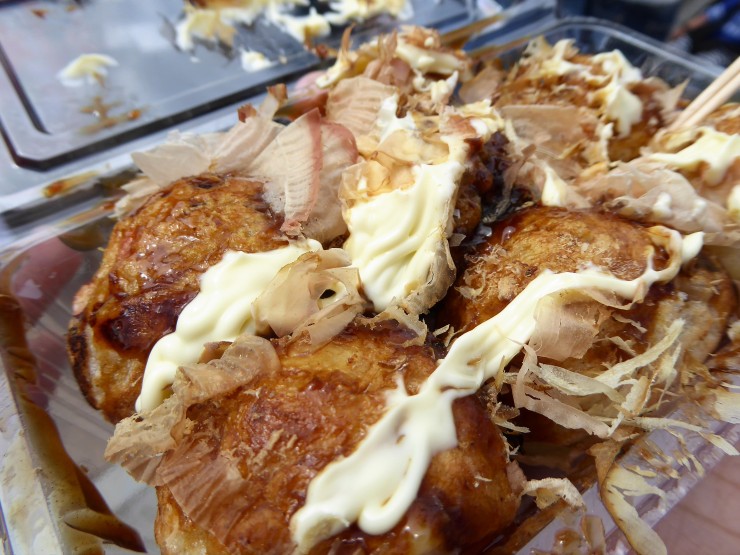 Pumpkin devoured these but I must admit they weren’t to my liking, primarily as I’ve never been one for eight-legged food.  😀

What is any kind of round-up of must-try Japanese foods without sushi and sashimi?! In London, I have a tendency to veer towards fanciful, colourful, innovative Maki rolls. 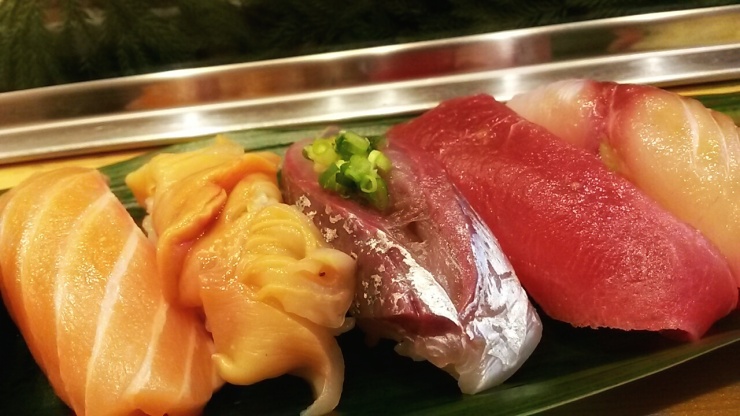 In contrast, in Japan, there is a simplicity to the sushi and sashimi with the emphasis on quality, flavour and preparation of the fish without the distraction of other ingredients and accompaniments.

From conveyor belt sushi in Osaka to an early morning sushi breakfast at Tsukiji fish market in Tokyo and even to the takeaway boxes of sushi we would grab for our Bullet Train lunches, my only regret about the sushi in Japan was not having more of it!

Fellow foodies and Japanese cuisine addicts may be horrified to hear that the first time I ever tried Ramen was 4 months ago in Osaka. Whilst there is no better place to break my Ramen virginity than in Japan itself, I suspect the bar has now been set so high that nothing will ever live up to it again. And for those of you still to break your Ramen celibacy, it comes in a variety of styles and forms but in essence, is a form of noodle soup, often served with a pork topping.

I have never warmed to the concept of noodle soups but after the first spoon full of mouthwatering pork Ramen on our final night in Japan, I quickly realised that you never quite know till you try!

Vegetables are the one food group that I find lack most from my diet during my travels but I hoped I was taking in at least one of my five a day (albeit fried) when I bit into the powdery soft pumpkin centre encased within the crispy exterior shell of the pumpkin korroke (that’s croquette to you and I.) And this time I am talking about literal pumpkin rather than my Pumpkin! 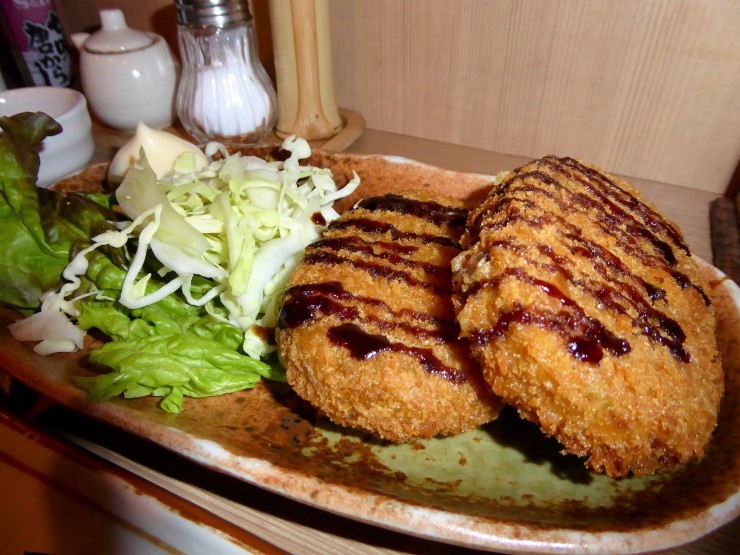 That’s not to say all my vegetables arrived in deep-fried form. Nasu Goma, for example, is a dish I order just about everywhere I spot it and Japan was no exception. The sleek, grilled layers of aubergine (or eggplant if you’re that way inclined) come glazed with a Miso gloss. 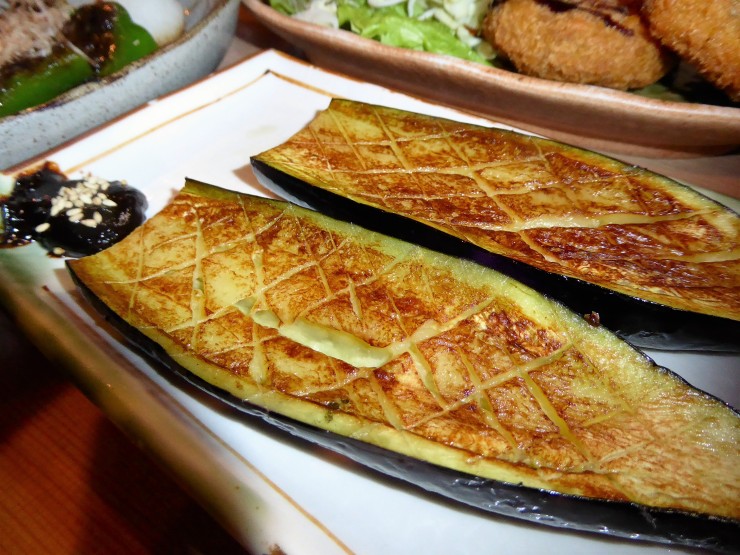 Whilst this one and the next one are some of the better known Japanese dishes you may already be familiar with, they undoubtedly remain among my favourites. A well-made tempura batter encases its filling (typically seafood or vegetables) with such a light lift that I found myself wondering if my prawn was about to levitate gracefully into the atmosphere. 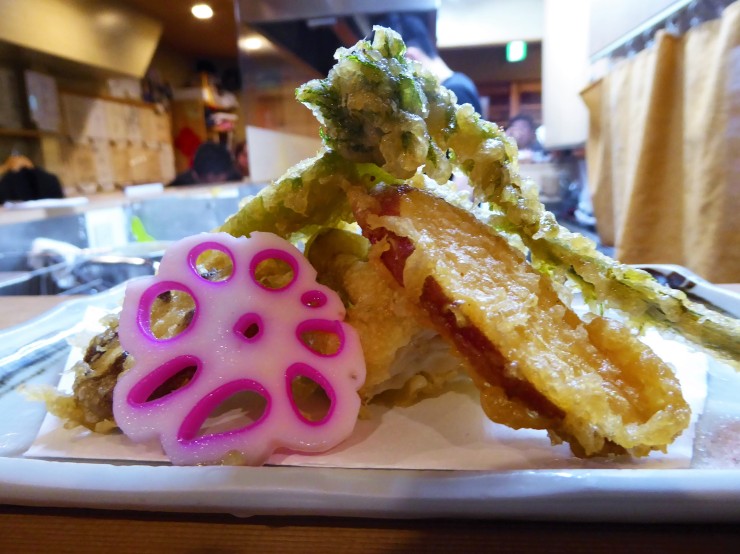 With most fried foods, the richness takes its toll on your appetite after a few mouthfuls but rather dangerously, with the airy quality of tempura, these safeguards against greed no longer hold true. After a night of sleep at Tokyo Airport, I cannot begin to describe how satisfying and comforting our tempura meal was as our first dinner in Japan.

With Gyoza, we didn’t even attempt to apply the brakes. Having managed to beat the queues at Harajuku Gyozaro, queues that elongated within minutes of us taking our seats, we took more of a “eat gyoza like it’s your last meal on earth” approach with a mix of boiled and pan-fried Gyoza. 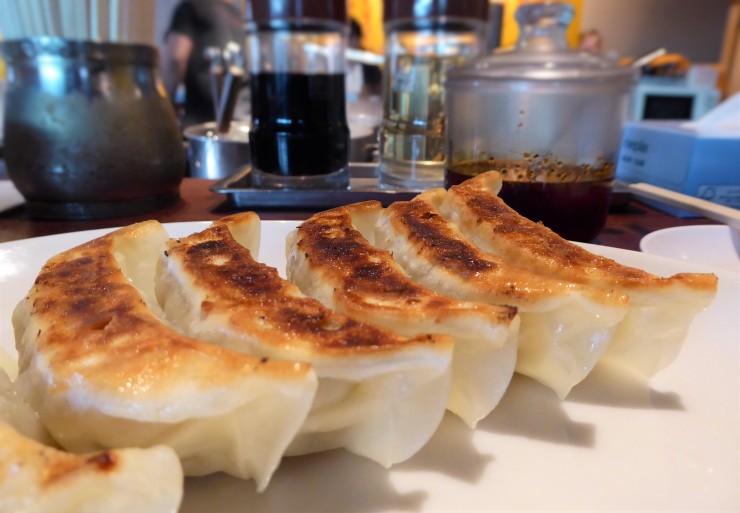 Unsurprisingly from the title of the restaurant, these bite-size dumplings are all they serve and they have honed it down to a fine art. If you are seeking a good plate of these pork filled Gyoza dumplings in Tokyo, this is a great find right in the heart of the Harajuku area. 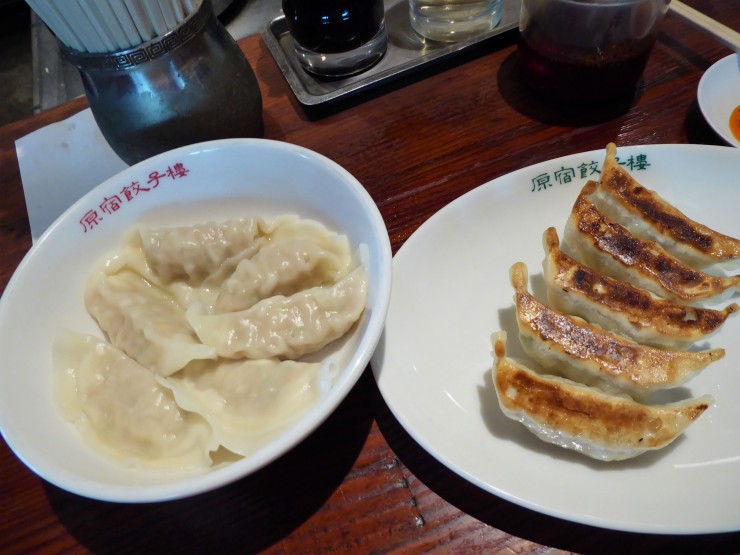 Another street food favourite in Japan are the Yakitori, conventionally grilled chicken that has been skewered, seasoned and cooked on charcoal grills.

On the streets of Tokyo and Osaka, these were a perfect informal bite after a long day of sightseeing but we could perhaps have been accused of being a little un-adventurous by sticking with conventional cuts of chicken and not opting for the array of innards and cartilage on offer for more thrill-seeking diners!

When I recently shared some of my top travel tips for Japan, I made reference to the fact that our Ryokan stays were by far the most memorable of  our visit and Kaiseki dining is to a Ryokan what glamorous dining is to an iconic 5 star hotel. These traditional, intricately-presented, multi-course Japanese menus are filled with numerous small items, cooked with subtle, simple flavours from an array of differing culinary techniques.

Of course, it is not imperative to stay in a Ryokan to partake in a Kaiseki meal with many restaurants serving Kaiseki cuisine but served in the comfort of your own Ryokan room, the in-room Kaiseki dinner experience escalates the concept of a room service meal to an entirely new level of elegance and tradition. 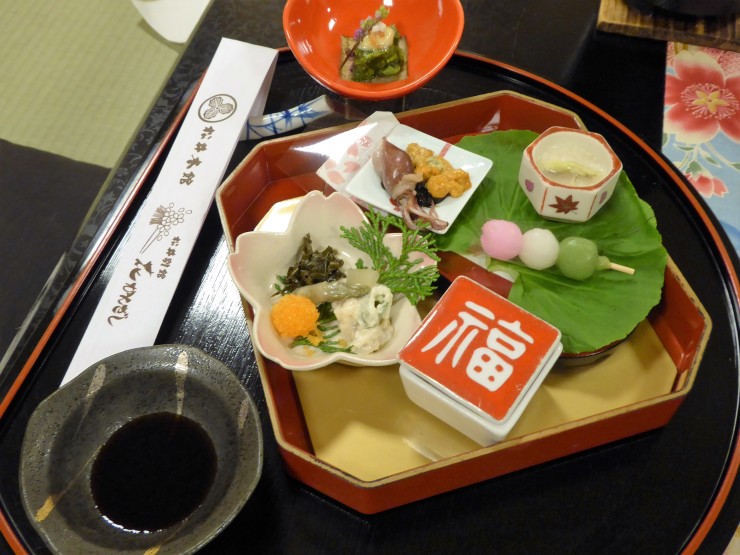 It is an absolute must-do during a visit to Japan, particularly in Kyoto, a city that harbours a loyal allegiance to the Kaiseki traditions.

You remember earlier when I said that you don’t need to do the whole fine dining thing to get a great meal in Tokyo? Well, you don’t – but it’s still exciting to don a frock occasionally right?

We decided to try out one glamorous dining experience during our time in Tokyo and chose the Kozue restaurant at the Park Hyatt, a hotel made famous after its eminent presence in the film, Lost in Translation. I am a bit of a hopeless romantic and time and again during my online searches for “romantic restaurants in Tokyo”, the name Kozue kept recurring. Plus, it was really near our hotel and I can’t walk in heels so it was a no-brainer.

With a dazzling view of the Tokyo skyline seen from our window-side seat on the 40th floor of the hotel, we ordered from a multi-course menu of contemporary Japanese cuisine, which mostly, we loved but at times felt a little bit too experimental even for (amateur) Japanese food fans like us.

As with most skyline-view restaurants, you pay for the view as well as the food so this meal ended up costing more than all the other ones combined but it was worth it to dabble in the vibe of Japan’s swanky, high-end dining.

Tonight, dinner came with a wee bit of a view @parkhyatttokyo If all you're seeing is a blur of dazzling night lights, it's because that's all we were seeing too, stretching as far as our eyes could take note of & plainly impossible to gaze away from. Sweet dreams from the electric city of Tokyo 🎇🌇🌕🌎

The Ones That Got Away – Wagyu Beef and Puffer Fish

The 15th inclusion is a little cheeky on my part as however “must try” they are, I left without trying them! I don’t eat beef at all so it was a no to the Wagyu and I don’t like my food to be fatal so I took a rain check on the puffer fish but considering we were there for less than a fortnight, I was fairly content with achieving 15 of the best must-try dishes in Japan.

And for those of you astute enough to be wondering why all the matcha has disappeared into the ether after I shamelessly devoted the entire introduction to it – I owe its absence to the fact that when I reached the end of this post and looked at the approximate word count, I simply couldn’t bring myself to push your reading limits any further by doubling its length with my dessert hit list. My Japanese sweet treat guide will be on its way to you shortly! 🙂

Do you have a taste for Japanese food? What would you add to this list?

Part of a monthly travel blog link up with Emma, Angie, Jessi and Tanja