Before I went on my first cruise last year to the Caribbean, I rather naively assumed not much planning was required. Pick a destination. Pick a cruise liner. Pack your passport and you’re good to go, right?

That there is the approach of a novice first time cruiser. The savvy cruise-traveller will already have considered the large ship vs small ship experience and have sifted through the array of reviews on Cruise Critic (the cruise world’s answer to Trip Advisor;) they would have bagged a bargain on drinks and internet packages and be able to counsel you on the pros and cons of independent excursions vs cruise liner excursions. 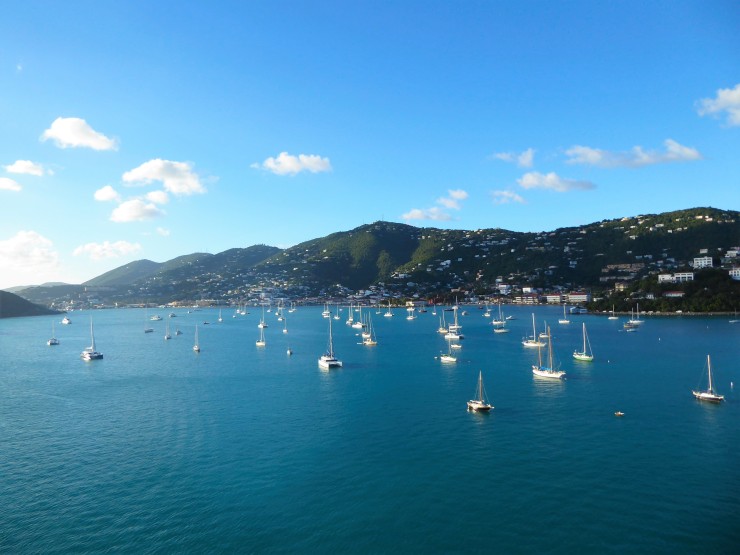 I’ve already shared my first impressions of cruise travel in general but if the terminology above sounds like a foreign language to you, you’re in the same mindset that I was in around about a year ago and I hope this post will give you more of a flavour of what to expect on a cruise ship and certainly on Celebrity Summit itself. I had no media affiliations whatsoever during this cruise and was just another regular, fully paying customer (who happens to enjoy blogging and blabbing on about travel!)

I hadn’t given much consideration to the actual style of the ship cabin room. I am not usually fussy about hotel room views but my in-laws (the seasoned cruise travellers in our clan) suggested investing in an outward-facing, ocean view room to allow in some natural light and to avoid the cabin fever experience (mind the pun).

Sounded like solid advice and I took It dutifully, still harbouring the slight apprehension that we would feel boxed in to a tiny room for a week. 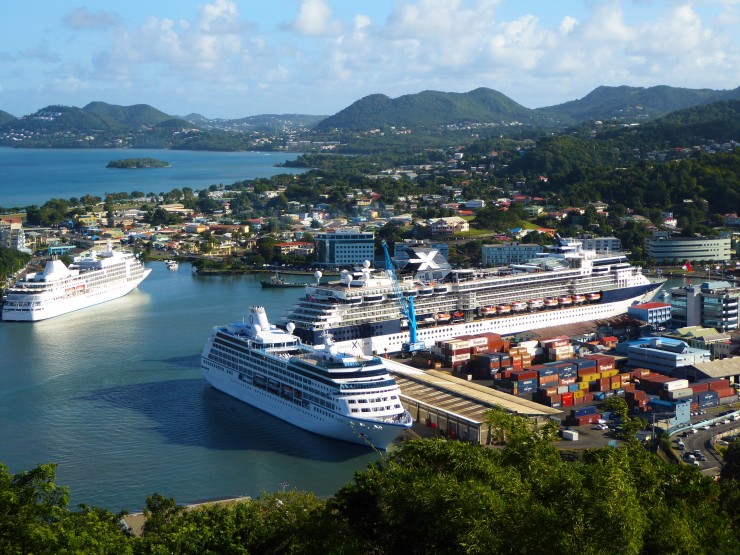 As it emerged, as with many aspects of the cruise, I ended up being pleasantly surprised with the rooms on Celebrity Summit. Whilst our cabin was a far way off from being as roomy as this luxurious villa in Bali or this garden-view room in the Seychelles, it was more than spacious enough for all our clothes, belongings, cases and a darn sight bigger than some of the European city hotels I have stayed in the past.

I wrongly assumed that only the suites would lend simple luxuries such as coffee tables and sofas but on the contrary, the cosy living area in our ocean view room provided a quiet spot for us to nibble on (ok, wolf down) our takeaway desserts from the ship patisserie and for me to catch up on some writing whilst Pumpkin took an afternoon nap. 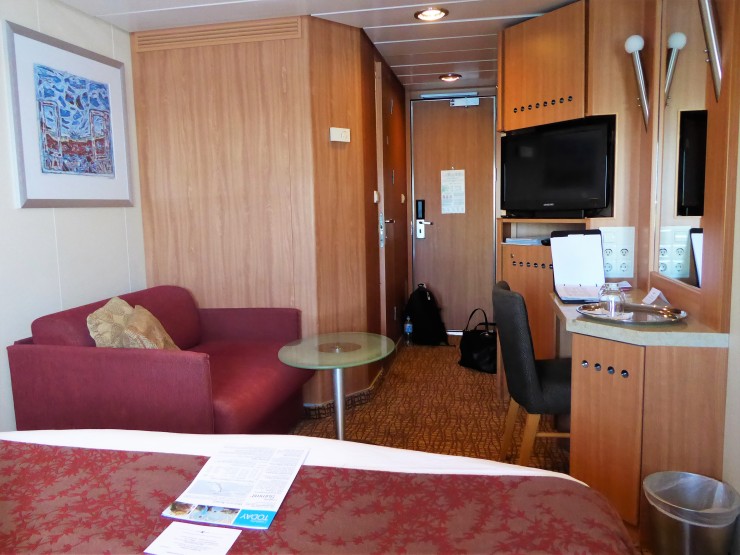 And if there is one creature comfort above all others that I hope to see from any accommodation on my travels, it is a functioning, clean bathroom so I am pleased to report that our ensuite shower room and toilet, although compact, was designed very well to make maximum use of its space and contained all the bits and pieces you would expect to find in a hotel bathroom – shower caps, hair dryers etc.

The only issue we had in the room at all was a misunderstanding regarding bottled water. I’ll spare you the dull details but essentially, some bottles were complimentary, others weren’t. A card detailing prices was missing and the net result was that we were charged (an extortionate price) for a bottle of water we innocently thought was free of charge. Pumpkin raised it with customer services, whose approach teetered on the clinical and dismissive side but we have our wonderful room attendant to thank for resolving the issue and his warmth and hospitality throughout our stay was faultless.

Truth be told though, there is so much going on a cruise ship that time in our cabins was fairly limited. 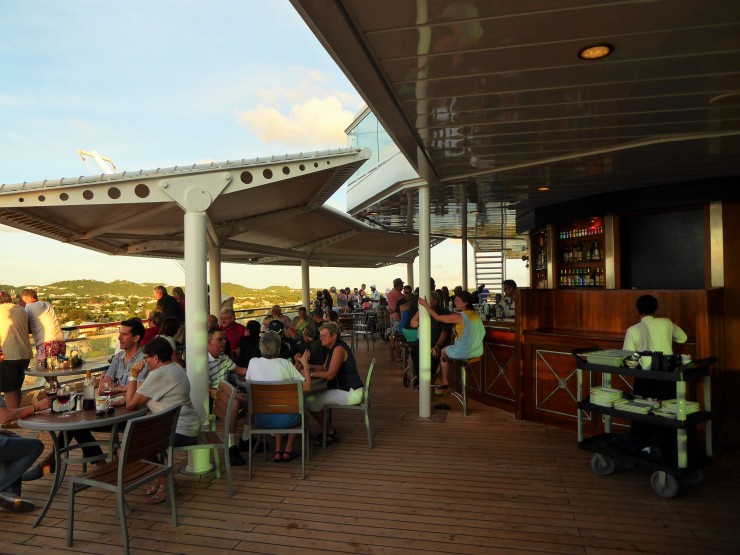 After spending each day in a different Caribbean island paradise, we joined the masses at the Sunset Bar, conveniently adjacent to the buffet restaurant where late afternoon saw the emergence of freshly made sushi, pizza and bespoke pastas. It was also the place where new friendships were born. 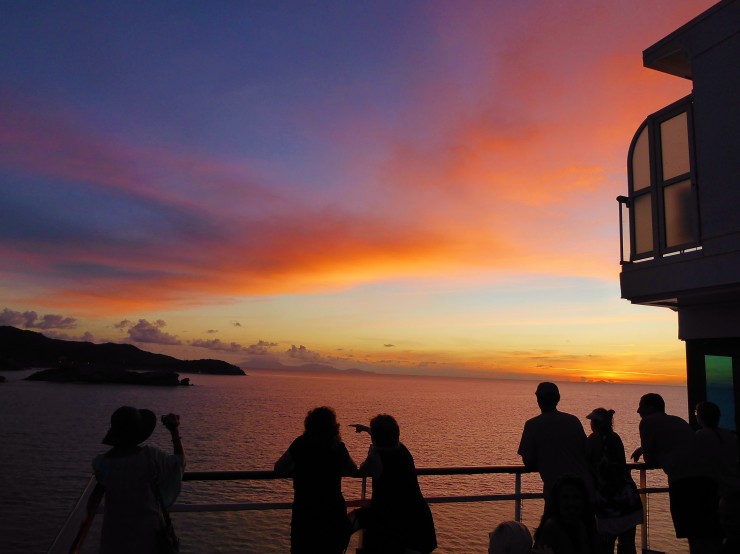 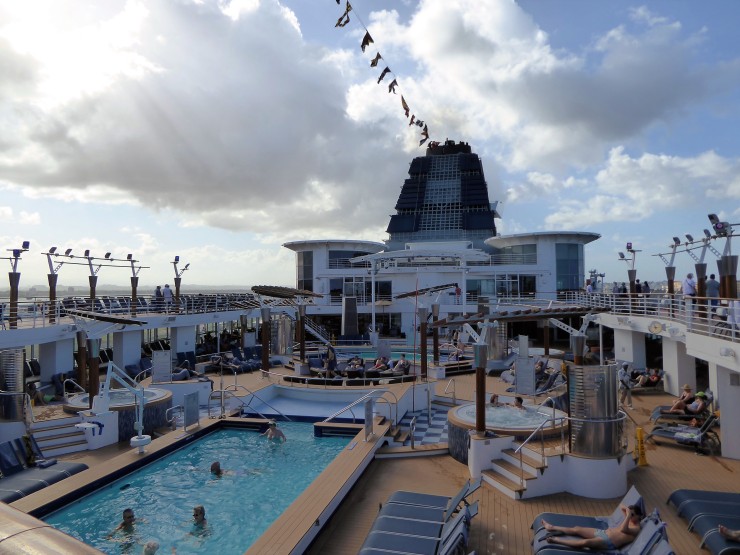 On the most blissful of days, we went straight from a dip in the emerald Caribbean sea back onto the ship before plunging straight back in the pool.

You either love poolside entertainment or you don’t and there’s plenty going around for those who do but we were more captivated by the exploring the views from the deck, revealing clusters of bold and bright houses. 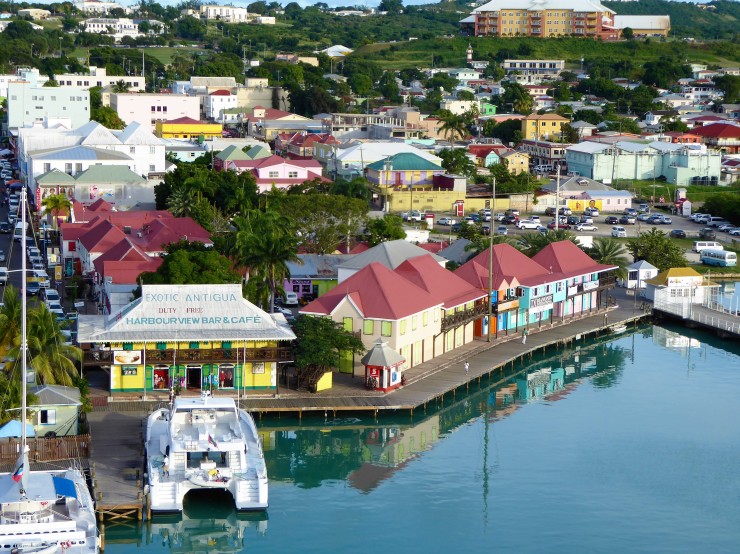 And even the arc of a rainbow piercing the ocean.

The most dangerous discovery for the arteries occurred on day 2 or 3 when we came to the realisation that the cake and coffee shop was all included in the price (up till then, we thought it came with an additional charge.)

And so, to round off a week of indulgence, a 4pm cake ritual to the sound of familiar harmonies from a gifted live pianist became something of a surreal but sublime daily norm.

As the day progressed, a 3 course dinner in the formal restaurant signalled only the start of evening proceedings with entertainment pencilled in most nights (don’t knock it till you’ve tried it – it was a serious cut above the usual Michael Jackson impersonators that have a way of rocking up at all-inclusive resorts across the world!) 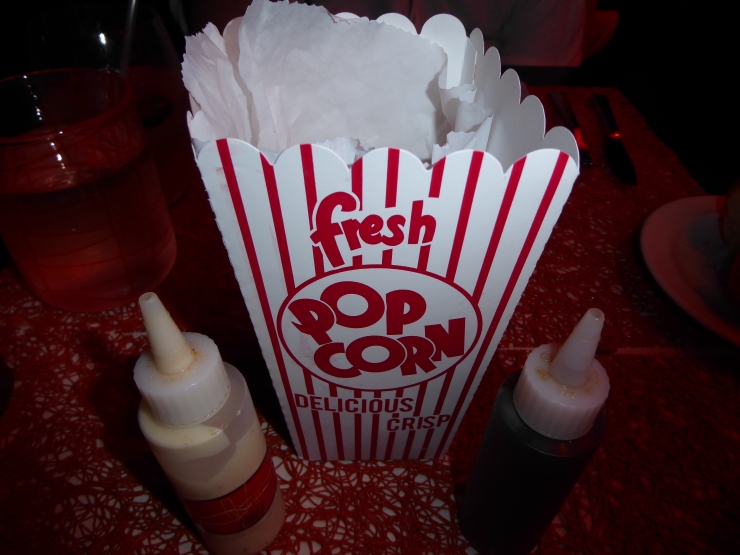 On our first evening though, we made the most of the special embarkation day offers at the a la carte restaurants in order to try out the outrageously funky Qsine Restaurant where everything from ordering to serving to tasting came with unexpected sci-fi-esque twists. It felt a little like dining in the year 3000. 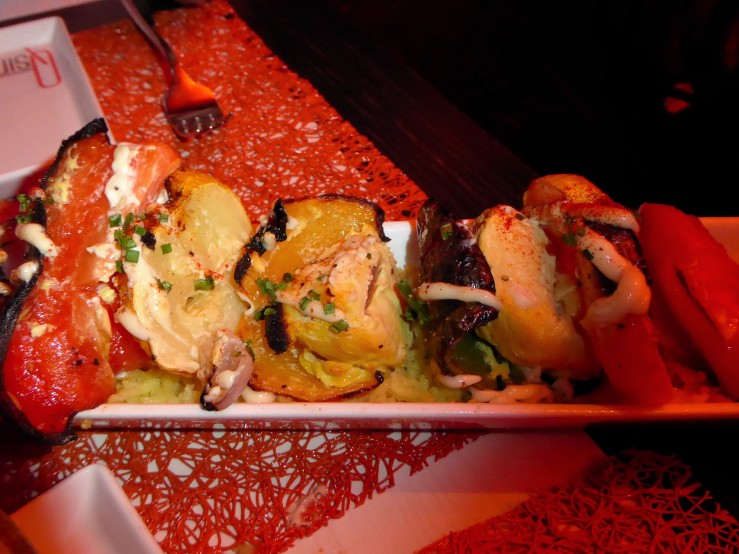 We ordered on gadgets that displayed all the menu options and combinations.

Munched on sushi lollipops, which I like to think was practice for all the Japanese food we would eat in 2016 (when we didn’t even know we’d be visiting Japan). 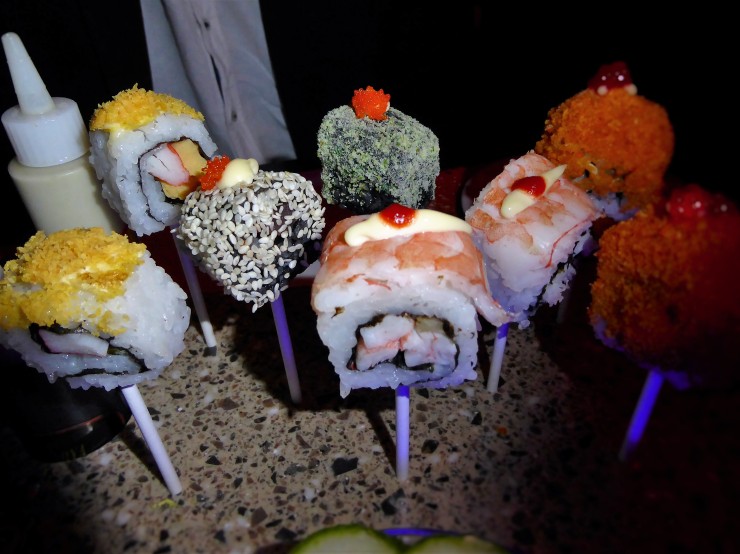 We pipetted potions into our plates. 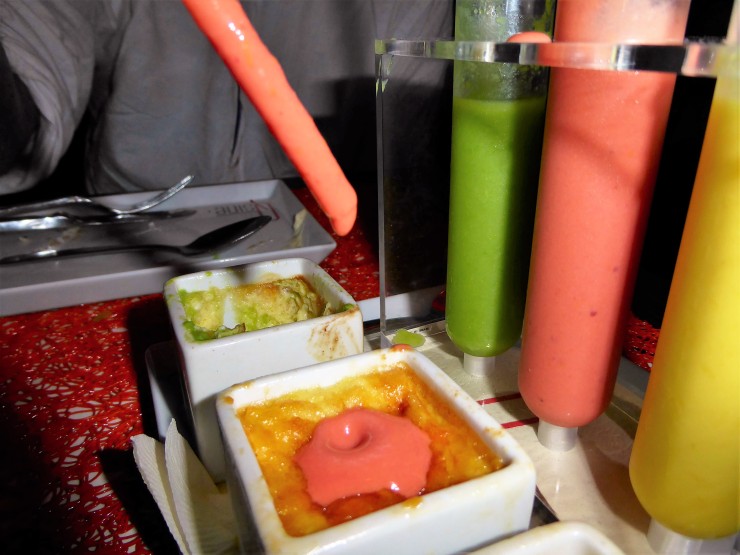 And went back to primitive infancy diets with pureed versions of classics.

We had to exercise some brain power with the Rubix cube of dessert choices.

The only thing that looked like it was lacking in my dessert was Tim Peake ready for blast off. 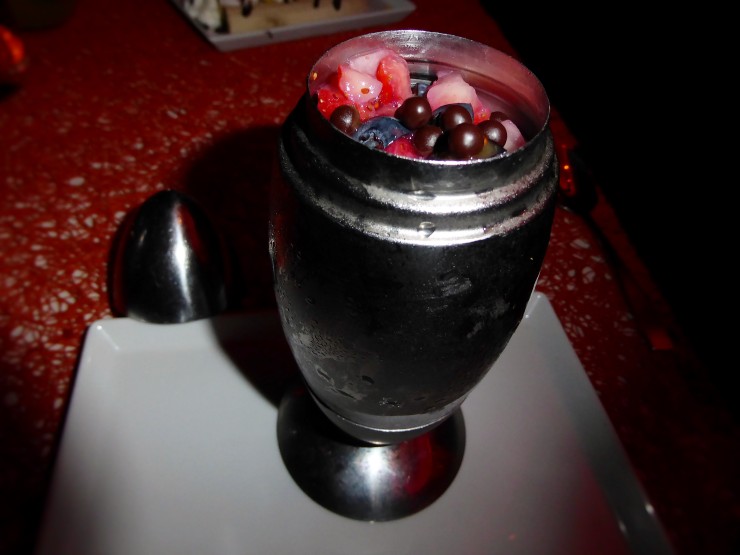 But Pumpkin brought us back to the 1980s with his surprise dessert lathered with whipped cream and colourful candy condiments. What is It about that fuzzy feeling of nostalgia conjured up re-acquainting with sweet treats from your childhood? 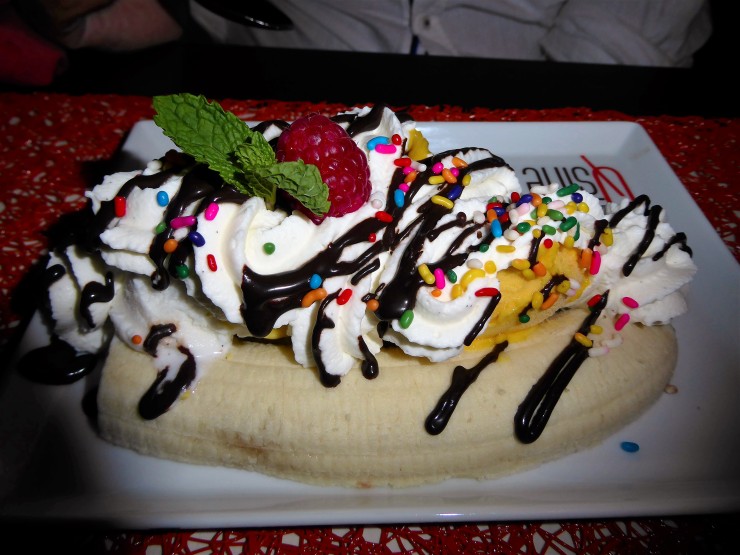 And when our stomachs were sufficiently lined, cocktails were beckoning, magicians assistants were awaiting their mysterious fate and a certain travel blogger was learning to Carpe Diem by shamelessly grabbing the mic with a great group of ladies to reach the Karaoke Idol finals (whilst our respective boys stared on in horror.) Let’s just say that this is one photo I am very glad is blurry!

Since issues like arranging cabs or finding our way back to the hotel at the end of the night are utterly redundant on a cruise, even Pumpkin (who craves early nights the way I crave chocolate) reconnected with the former party-animal within him with a pit stop at the Martini Bar and a stroll through the casino to try our hand at the roulette wheel. Holidays don’t fund themselves after all! 🙂 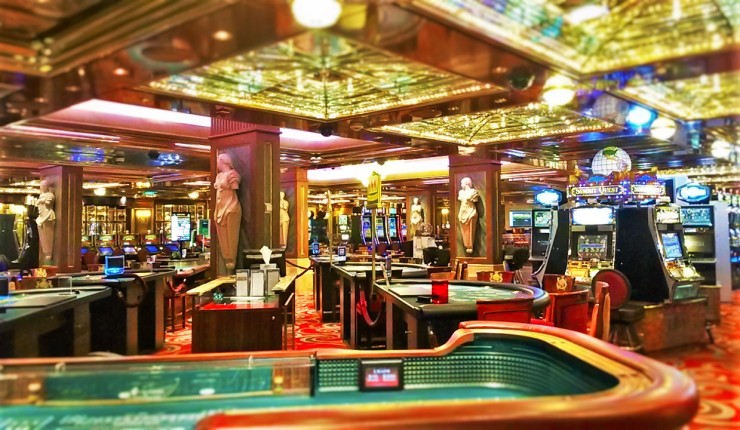 As I said in my previous post about cruises, as a couple, travelling without others, I think we prefer a slightly different style of travel but for a convenient, easy family holiday that allows for differing interest and abilities, I would certainly consider it again and am particularly drawn to the cruise voyages around Alaska and the Norwegian Fjords. If you have been on either of these, I would love to hear your thoughts.

Have you been on any cruises and what what are your tips for choosing a cruise liner or a specific ship?

If you want more info on our Caribbean Cruise itinerary, feel free to snoop around our snorkelling experience with sea turtles in Barbados, a tranquil, uncrowded paradise beach in Antigua or the quirkiest beach/runway in St Maarten where you’ll ever sunbathe (or plane spot!)

32 thoughts on “An Inside Tour of Celebrity Summit Cruise Ship”