Contrary to what popular blog press would have you believe, not all of us twenty or thirty something female bloggers ooze the self-confidence that is needed to routinely plaster our mug shots across the multitude of screens that increasingly exist in our daily lives. If you’ve chosen to immerse yourself in the world of travel blogging, you probably already veer towards the generous, big-boned end of the trigger-happy spectrum as far cameras are concerned; but it’s one thing feeling at ease whilst taking a photograph and quite another when you suddenly become the subject of one.

Let’s place this in a semi-autobiographical context by looking at my Instagram account for example. I’ve shared around 600 photos on this social media platform since I joined it a couple of years ago – only around six of them feature my face and absolutely none of them feature me with Pumpkin, despite the fact that nearly all my travels are with him.

I am sure many of you who travel with your significant other can relate to having hard drives full of photos that tell a story of “here’s me at…..” (insert landmark of your choice), swiftly followed by “here’s you at….” (insert same landmark).

If you want any photos together at said landmark, you are left with a collection of options as underwhelming as a sparse dessert menu you wish you’d never saved space for:

(1) Through a melange of mixed languages, ask the only random stranger who seems vaguely approachable but risk having your arm accidentally amputated in the photo and sigh five  minutes too late when you spot the missing peak of the Eiffel Tower.

(2) Deploy handheld selfie mode, which the world never intended for couples with a height discrepancy (and which yield such gigantic close-ups of your face that you will locate freckles on your nose that you hadn’t even realised existed).

(3) Successfully capture photograph without bothering any strangers (on 8th attempt after half an hour spent on auto-mode camera set up with tripod. Great way to make the most of the money invested in flights and hotels. NOT.)

(4) Then there’s the scenario I simply refuse to entertain, which goes a little something like this: “here’s us at landmark in what appears to be a decent photo.”

Sadly not, as just hours before you Snapchatted that pic, an innocent passer-by had his eyes lopped out after walking into your intrusive eyesore (pun acknowledged) of a selfie stick.

(Disclaimer – no actual eyes were lopped out in the making of this blog post.)

Where does that leave you then, if you’re travelling as a couple or a group of loved ones and want some decent photos on an island as photogenic as, let’s say Santorini – a destination we visited just last week and whose immaculate scenery frankly upstages even the most beautiful members of the celebrity glitterati that step on it?

In a day and age where you can check your emails on a watch and be caught out in your PJs at 2pm on a Sunday (thanks Skype), surely, SURELY there is a better way to get some half respectable photos as a couple or as a group of family/friends on holiday?

Pack away those selfie sticks and drones, whip out your passports and kiss goodbye to your holiday photo dilemmas because the new wave of holiday and vacation photography is the answer!. After being tempted by the idea for more than a year, I could hardly imagine a destination more breathtaking than Santorini to test out this exciting travel photography concept, enlisting the help of Localgrapher, who offer memorable travel photo shoots everywhere from Azerbaijan to Rio de Janeiro to help you immortalise those priceless experiences in some of the most dreamy locations on the planet. 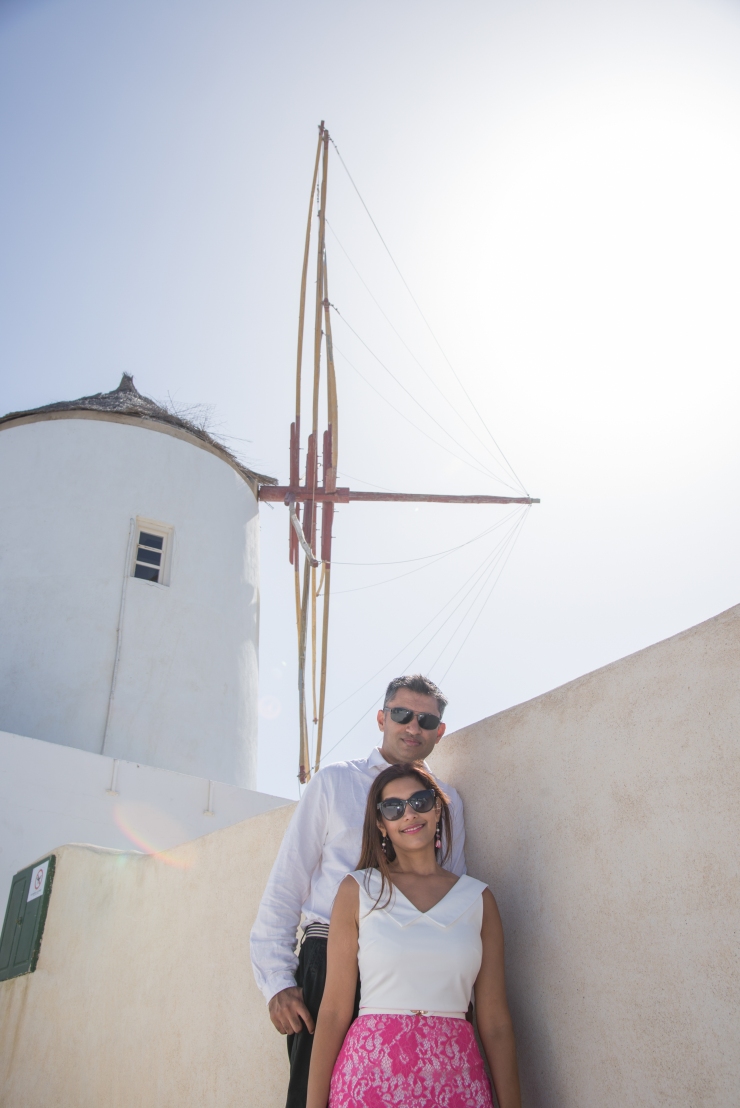 As a couple, we are usually so camera shy that even when our wedding photographer offered us an engagement shoot as part of the package we had already paid for, we politely declined. That said, everyone who knows us will verify that exploring the globe is our ultimate passion above all else and that was why, despite our shyness in front of the lens, we decided to part with our inhibitions and embrace our first photo shoot since the wedding day on this world-renowned, volcanic Greek island.

After browsing previous photo shoot images from Localgrapher in Santorini, we selected the bronze package with Ioannis, which would comprise 45 minutes with our photographer and 20 images available to view and download later in digital format via an online, password-protected gallery. After a couple of straightforward and prompt emails exchanged regarding dates, times and availability, our Santorini photo shoot was confirmed.

I was keen for the shoot to take place in Oia, cited by many as the most beautiful village in Santorini and one of the two areas we were planning to stay in but Localgrapher are quite happy to try and be flexible to accommodate your needs so if there’s something specific you have in mind, just mention it when you get in touch with them to see if it can be arranged.

Ioannis shoots at many of the more offbeat parts of Santorini as well such as the Red Beach and black beaches for those who may want a more peaceful route for their photo shoots.

Staying true to their names, Localgrapher photographers are, you guessed it, local, professional photographers!

Ioannis has been living and working as a photographer in Santorini for many years and thanks to his in-depth local knowledge, we were led to multiple viewpoints with sweeping panoramas across Oia and beyond that we hadn’t even realised existed from when we had strolled through the village ourselves so aside from being our photographer, he doubled up as a tour guide to the local area.

He found a spot to photograph us in front of the iconic blue domed churches that are such a quintessential hallmark of Santorini and most impressive of all, he helped us weave through the crowded streets packed full of tourists, all trying to out-do each other for the best vantage points in the village and elbowing each other’s DSLRs out of the way. 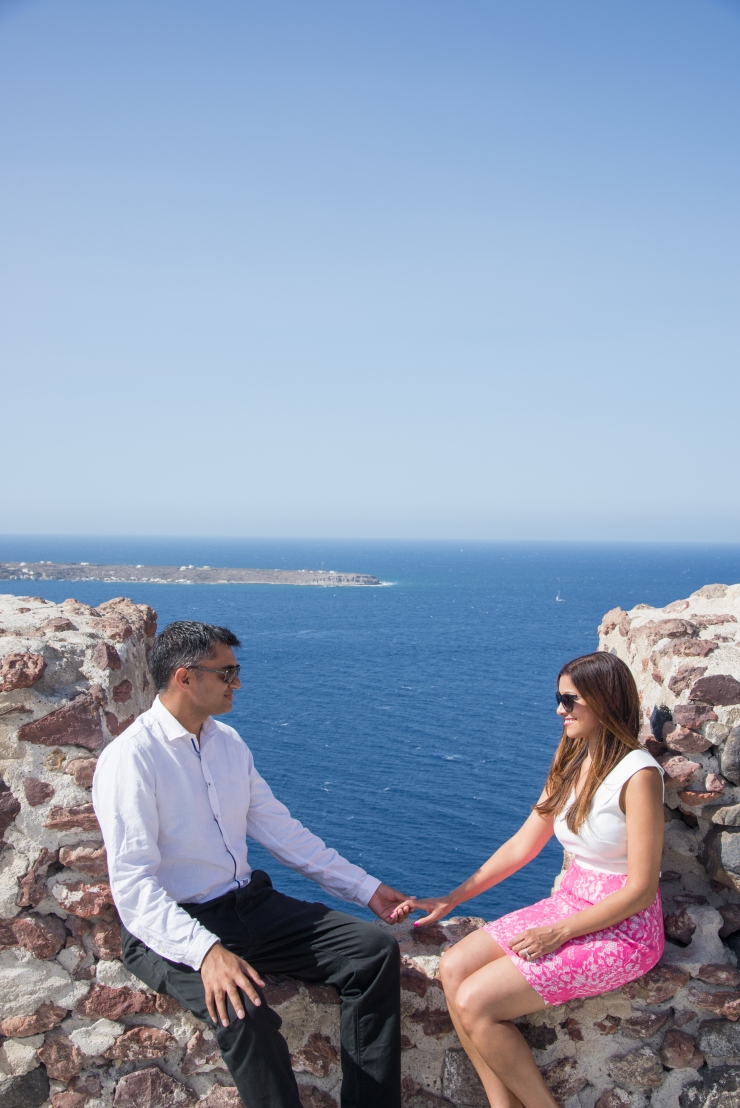 From looking at these photos, you might be lured into the belief that we were the only people on the streets at the time. It was midday on a sunny Saturday so that was definitely not the case but that’s one of the perks of having a professional photographer who knows the terrain, and knows how to work around the crowds.

What to wear during your Santorini photo shoot?

I did Google this for tips myself before we went but the answer really varies depending on the vibe you want to portray in your photographs. Some go for beachy, flowy, casual clothes, others for more glamorous, formal attire with waistcoats and evening gowns. 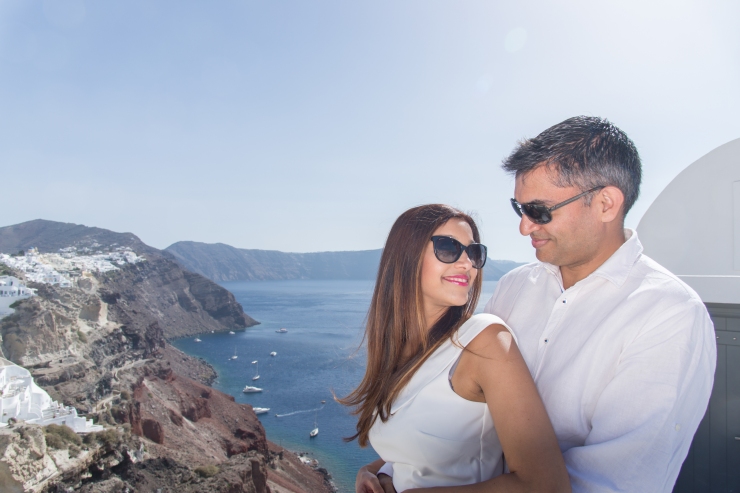 Remember, though, that Santorini is very hilly so avoid clothes or shoes that will have you falling flat on your face (ain’t nobody want their vacation photo shoot to come with a head injury.) Whichever style of attire you go for, it’s worth avoiding wearing colours that clash too much with other members of your party and popular choices tend to be either striking colours like pinks, reds and yellows to contrast with Santorini’s blues and whites or blues and whites themselves to complement the backdrop.

How we felt during the Photo Shoot

I won’t pretend that we weren’t nervous whilst we waited for Ioannis outside a church in Oia but after the first few shots, aided by his laid back and easy-going style, we soon fell into a rhythm and stopped feeling so self-conscious, also helped by the fact that we had to go incognito behind our sunglasses thanks to the piercing bright sunshine – God bless the Greek weather lords even in October!

As it turns out, we need not have been so apprehensive since the practice of vacation photography is so commonplace on this island that there are tens of other people, especially couples, also doing the same thing, many of whom seem to be doing bridal shoots in wedding outfits, even though they aren’t getting married?! Each to one’s own but it certainly helped deflect attention away from us! 😀 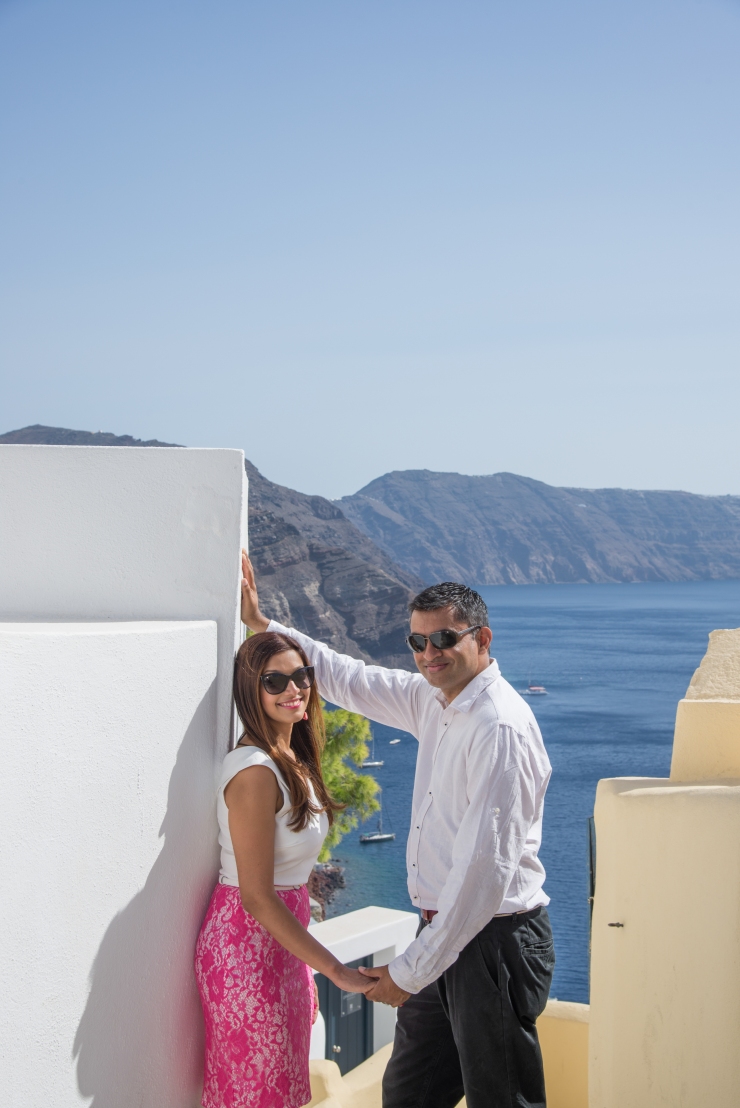 Localgrapher specify that they will get the images to you within 4 days of the shoot but ours took only two and there was no better way to beat the post holiday blues than by putting the kettle on, opening up my email and seeing the link to the images. I suspect I will be dreaming myself back to Santorini many times over the upcoming winter months with these uplifting, summery images .

For those truly special travel experiences – that once in a lifetime mesmerising destination you have finally made it to, that big birthday celebration abroad, that long-awaited family reunion holiday, maybe even that one where you’ll get down on one knee and ask the biggest question of your life – don’t let them all vanish into a selfie. I am a dreamer and a self-confessed hopeless romantic but those rare moments are priceless and I am so grateful these photographs have captured them and allowed us to relive them for years to come. Now to back them up somewhere!

Many thanks to Localgrapher for hosting us on such a fun shoot. All views are my own (though the photography most definitely is not – after all,  if I could take photos this lovely myself, I wouldn’t need the shoot!) Photo credit for all these images goes to our talented photographer, Ioannis.

52 thoughts on “A Romantic Santorini Photo Shoot with Localgrapher”