If I am not at home for Christmas, then there is only one place I would rather be and that, my festive friends, is New York City.

Actually, who am I kidding? The truth is that I could (and do) proclaim the same any time of year, regardless of whether spring daffodils pepper my garden or whether the sturdy heel of my oh-so-unglamorous-but-ultra-comfy black boots trample the auburn fall foliage beneath with crispy aplomb.

Many of you may already be familiar with that (my love for New York I mean, not my ugly boots), since I have attested to it before many a time on this blog; but I myself remain puzzled as to where I acquired such an innate affection for a city I have never lived in and have been to just three times (four if you count a trip as a toddler).

One can’t help but postulate whether in some former life, perhaps New York City was home, maybe it was the scene of an epic romance that I was privy to or perhaps the universe has plans to transport me there more permanently one day in this life… (wishful thinking but a girl can dream!)

When I eventually win that Euro Millions jackpot or when NYC hotels come even within sniffing range of the term “affordable”, then I will make it an annual ritual to hop on board that trans-Atlantic flight. (For a great little Manhattan boutique hotel, check out my review of Cassa Times Square)

Until then though, I cherish the sporadic visits I make every few years, each time arriving on the streets of Manhattan with the kind of fresh-faced, enchanted glint in my eyes that would convince you I had never travelled outside my own house, let alone to the bright lights of the Big Apple.

My previous visits to New York have always fallen in summer or autumn months and last year, just before we headed on board a Caribbean cruise in December, we took advantage of the timing to experience NYC at Christmas time. The Pogues & Kirsty McColl’s Fairytale in New York has long been  my favourite Christmas song (and not because it has New York in the title!) but I could never understand how a song that sounds so uplifting when it blares from the radio speakers could be filled with such grumpy undertones and words like “scumbag…maggot…cheap lousy…”

At Christmas time though, the fairy tale of New York becomes a most apparent reality. The already heavily illuminated city becomes over-charged with shimmering shop displays and towering Christmas trees; ice rinks with picture-perfect backdrops that we know and love from countless Hollywood movies open up, where couples glide along hand in hand and children lurking beneath bobbled-woolly hats cart ahead of the parents tentatively grabbing the rails.

Markets are brimming with jovial tradesman, who serve belly-warming snacks in quintessentially American-sized portions to keep visitors well-fuelled for the Arctic temperatures of a New York winter – or at least, that’s what normally happens but we lucked out by arriving during one of the warmest winter week’s in New York history!

There are thousands of attractions in NYC even for the repeat visitor and 3 adult trips to NYC later, I have barely scratched the neon surface but for today’s post, I wanted to show you the sights and locations where I felt most festive and where the spirit of Christmas in New York City came most alive. I must thank Carolann and Cass, for the helpful insider tips they gave me before I went.

The Bank of America Bryant Park Winter Village features a glistening white ice rink with free general admission, lined by an array of boutiques, independent shops and stalls, which will leave you with no excuses not to tick off your full Christmas gift list as well as no shortage of tempting eateries along the way. 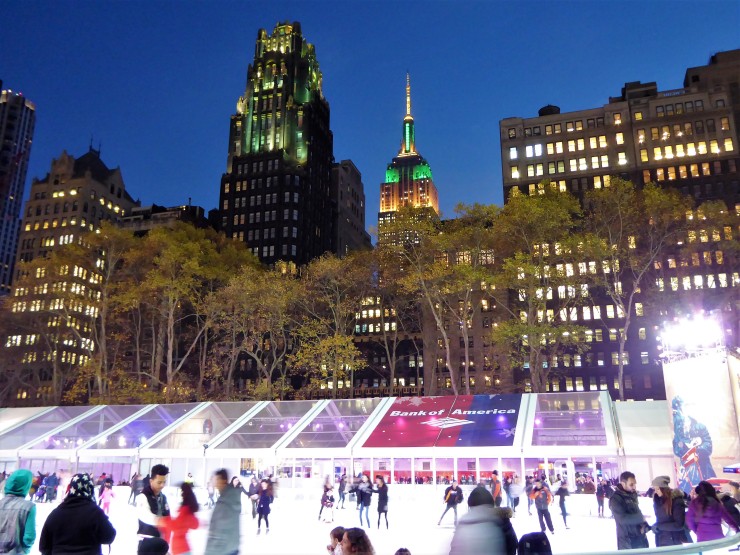 After developing a love of them at the San Telmo market in Argentina, we found ourselves tempted by the steaming-hot empanadas on more than one occasion and may have gotten a bit preoccupied with these when we should have been doing our Christmas shopping.

Visiting Macys is something of a rite of passage when visiting New York City for the first time but at Christmas time, the real magic of the department store lies on the outside rather than the interiors with the Macy’s Window Display, constructed with colourfully coordinated, thematic concepts that will be sure to have children (and adults like me!) gazing in awe.

When we went last year, the display was a tribute to Charlie Brown at Christmas, although I was peeled away from it hastily by Pumpkin, whose hunger had metamorphosed him into a Christmas character of his own (aka Scrooge), not helped by the fact that he spent nearly an hour watching me get side-tracked and sweet-talked at the Macy’s make up counters after I told him I’d “just be a minute.” 😀 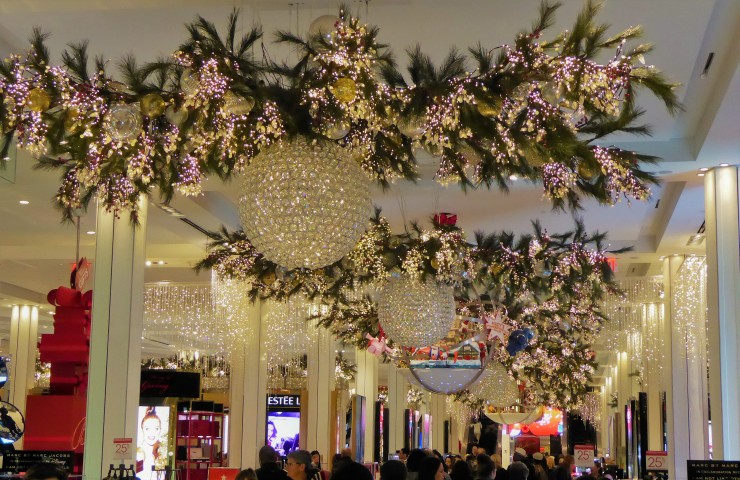 Remember, if you are heading inside for a spot of retail indulgence, make sure you stop at the Visitor’s centre with your passport in hand to take advantage of the visitor’s discount that applies to many items in store.

Yes yes, it’s another window display and I rarely talk about department stores and malls given that shopping is one of my least favourite pastimes but I am magpie for sparkly sights and just look at the radiance beaming from the walls of Saks Fifth Avenue. I didn’t even think to go inside the store as I was so busy photographing the spectacular visual feast ahead of me. 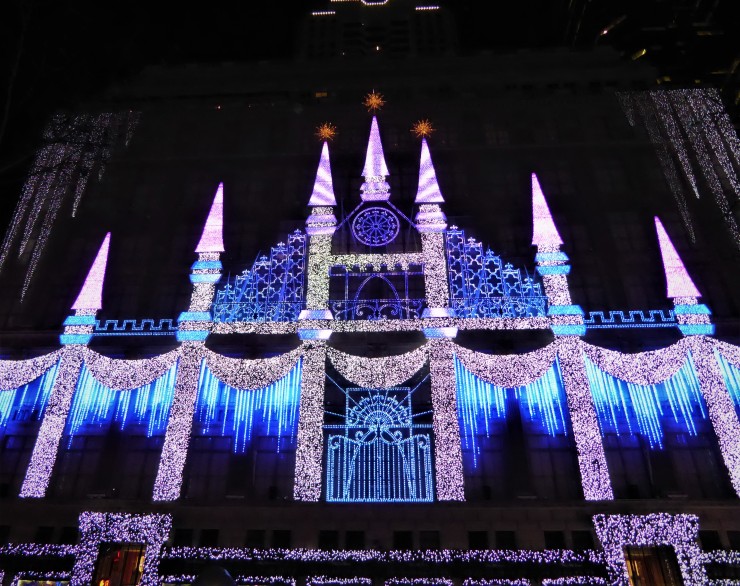 And whilst you’re on Fifth Avenue already, even if you’re only going in to admire the neo-Gothic architectural styles, the Christmas period is a great time to have a peek at St Patrick’s Cathedral or St Thomas’ Church. 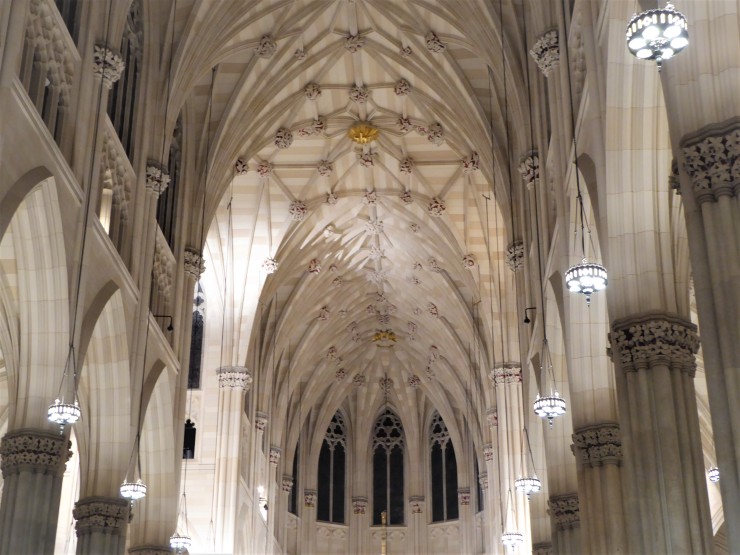 As its name gives away, this market is tucked away in Manhattan’s Chelsea neighbourhood, a world away from the madness and mayhem of Midtown and Times Square and often overlooked by tourists visiting New York City for the first time. On this trip, I finally made it to Chelsea Market. 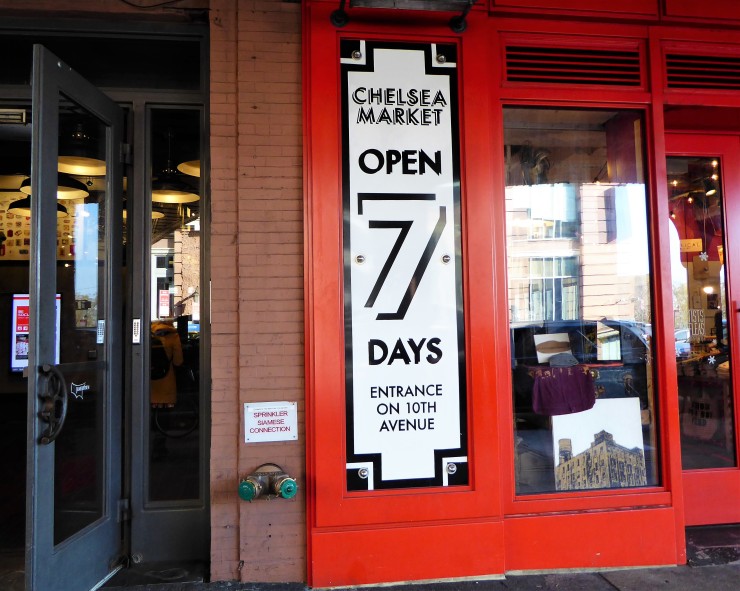 Whilst it may not seem like an obvious choice to include in a festive Christmas round-up of the city, our afternoon there turned out to be one of the most fun, feel-good, Christmasy days of the trip with its rustic and simple but effective decorations that filled me with nostalgic sentiments about making Christmas decorations in school and sticking them to walls and doorways. 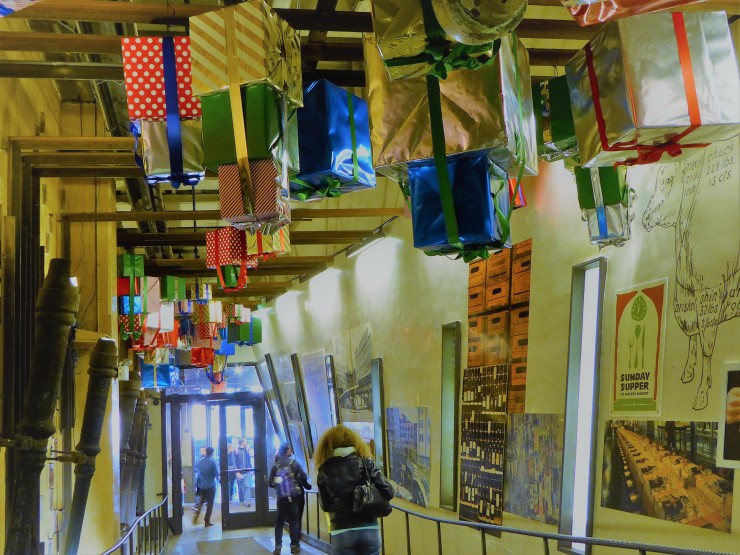 To make the most of this bustling urban food hall, COME HUNGRY. The choice is overwhelming and after a calculated process of repeated browsing, deliberating and discussion, we still only managed to narrow down our list of where to eat to about 20 different vendors.

Highlights for us included the Mokbar Korean chicken and the Los Tacos 1 fish and shrimp tacos though the lobster roll we saw was definitely one that got away. 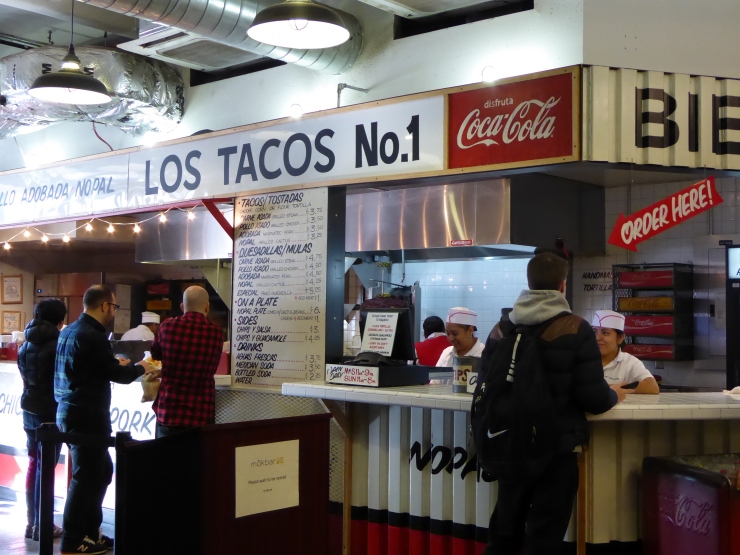 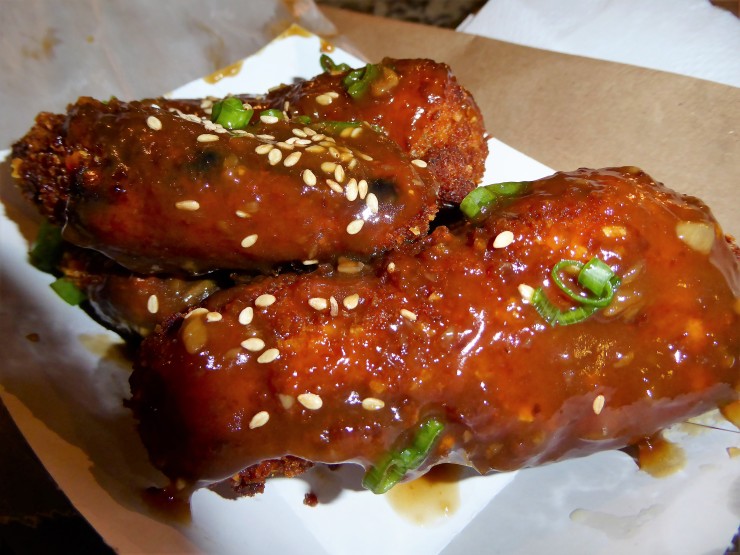 As for these gorgeous NYC themed iced biscuits, if any London-based Santas out there are wondering, I have been a very good girl this year and  if any New York themed biscuits were to come my way, I would devour them with gratitude and fervour. 😀 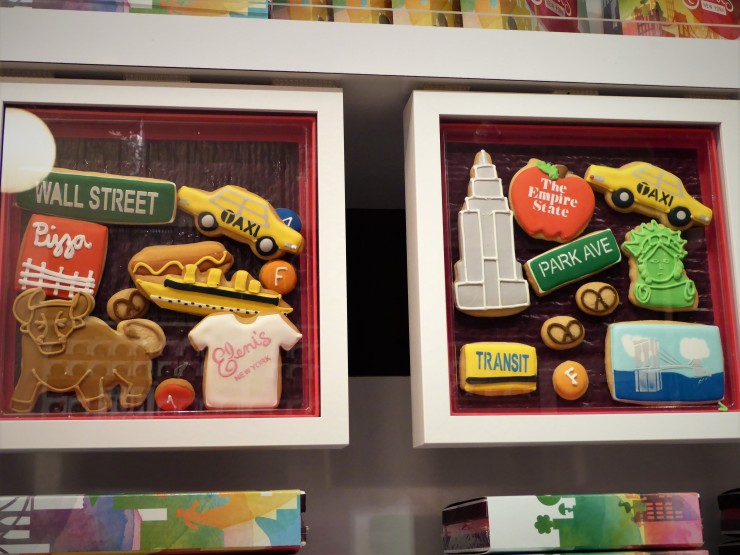 Except this time, we stumbled upon a Christmas Holiday Fair going on, where I peered with interest at the handmade jewellery candles, art works and ornaments and found several items that my family would have loved.

Unfortunately, I made that schoolboy (schoolgirl?) error of thinking I would come back to purchase them later without checking what time the stalls close and when I returned, they had all just shut up shop for the day.

They say the best things come to those who wait and in turn,  I wanted to save the best and most festive New York City location (in my opinion anyway) until last to reward those of you who so have so patiently read to the end of this post. Drum roll please….it has to be the world-famous Rockefeller Centre and Plaza with its iconic winter ice rink and its  gigantic, bejewelled Norway Spruce emanating beams of colourful, winter cheer from the lights and decorations that adorn it.

This is the scene you will have seen in postcards, magazines and movies time and again and although the crowds in the area were dense to the point where one human seemed indistinguishable from the adjacent one, nothing could deny the sheer seasonal joy brought by the sight of Rockefeller Plaza at Christmas.

I looked to one side, where my suspicions were confirmed. Pumpkin’s inner Scrooge had been left well and truly behind at the cosmetics counter in Macy’s;  when I squinted through the luminescent glare of the Rockefeller lights, I saw his eyes sparkle and his smile breaking out uncontrollably, every bit as widely as mine was, such was the allure of the festivities. And that, there, is the fairytale of New York at Christmas.

Have you ever been to NYC at Christmas time? Which cities in the world do you find most festive?

41 thoughts on “The Fairytale of New York at Christmas Time”