The Road to Gold

A half an hour boat transfer, one hour car transfer, one hour domestic flight (that was ninety minutes late), followed by a three-hour taxi ride at the other end – and finally, embraced by the glowing arms of the evening sun, we had arrived. Add to this the recent spate of severe gastroenteritis that had afflicted one of us (unsurprisingly not the one penning the tale with the fuzzy retrospective warmth) and the journey seemed even more arduous.

Pumpkin has survived Delhi belly many a time but 2016’s Burma belly saw him at his most vulnerable, yet still he powered through our day-long marathon without even a hint of complaint or self-pity.

We had traversed the country to see the Golden Rock – but it struck me that mine had been next to me the entire time. 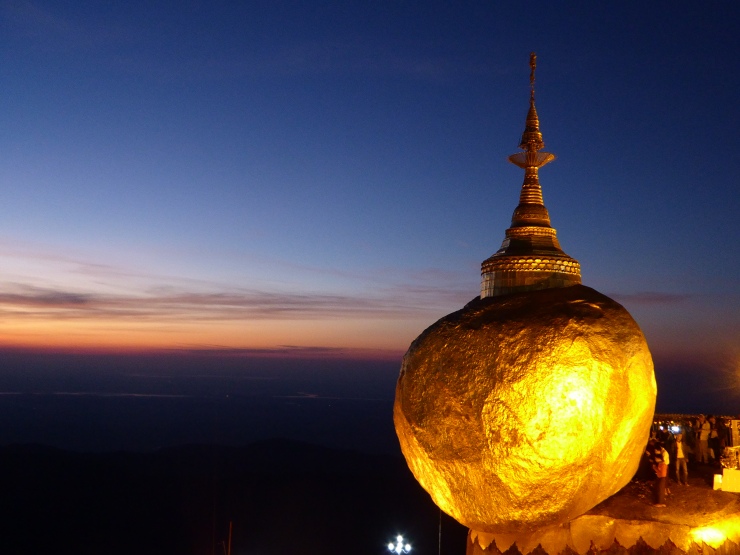 A mere five weeks earlier, we huddled together under our mauve blanket at home, armed with laptops, questioning whether it was worth changing the whole itinerary to accommodate Myanmar’s Golden Rock Temple into our plans  and if you read about my weirdest travel moments from 2016, you will know that we ultimately decided it was.

The visuals had swayed us but as we took our seats for the final leg of the hair-raising, stomach-turning, bumpy truck ride, sandwiched between rows of staring locals, the same questions arose and we honestly wondered what on earth we had been thinking. 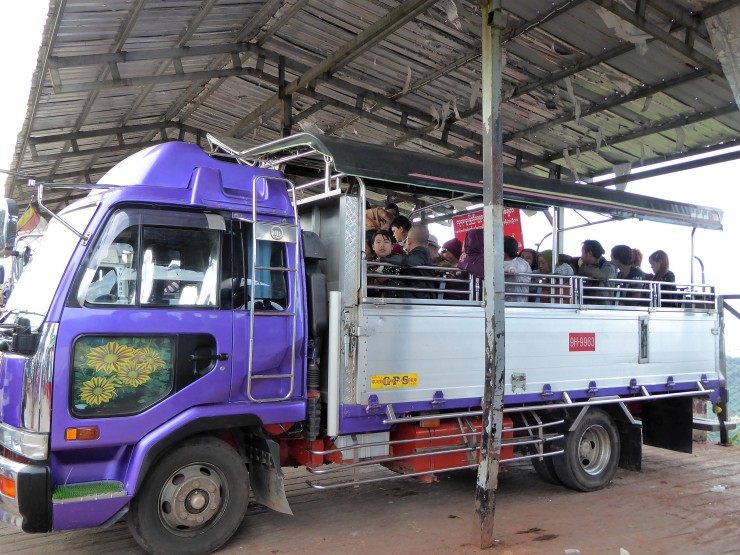 My guide lent me a hand, as I clambered out of the truck with the elegance of a drunken reveller awaiting a 4am night bus. I lacked the grace of the local women of Myanmar, who stepped off the truck draped in delicately embroidered longyi, their hair pinned back in a flawless round, lacking any of the humidity-induced frizz mine had been victim to. As we lugged our rucksacks in the direction of the hotel, the rotund edge of the Golden Rock crept into view, a jewel in the coral mist that had started to engulf the sky at sunset.

Its stature may be smaller than the photographs would have you believe, measuring in at just over 7 metres in height but this takes nothing away from the surreal sensation of watching a 2000+ year old boulder dangle menacingly from the edge of a hilltop.

We had reached the holy Golden Rock just in time for sunset. Photographers repeatedly boast of golden hour imagery but at the Golden Rock Temple, even their  nomenclature took on a meaning of its own.

For Buddhists in Myanmar and beyond, the pagoda here bears immense importance, since legend has it that the temple overlies a strand of Buddha’s hair. A surge of adrenaline masked our myalgia, as we joined the hundreds of Myanmari worshippers who had gathered here, their spines bearing the collective weight of not only their children but also their overnight baggage. 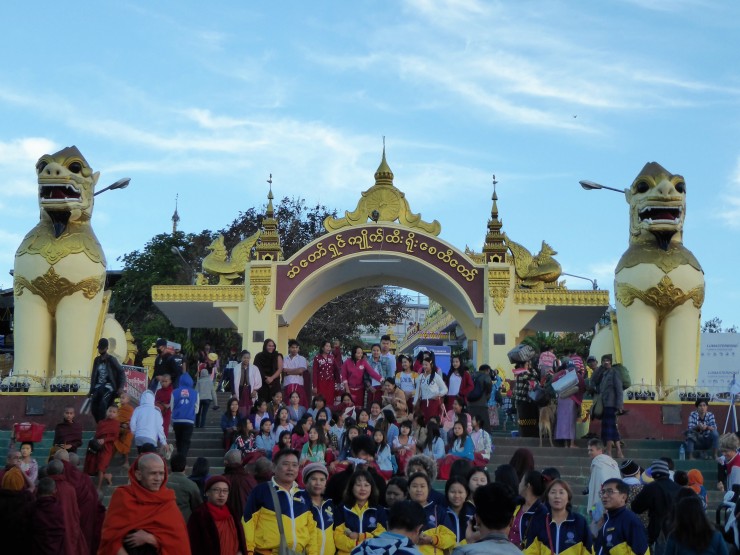 This was no special festival – the visual would have remained the same whether we had arrived a day earlier or a month later, for the Golden Rock Temple, also known as Kyaiktiyo Pagoda, is considered one of the three most important pilgrimage sites in Myanmar, drawing in crowds from far and wide, who think nothing of traversing the country on this spiritual voyage.

In the society I live in, even to take a child on an overnight trip locally, it is quite customary to see parents packing car seats, high chairs, several bags of supplies, bottles, nappies, buggies, rain covers, sun cream, plastic packets of food, all deemed essential for any well-kitted out Mummy bag.

And yet, on this cumbersome journey, which some families had commenced on the polar end of Myanmar, doting parents had arrived with barely a backpack each, somehow equipped with all they needed for their three to four children for an overnight adventure.

Babies smiled with a sparkle in their eyes, the plump rosiness in their cheeks completely indistinguishable to their baby brethren here in London, who have grown up immersed in a world of gadgets and contraptions. Toddlers ran around the broad-girth tree trunks that their fathers had hallmarked as home for the night.

Our belongings were safely locked within the confines of our clean and comfortable room at the aptly named Mountain Top Hotel. Just a few hundred yards away from the pagoda, the 4 star hotel, whilst not drowning in unnecessary luxuries, was more than sufficient for our needs with an enviable proximity to the main attraction, welcoming staff and cosy beds in which we would soon fall into a deep slumber.

Whist we nipped back to line our tummies with hearty Burmese cuisine, the locals who had arrived on pilgrimage were competing for spaces near the temple itself, some under swaying tree branches. Some were simply content with catching winks amongst the candle-strewn territory of the worshippers. 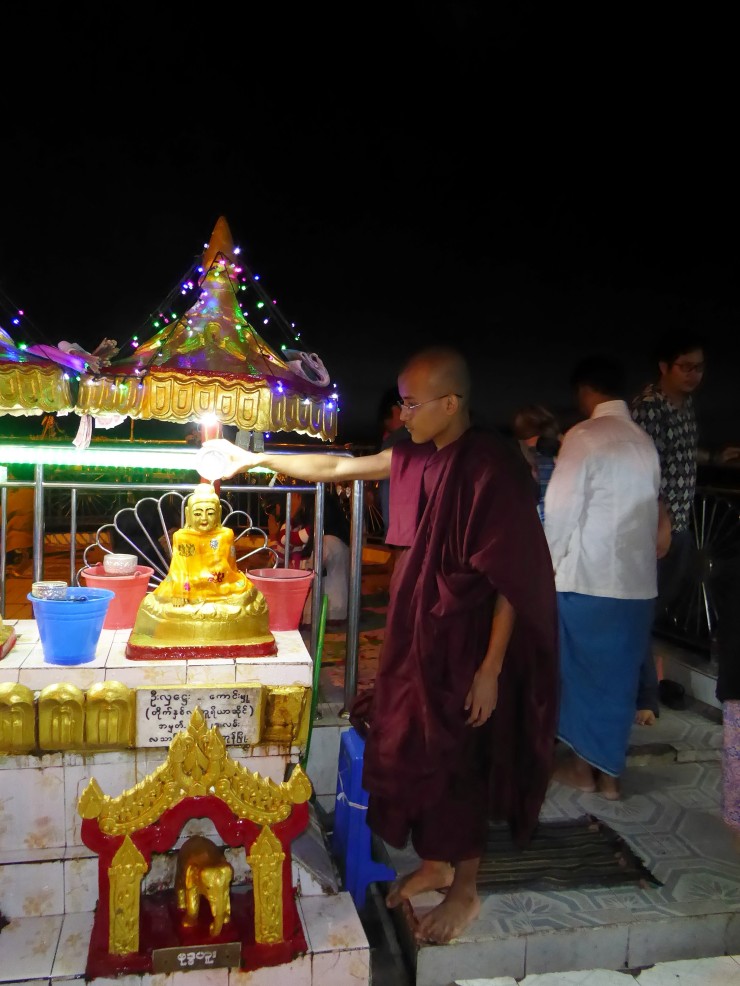 All seemed to share the unanimous glint in their eyes, the jubilant sense of elation of a dream fulfilled, an adventure about to unfold. It was a joy to witness such communal spirit and be privy to their united sense of purpose on this balmy and buzzing evening. 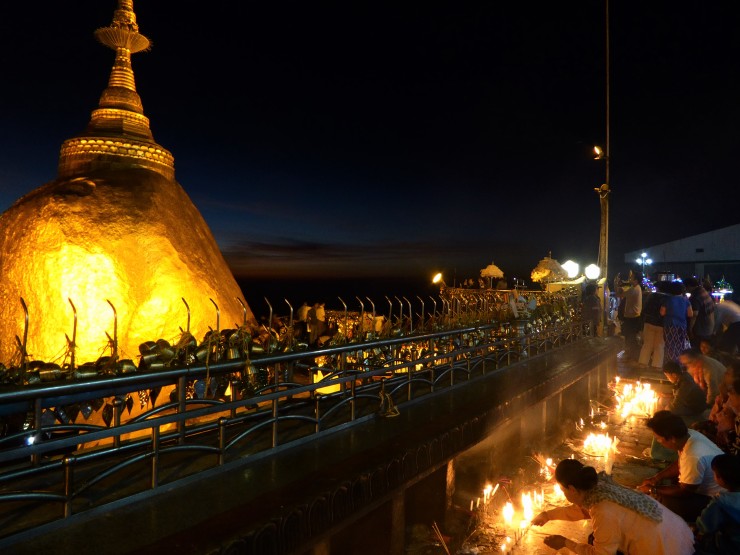 Their dedication was humbling but on a personal level, for me, the defining moment of catharsis during this trip arose when I stood back in silent observation; I watched the men and women alike bow down, almost in tandem to the low-level hypnotic hum of prayer. Delicate flames caressed the black skies above us, the streams of candles made electricity seem redundant, the Golden Pagoda – a gleaming beacon throughout.

Pumpkin followed in the shadow of the male worshippers, who stepped across a small  bridge and laid down thin slivers of gold leaf upon the sacred rock, a perk of their gender as I waited back with the other women behind the outer balcony beyond which we were not permitted entry.

Cohorts of ruby-red-robed monks ambled purposefully through the hubbub of the streets, some of preschool age and some showing their life experience and wisdom in the streaky grey bristles of their beards. They gathered donations with the clanking of semi-filled buckets and the ringing of bells, their profound sense of spirituality as apparent in their gait as it was in their gaze.

Every so often, however, a monk with a selfie stick would appear, reminding us that behind the raw, stripped back harmony here, like so many other aspects of modern life, even religious pilgrimages are evolving to accommodate modern world practices.

In every destination you visit, there is always more you wish you could have seen, more days you needed for discovery & exploration but after this experience in Myanmar, I felt felt no FOMO and no greed.

To have seen the Golden Rock that very first moment in the distance, to have smelled the molten candle wax mixed with the floral scents from holy offerings was enough.  To have heard our guide thank us, yes us, for enabling him to come on such journeys in the name of his occupation was hugely humbling and counter-intuitive in one, given that the only ones who owed thanks were us. 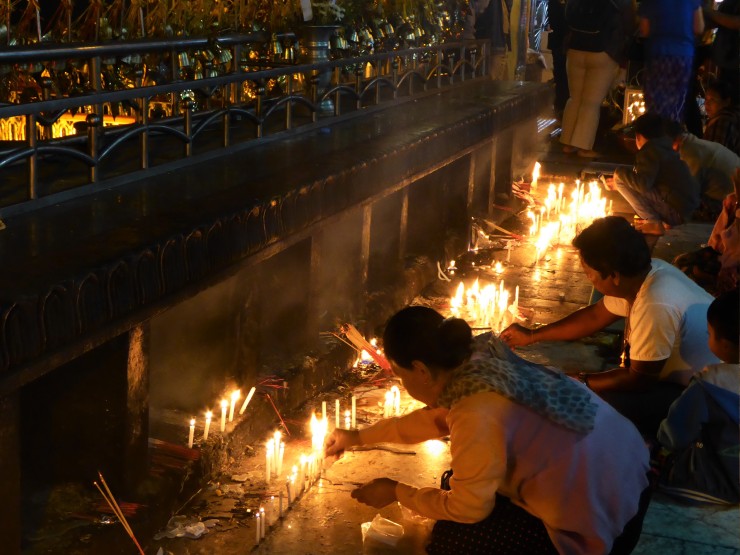 With such proximity to the pagoda, we set our 6am alarms for the next morning and shunned the mirror when they sounded, painfully aware of what it would reflect back. Instead, we slipped our arms through warm sleeves and returned at dawn to see it in a newer, bluer light.

The road to gold in Myanmar may be one you only travel once but when you reach it, one view is never enough.