I remember when one of my colleagues caught wind of the fact that I write a blog in my spare time a couple of years ago. She asked what it was about and it came as no surprise to her, like all the others in the room at the time, when I declared my niche (or broad niche shall we say) to be travel. She went on to ask how frequently I blog and back then, unmarred by the cynicism or lethargy of a more seasoned blogger, I was fairly punctual with churning out posts once weekly, at one time even stepping up to twice weekly through means I can no longer recall (or believe) but the proof was in the WordPress and twice weekly, it was.

“Do you have enough to write about though if you’re writing that often,” she asked sincerely? I nodded affirmatively with a brief throwaway comment about how many article ideas may be conceived of one destination or holiday, swiftly averting the conversation back to the shop floor, forever uncomfortable with having too much attention drawn to myself. 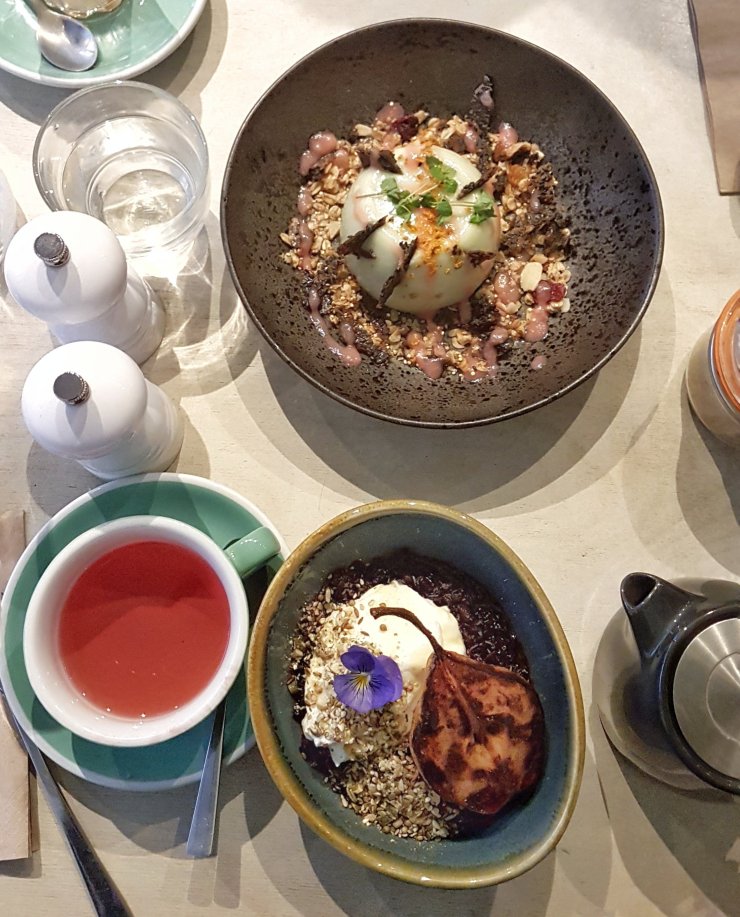 The truth was, the truth is in fact, that my problem was quite the contrary – a stealth of ideas paragraphs, adjectives and photographs, chapters full of stories wanting to be told, waiting to be told, eventually losing hope of being told and an author, who despite her passion to write, never could quite keep up with her own heart. Speed was never my thing. Not in the 800m track run at high school and not in the blogging diaries either. It seems highly undisciplined, therefore, if not a little unhinged, to be throwing in content that falls outside of my boundaries when I am only, y’know, four years behind on the travel posts I so badly want to deliver.

Brunching at Iris and June, Victoria

And yet, when an unassuming friendly London café draws you into its brunch matrix, inches away from the apartment you once called home, welcomes you without a booking or a queue, seats you even when your company is yet to arrive and offers you the only two ingredients you have ever wanted in the world in one simple sweep of the menu (matcha and coconut,) well then surely you can break your own rules for five minutes to show it some love? 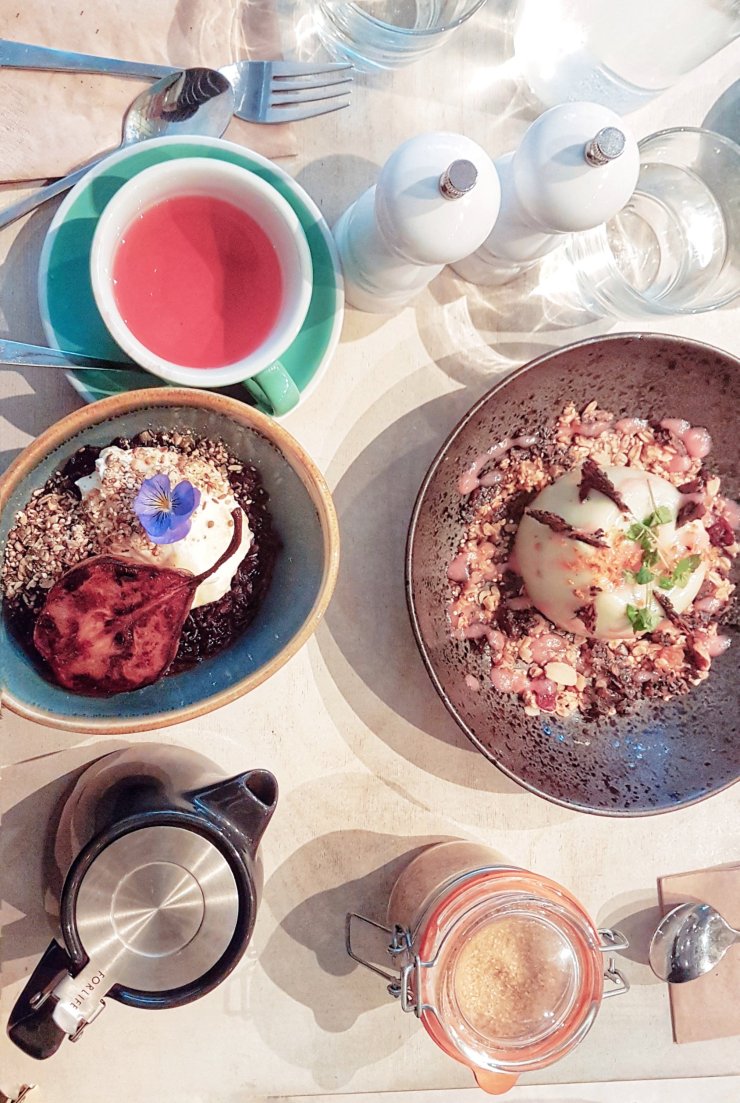 When I lived around Victoria, Nandos and Pizza Express were about as thrilling as it got and if you wanted anything more than a yoghurt pot or a greasy fry up for your Sunday morning feed, you were looking at a ten minute bus ride or a half hour amble. Annoyingly for me but a gain for those of you who have displaced me in that time, since my departure from the area, the culinary offerings have ballooned into an array of diverse temptation including Poke Bowls & Scandinavian bakeries and finally, only minutes away from the tourist-laden Victoria station, a charming artisan eatery that knows how to shake up brunch like a stuffed snow globe.

I love a good brunch. Like many women of my generation, I grew up watching Sex and the City and was lured into the belief that the combination of brunches with girlfriends and habitual cupcake consumption was a legitimate life path (if only!) but I have found that even in the foodie Mecca that is London, the same old tired offerings keep appearing in every brunch establishment on every corner. I know sausages and eggs are popular but we all know that the full English, the porridge, the pancakes (always with the berries or bacon) and the ever-popular smashed Avo on toast are going to feature – why do we bother even opening the menu? A little mix up never did the foodie scene any harm and there are plenty of classic menus still going strong for those who prefer the “if it ain’t broken” stance to breakfast. 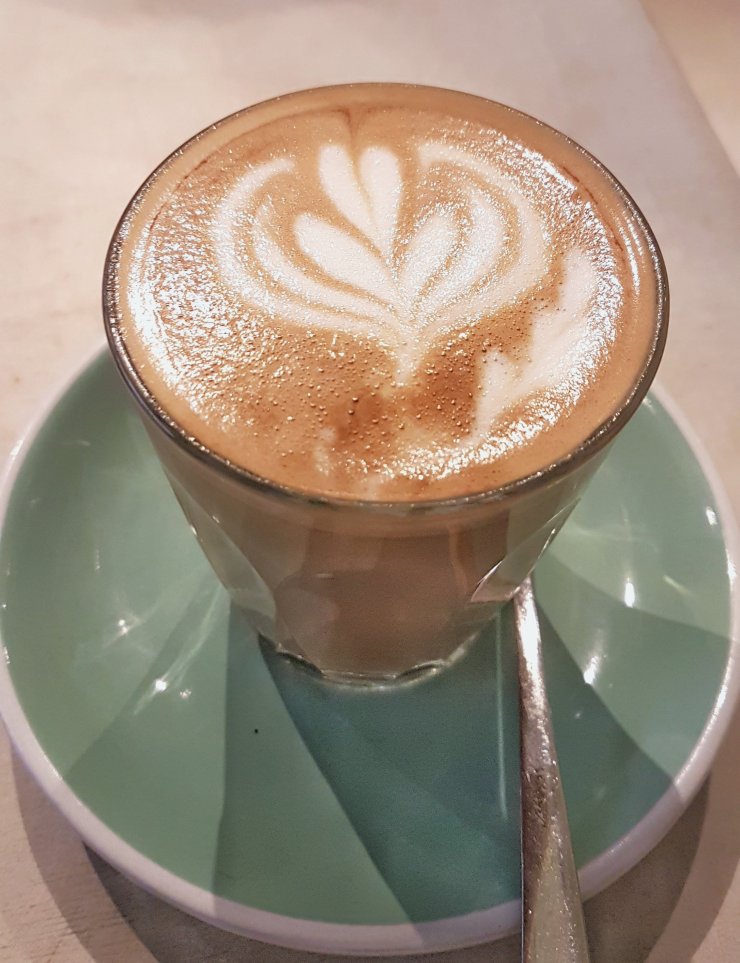 For me, however, it was delightful to rock up to an establishment that offers Ricotta hotcakes in place of bog-standard pancake stacks. It piqued my curiosity to see a rosti made with not just any old potato but a sweet potato (as if they know this counts as one of your five a day and is a whole lot more eye-catching with its fake-tan hues.)

They say that you should listen to your parents and Iris and June drew in my Mama with a magnetic pull when she spotted the good old avocado being offered with lentils and grilled paneer. You can take the Mother out of India but…

I wasn’t present that time that Mum bit into their fusion Asian twist on avocado and eggs but rumour has it, she commended the flavour and cooking of the paneer. (If you guys have ever tasted my Mum’s paneer, you will understand that is a compliment and then some.) 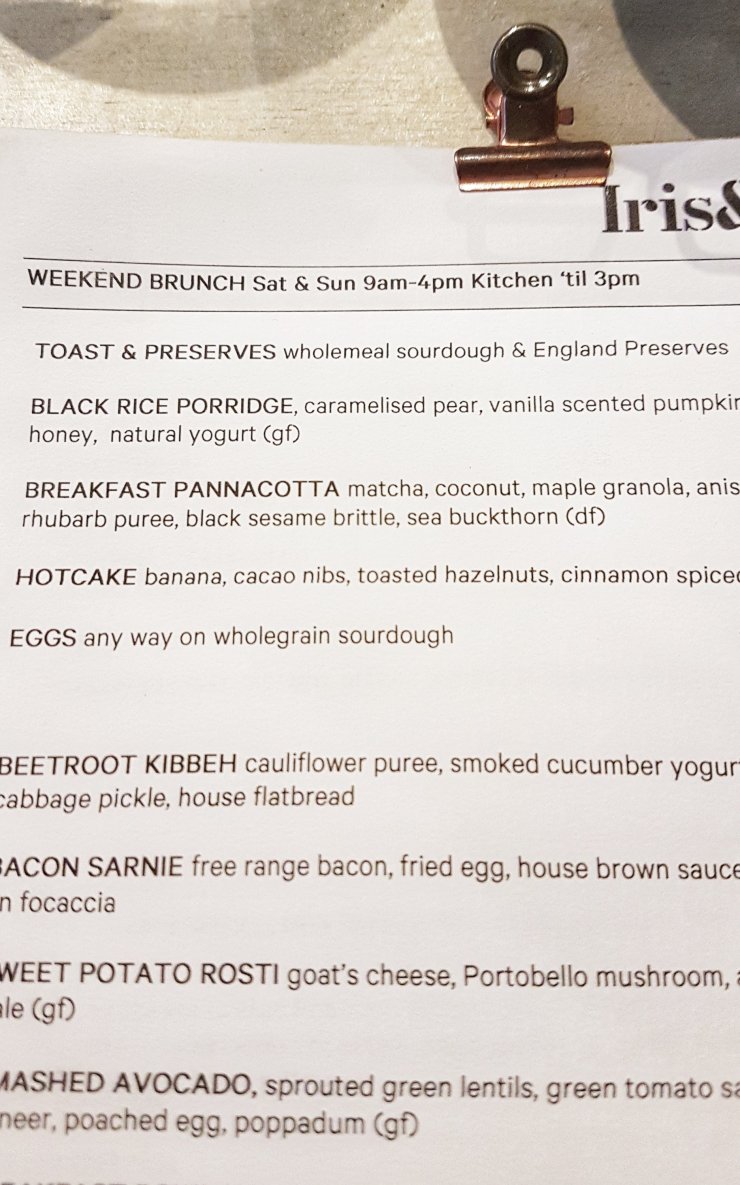 Pumpkin wasn’t joining me on this breakfast escapade but he kept himself amused the night before by playing his usual “guess what the wifey will order” game and despite the fact that I like to think my palate is quite open to different styles, he has this annoying habit of always being spot on.

That day, though, the look of confusion on his face was apparent. The wrinkles on his forehead drew closer together as he scanned the menu, his eyes rising and falling along the web page, eventually declaring that “there are 3 or 4 on here I could easily see you eating but you’ll probably end up going for the matcha panna cotta.” 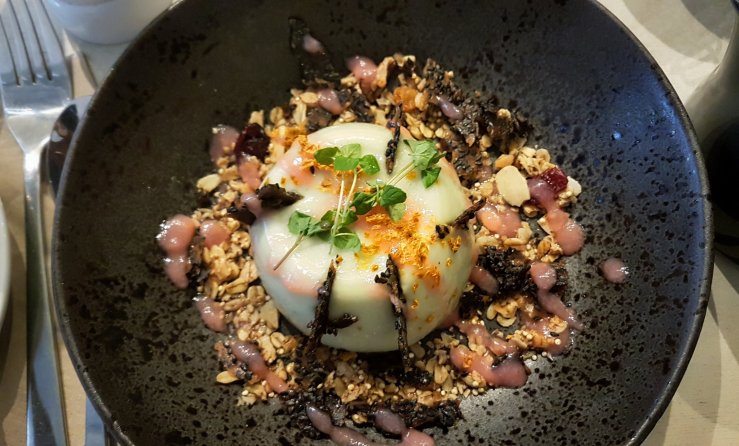 I almost resisted, simply in principle to prove I wasn’t the predictable matchaholic he know I have been for years (long before matcha became so en vogue – I like to think I was part of the original cohort and I think the matcha walking tour I went on and all the matcha foodie treats I tried in Japan) go some way towards proving my loyalty. In the end, I was faced with a choice between principles and matcha – I chose matcha.

Matcha coconut breakfast panna cotta sounds like dessert. You know that, I know that and judge all you want but I had no real issue with that. As it turns out, however, there would be surprises every step of the way because a wobbling, bobbling panna cotta it was but it was strangely delicate with just subtle hints of matcha blended through with the tropical creaminess of the coconut and not an ounce of over-sugaring that could have quite feasibly turned the dish into a meal-ending pudding pleaser. 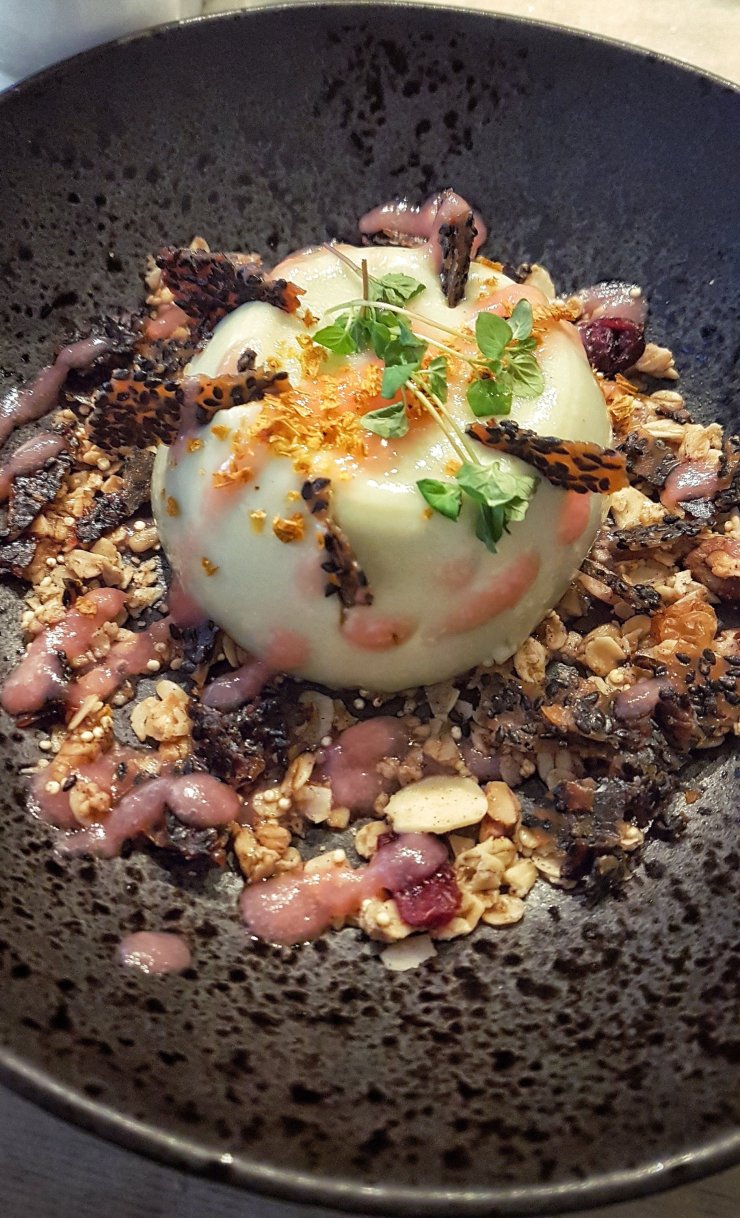 With maple granola strewn around the side and flecks of black sesame brittle and sea buckthorn lending a much-needed crunch to the melt-in-the-mouth panna cotta, each spoon felt like some kind of reward. The tartness of the rhubarb lifted the dish further and woke us up on a snoozy Sunday morning but if I’m honest, I could have done with a hint of extra sweetness to the dish. Then again, it is well established that my sweet-tooth soars above the national average so in truth, I was grateful that Iris and June kept it a light fragrant way to start the day.

A similar innovative, intriguing option that went light on the sugar front was the other dish on our table for the morning – a black rice porridge with vanilla scented pumpkin seeds and a caramelised pear – no oats or banana slices in this bowl, since Iris and June have reinvented the run-of-the-mill porridge bowl. The flavours are quite distinct and I suspect you need quite an experimental appetite to be able to enjoy it but I was glad that we dived straight into the whimsy in ordering the two most eccentric breakfast plates on the menu washed down with a rosy hibiscus tea that has the blush of a newlywed or a motif-adorned coffee for those who prioritize illustration over colour. 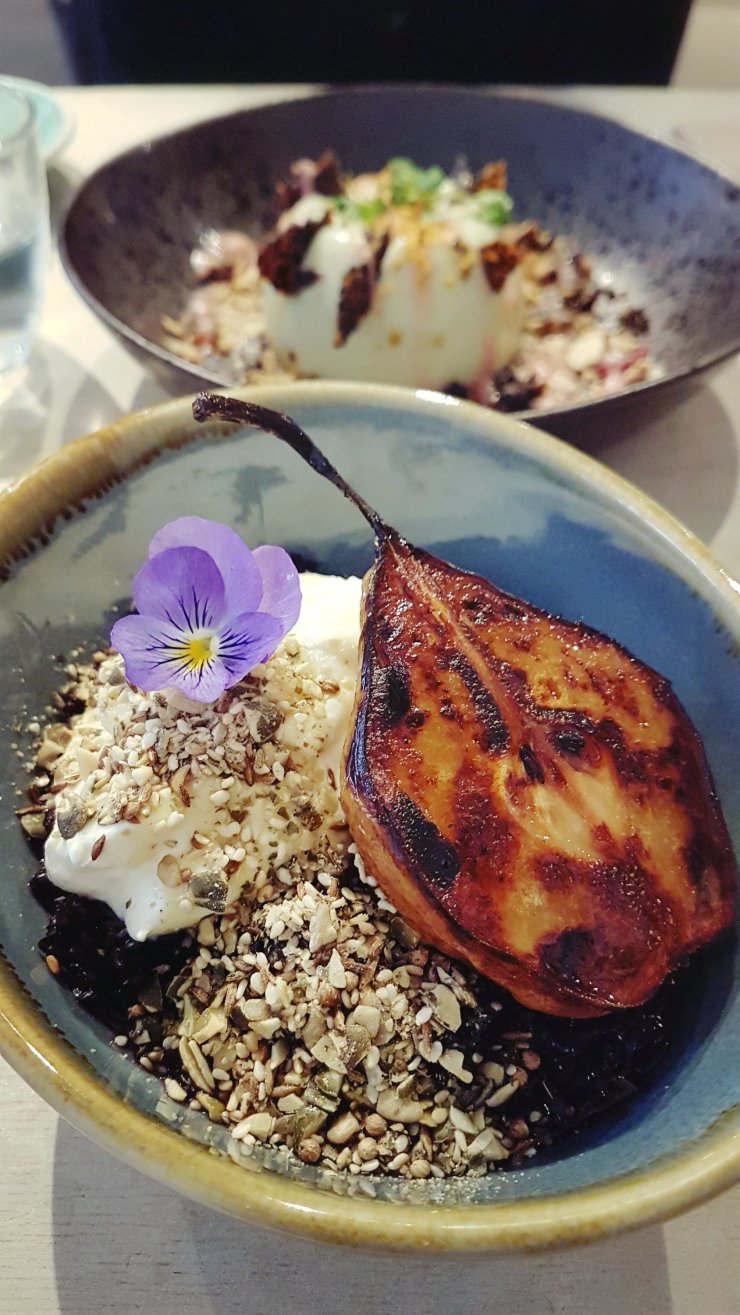 Next time, though, and I can assure you that there will be a next time at this place, I will revisit the ricotta hot cake that I dug into during my first visit to Iris and June, back then in the a day bathed with sunshine when the fluffy round of goodness was filled with poached peach and rhubarb, now replaced with banana, cacao nibs and hazelnut in keeping with the new winter menu.

I might not live around the corner anymore, which is probably just as well since I could see myself never turning the hob on in my own kitchen if I did but my frequent visits to Victoria and central London in general are all the more curious with this little addition to the weekend brunch scene.

6 thoughts on “Weekend Brunch at Iris and June, Victoria”