I’m having my moment, standing on my Park Avenue balcony, staring out at another Manhattan skyscraper. The eyes become striated with skyscrapers after 72 hours in New York City. It’s a distortion of vision I cling onto while I can. My grey faux fur boots, flush with the tones of the sky above, invade the soggy ground beneath me, as I walk the short length of my crescent-moon like viewpoint. It poured heavily the previous night as I slept, the soundtrack to my night an oddly familiar melange of assertive rain drops and city sirens.

And yet, I feel right in my element standing on my outdoor pretty pocket at Hotel Giraffe – despite the clouds, despite the crowds. It isn’t really mine, that much I know, but for two days, I can embrace that life – and I do. The question today is, will you?

Finding the right fit of accommodation in New York City is, I guess, in some ways similar to finding the right restaurant. They can be hit and miss or you can strike gold and after Hotel Giraffe invited me to experience a stay with them, I went on a mission to find out which kind of traveller this Park Avenue boutique property will appeal to. So, are you ready to see if you fall into any of these camps? Let’s go!

Those who have issues with confined spaces, tight squeezes and general shoebox vibes can breathe a sigh of relief. The rooms here are flooded with, well…room. Your suitcase can be as diva-esque as it desires because frankly, it’s got all the options for where it wants to hang out on any given night and you can yoga pose to your heart’s content. Just don’t go asking me to meditate. I don’t come to New York City to meditate. I come to New York City to eat, sleep and breathe New York City. And then we have those over-packers, a tribe of their own, habitually sporting their mammoth, pregnant-looking luggage and carrying more cases than they have days at their chosen destination. For the over packers, the rooms are equipped not only with lots of precious city space but also with the added bonus (or curse!) of weighing scales. On the one hand, one might not be up for the real time log of their doughnut and bagel consumption but on the other hand, thanks to the weighing scales, I knew I still had 4kg worth of merchandise still to purchase and unlike those who hit Fifth Avenue for designer shoes, Little Miss Sweet Tooth over here found herself stocking up on locally made artisan chocolate from Brooklyn…

I’m nothing if not predictable. 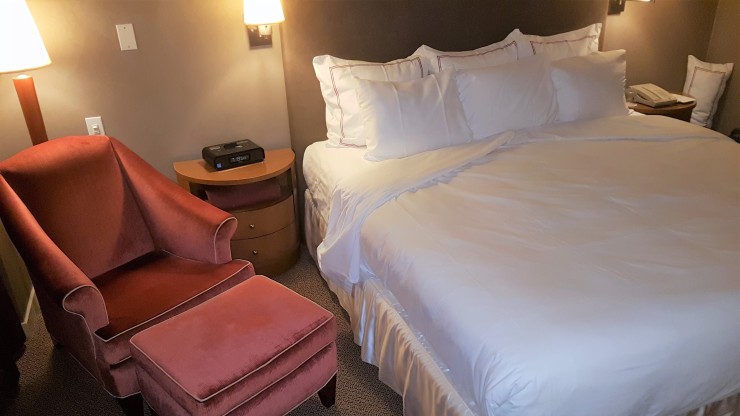 When I went to Vienna, it was all about the 4 pm coffee and cake ritual but over at the Library Hotel Collection properties in NYC, it is all about the 5pm cheese and wine reception, where reds & whites flow freely alongside bottles of bubbles. Alcohol, of course, is rarely a good idea on an empty stomach and so, to address all your gastric liming needs, along come the platters of Cheddar and slivers of Brie. Throw in some crudites, olives and grapes to try and build on your progressively tragic 5 a day attempts, whilst allowing the live grand pianist to wash out all the urban noise you gathered from your day out of exploring.

On my usual trips, the 5-7pm slot tends to be a window of laziness – that time of day, when we head back to the hotel and get dressed for dinner, where our activities have all but wrapped up for the day and we’re trying to relocate our second wave of energy for the evening ahead with a cheeky afternoon nap. Not here though; here in New York City, it was all about the cheesy recuperation.

If Park Avenue sounds familiar but you can’t put your finger on why, the chances are you’ve been watching US sitcoms or movies, in which the rich and famous inhabit this area. But while Charlotte York of Sex and the City may have made her home here, I’m at no risk of owning my own Park Avenue spot anytime soon and with that reality check firmly in place, I grabbed my moment of Park Avenue glory, while it lasted, fairly set in the knowledge that its property value must rank right up their with its Park Lane sister over in London.

Breakfat was included durnig our stay and just like we experienced at sister property, Casablanca Hotel, it was a continental affair with an array of breads and pastries, fruit, classic American cereal choices, toasted bagels and hot oatmeal (that’s hot porridge in British speak.) As tasty as that was, though, what really caught my eye was the additional surprise menu I found lurking in our room…

As it happens, the New York brunch institution that is Sarabeth’s happens to be almost immediately adjacent to the Hotel Giraffe so you can forget all about reservations and long lines to get in, guests can have pancakes in their PJs or any with the breadth of Sarabeth’s brunch offerings available for order to Hotel Giraffe rooms (at an additional cost to the regular breakfast.) Regrettably, I missed out this time and felt the NYC brunch FOMO because we had already made lunch plans on both days I was there and with US portion sizes being a touch bigger than British ones (!) two brunches was most definitely not an option!

Somewhere along the way, I became a lobby lounger. I am increasingly finding myself camped out in London cafes these days, when I have reams of computer work or book work to get through. It’s not that I can’t work from home, it’s more that the laundry pile, cupboard of snacks and Neighbours on TV (yes, I watch Neighbours and yes, I’m probably the only person in England who still does) tend to somewhat detract from the task at hand.

With that in mind, I have a newfound appreciation for airy open lounges with ample seating, welcoming vibes and a rush-free, fuss-free ambience.  Throw in the coffee and cookies on tap and the grand pianist providing the soundtrack and it became clear to see why so many business folk and freelancers contentedly tapped away on their Excel spreadsheets in the confines of this hotel reception come lobby lounge.

I cant say I’ve done an in depth study on the topic but at a guess, I’d say there are probably more photographs of yours truly in this post per word count than there have been in any other. Why? A sudden newfound adoration of my own mug or a belief that this is the way forward on social media? Naaah, try again. That’s not really my jam but the reality is, having the opportunity to stand on your own balcony in a destination as crowded and busy as Manhattan was quite the luxury, let alone during a February New York winter (usually a frostbite inducing affair but to our good fortune, it was the second time we had booked a winter visit in this city and found ourselves in the throes of record-breaking warm weather.)

I usually cringe at having photos of myself splashed across my blog but whether it was the slouchy, oversized robes or the American in Paris balcony flair, it seemed even the more self-conscious among us fell victim to a bout of posing here and there. 🙂

I’m a frequent visitor to the Big Apple and whilst the city is flush with hotels of all shapes and sizes, it was hard to argue with the Park Avenue location, the dreamy balcony and the endless early evening cheese!

Disclaimer: We were guests of Hotel Giraffe but all opinions, staged balcony poses and cheese consumptions are my own.