(In case you hadn’t clocked, that chocolate lover is me).

Sniffing out the best chocolate shops in Brussels.

Many flock to Belgium to sample the Moules and Frites on offer (supposedly the best frites are located at the Place Jourdan Market – look out for the mile long queues). For me though. it was all about the chocolate. If you are a regular reader of this bog, you’ll know I’m forever losing the battle against my sweet tooth and if you died and went to chocolate heaven, Belgium is what it would look like.

But with only one night in Brussels at our disposal during the #ParkInnExpress challenge, there was no time to be wasted on uneducated guesses so we took to our guidebooks, Twitter recommendations (and a little bit of freestyling) to seize the best chocolate opportunities – choc-portunities if you will.

The overwhelming vote I came across during my research was Pierre Marcolini, a very elegant, couture and sexy chocolatier in the upmarket Sablon Square, a little pocket that is Brussels’ answer to Belgravia in London. I’ve put together a guide on some of the lovely chocolatiers we found. If you’re limited on time and love chocolate, it might serve you well to explore some of these and I’d love to hear your suggestions in case I return.

Walking in, my eyes were agog with the rainbow display of perfectly uniform macarons, inviting chocolates and desserts – shame I was too full to eat much (yes occasionally, even my tummy gets full though I did sneak in a speculoos-flavoured macaron). When in Belgium…

It was here where I grabbed a couple of take home treats including the “tablets” for which they are famed. I chose a milk chocolate with almond nougatine flavour as well as a small mixed box including fruity and nutty praline chocolates. Prices are on the steep side here but his reputation precedes him and what I hadn’t realised was that for those of us living in London, the temptation need not end, as the Marcolini treats are also stocked at the Selfridges food hall!

They say that it was Wittamer who trained Marcolini and that this little boutique is where some of the Belgian royals choose to shop so unsurprisingly, this too is on the Sablon Square. Keep your eyes peeled for the pretty-in-pink canopies. The cakes at the counter looked creamy and rich but at 7 Euros for an eat-in hot chocolate and having already splurged at Marcolini, I decided to leave this one for the royals. Had there been a day 3 on the agenda though, you’d have spotted me taking my seat!

Around the corner from Sablon Square, you’ll find the stylish and friendly Laurent Gerbaud cafe, who seem to specialise in using fruits and nuts in his creations. I spotted pistachio, cashew and almonds lurking around to name but a few as well as chocolate-covered fruit, including apricot, plums and pears. 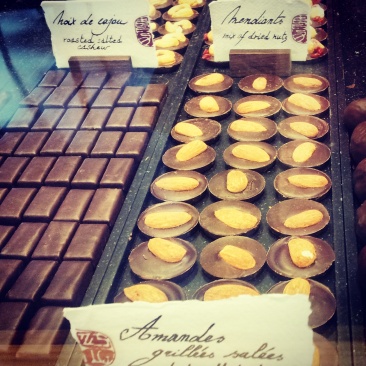 Their hot chocolate was like a molten lava of temptation, served with a little chocolate of your choice. Just as we were leaving, a large group of tourists arrived, as part of what appeared to be a chocolate tasting tour – definitely one for the itinerary next time!

I loved the decor of this rustic, wooden-looking chocolatier with bohemian, messy and fabulous slabs of colour and flavour sitting at the counters and an enormous choice of palm oil free chocolate spreads, including the chocolate, olive oil and hazelnut one I cheekily brought home. 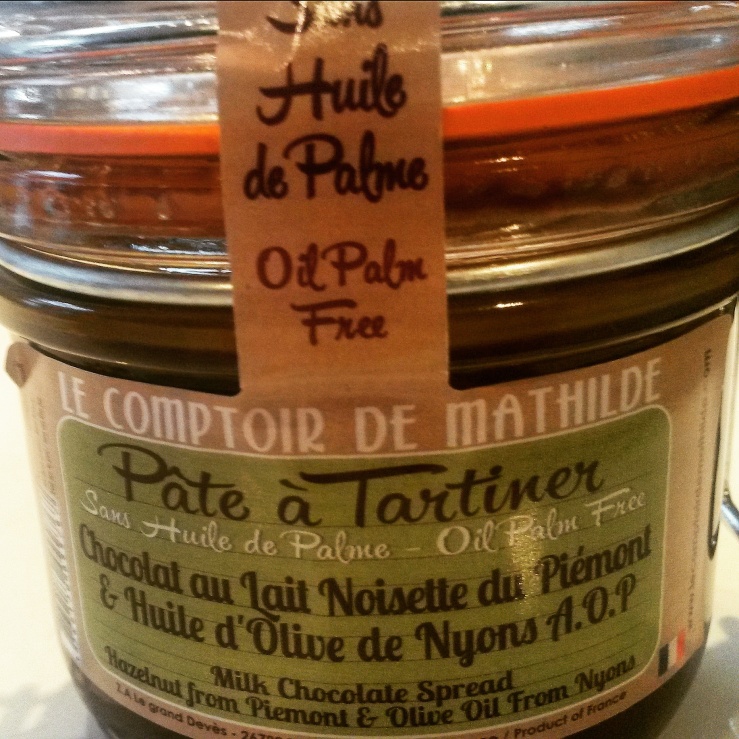 But what really drew us to this gem previously unknown to us, were the neatly aligned slabs of different chocolates, firmly attached to a wooden spoon, just waiting to be dunked in a cup of hot frothy milk for an instant and unique hot chocolate. Me, I love aromatic spices so chose the chocolate and cinnamon, which warmed me to my very core, whilst the evening windchill numbed my fingertips. 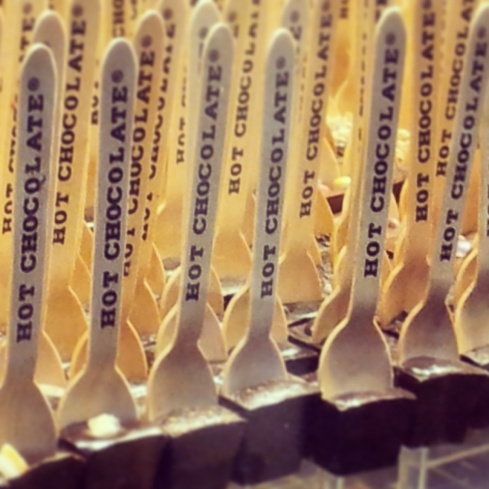 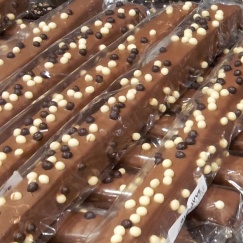 Obviously this list is not exhaustive and I have no doubt that with longer there (and a flatter tummy!), I would have sampled a few more but these were my highlights.

What are your chocolate recommendations from around the world?

39 thoughts on “A Chocolate Lover’s Guide to Brussels”