It is frequently claimed that to get the most out of your travels, you need to research and plan well in advance. Mostly, the people who make such proclamations are the serial spreadsheet sorts, who fail to see any thrill in putting together itineraries at zero hours notice, who prefer concrete plans over impulsive gambles and who must, no doubt, be secretly judging my style of travel planning. 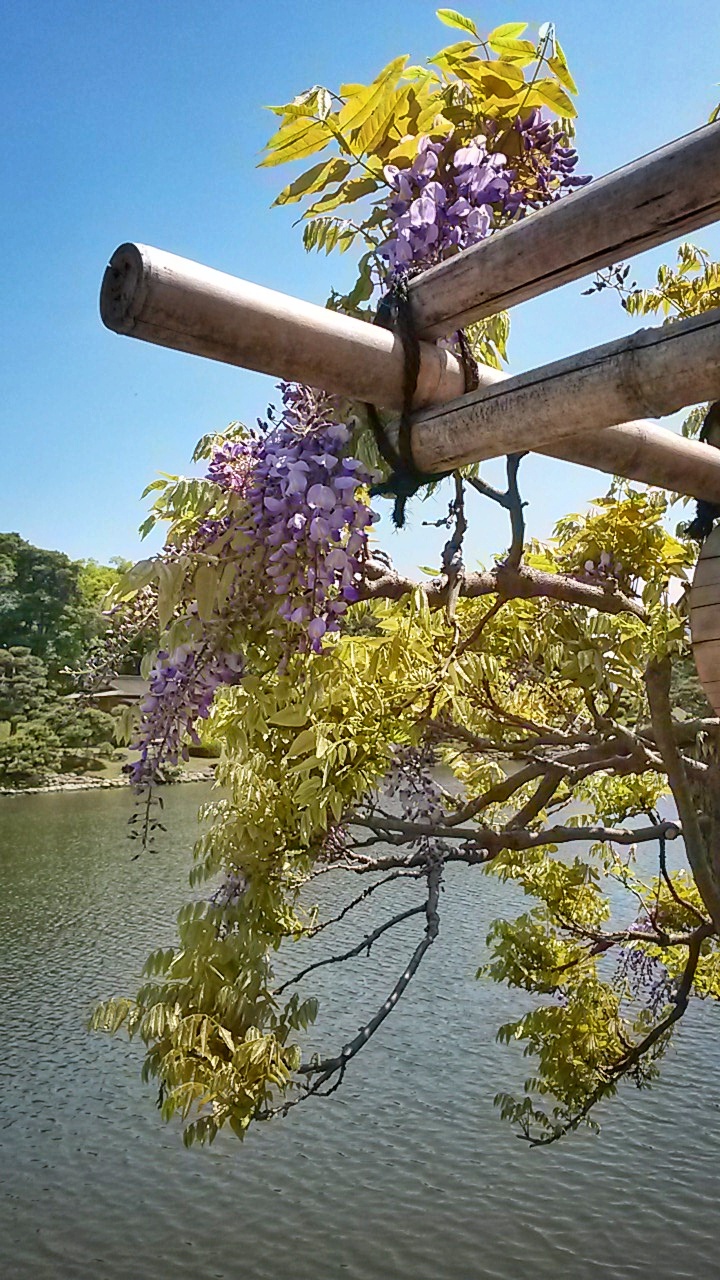 In my own book of travel tales, however, some of the most memorable and inspiring experiences from around the world were born from those very gambles – the surprise finds that I never studied, never considered and sometimes, had never even heard of. Piran in Slovenia was one example and the Perito Moreno Glacier in Argentina was another; the third and most recent surprise was the discovery of the cherry blossom season in Japan, one of the most delightful and unanticipated treasures I have unearthed to date. 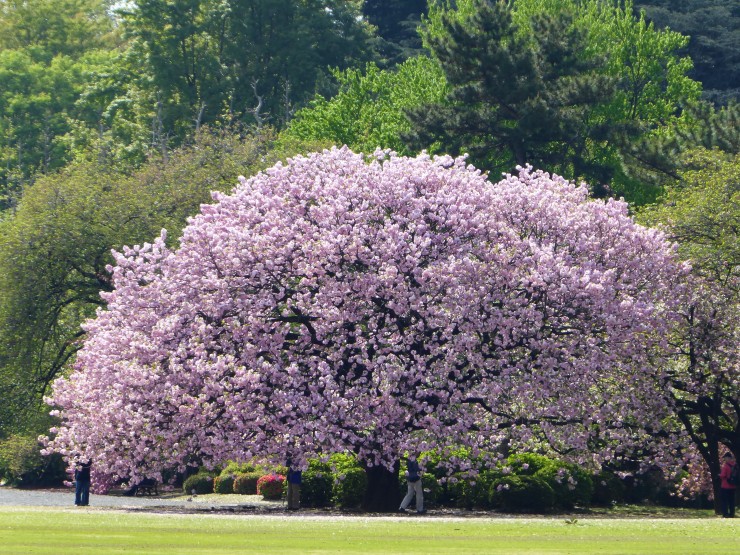 When we booked our Japanese adventure at only six weeks notice, we genuinely had no idea that our dates would fall within cherry blossom season, albeit the end of it. As someone who isn’t green-fingered at all and definitely doesn’t know their hydrangea from their chrysanthemum, this was nothing short of a coincidence. 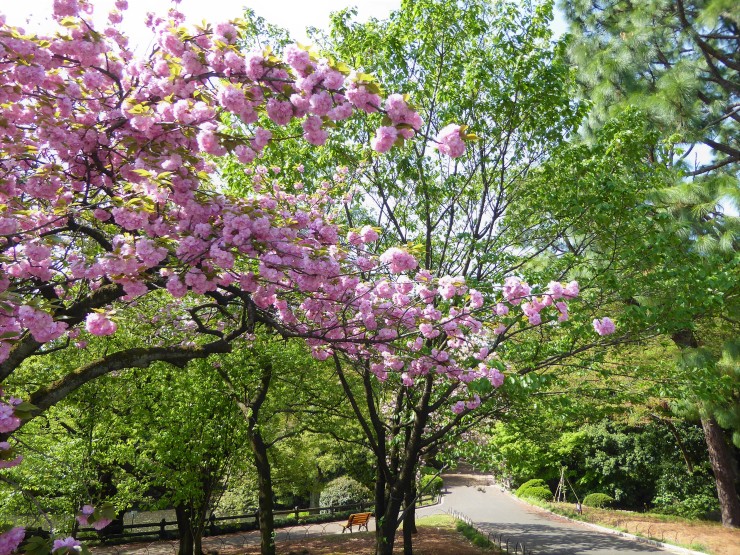 Never could I have predicted that our last-minute adventure would bestow upon us one of nature’s most inspiring marvels. 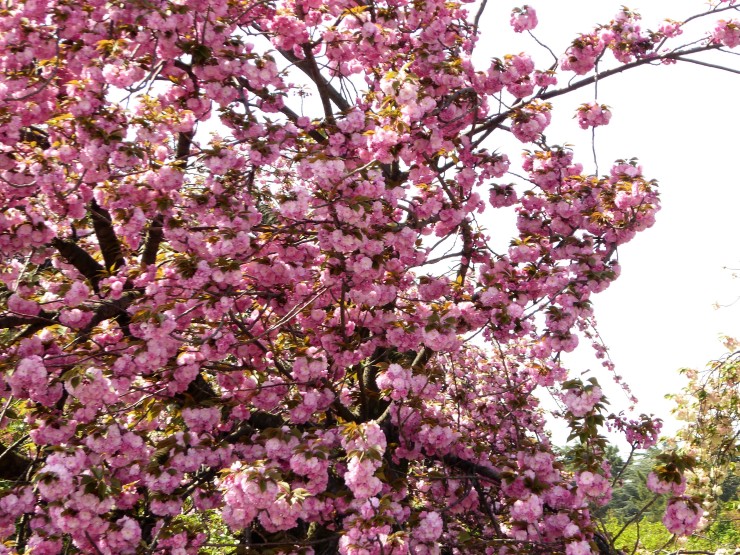 Since we were arriving right at the end of the brutally narrow time window, we decided not to get our hopes up – at best, seeing any blossoms would be a bonus. But when we read about a cherry blossom tour in Tokyo, which was drawing to a close just one day after our arrival AND which happened to have its pick up point at the very hotel we were staying at, well it seemed that the universe really wanted to ensure we saw these cherry blossoms, also known as Sakura. 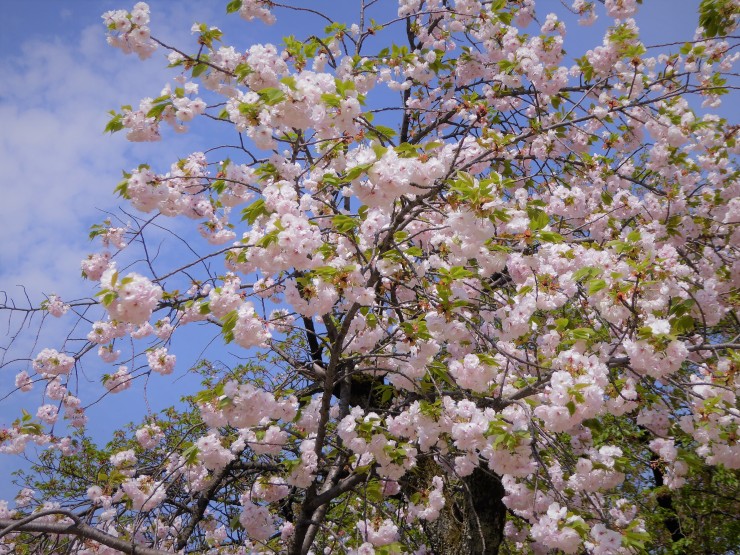 Ordinarily, we prefer discovering parks and gardens at our own pace rather than on organised tours but since it was a race against time and this would be our first full day in a country where we couldn’t speak the language, we decided a tour was the best way to ensure more time was spent looking at flowers than maps! 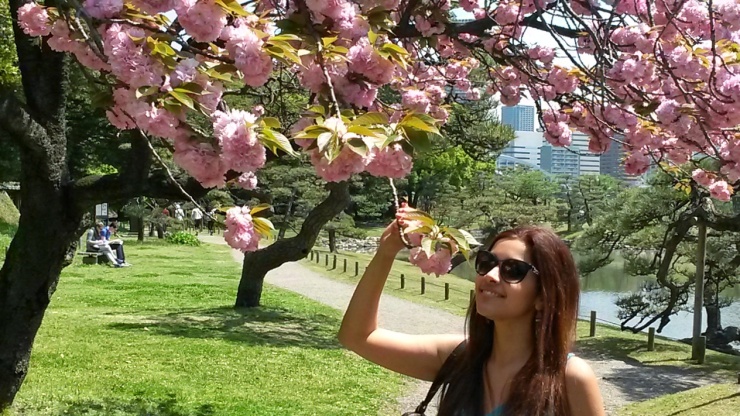 What we hadn’t foreseen was that we would end up arriving in the centre of Tokyo at 7.15am after a night on the airport floor, giving us only half an hour to turn things around before we had to meet our guide in the lobby; to say we were exhausted would be putting it mildly. Still, the promise of silken petals kept our eyes stretched open as we made our way around some of Tokyo’s best blossom viewing spots. 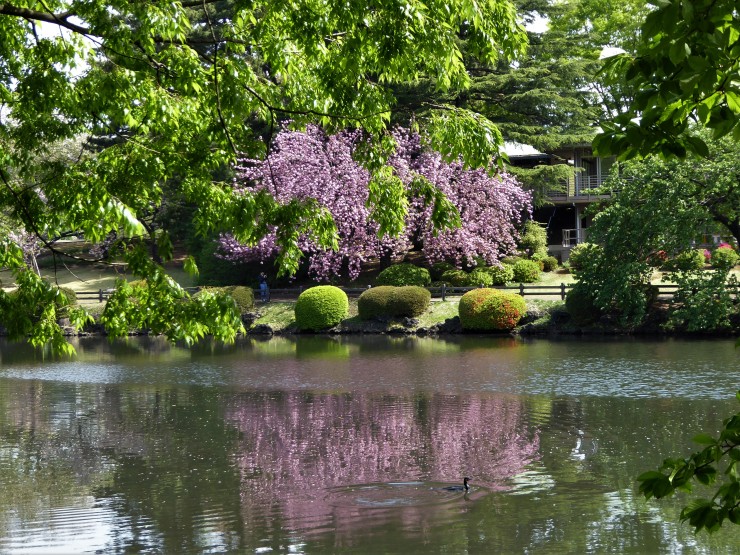 My cherry blossom education kicked off early on in the day, when I learned that the term “cherry blossom” is often used to encompass a range of different blossoms, corresponding to the many varieties of cherry tree found in Japan. Among the commonest types and the ones most prolific during official cherry blossom season are the Somei Yoshino (which usually have around 5 petals). 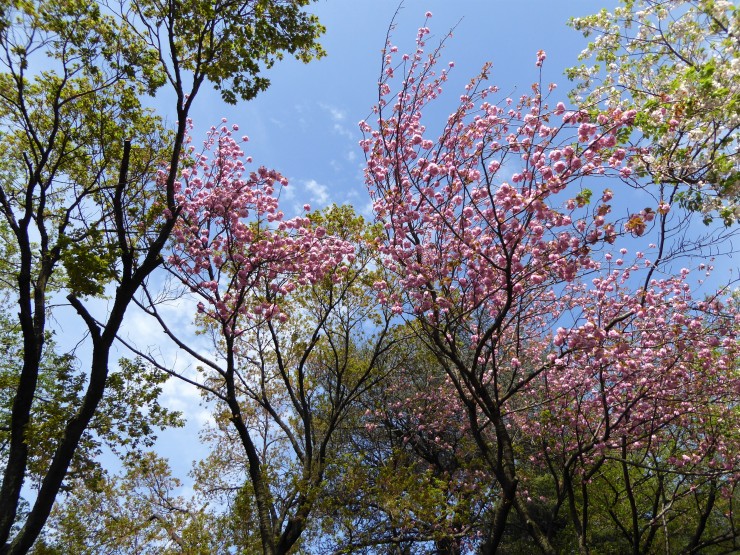 Many of these had fallen by the time we arrived in mid-late April but we, instead, caught the fuller-bodied Yaezakura – the late bloomers (a term that made me giggle as it conjures up connotations of a 15-year-old boy desperately staring into to mirror seeking out any fragment of a facial hair!)

Honestly, if I hadn’t been specifically told about the contrasting qualities of the blossoms, I would never have deciphered these distinctions. In my simplistic eyes, regardless of their names or botanical properties, they were all equally mesmerising, swaying with grace and poise in the benign April breeze.

The Showa Kinen Park was the first sight we explored after arriving in Japan. Within seconds of strolling into the park, we caught our first glimpse of the plump, blushing blossoms. They cast their spell on us, as they have done with millions before us and our jet-lagged slumber soon became a hazy memory, our eyes fixated on the floral clusters ahead, our hearts singing from the Hanami hymn sheet. 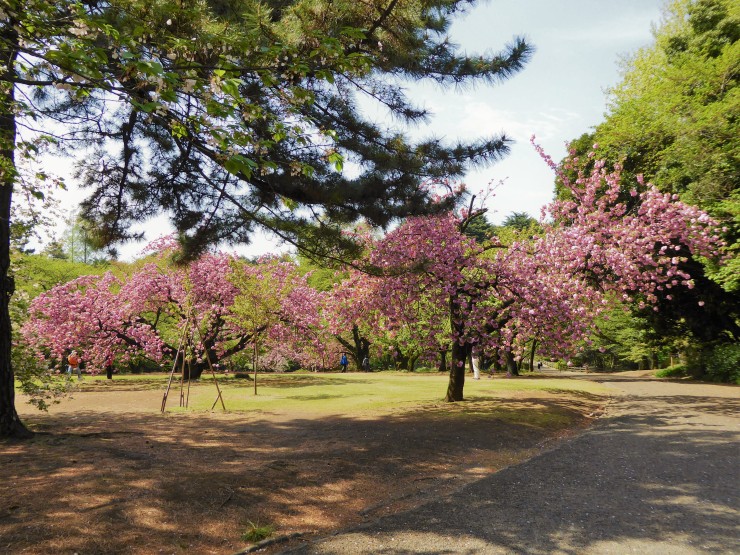 The literal definition of Hanami is “flower viewing” but the term is frequently used to describe the celebration and pleasure that comes from intensely gazing at the cherry blossoms in full bloom. Families gather on picnic blankets for Hanami parties and couples giggle covertly under canopies of sweeping pink blossoms. I honestly cannot think of a more idyllic way to spend an afternoon with someone you love than a spring-time picnic under the cherry blossom trees of Japan. Sound like a fairy-tale? Felt like one too. 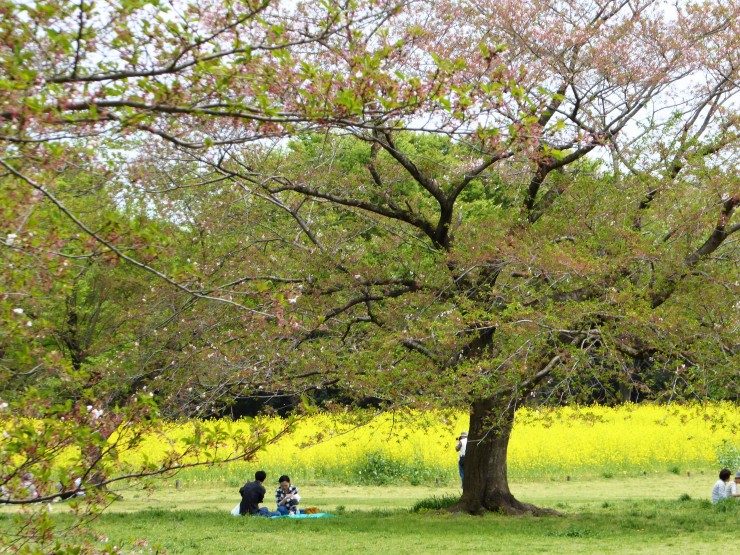 Back in England, we had barely expected to reach Japan in time for the cherry blossoms let alone to add any other blooms to our viewing portfolio but it seemed that the Japanese countryside had opened up the floodgates. Showa Kinen Park welcomed us to Japan with mosaics of vibrant tulips and golden rapeseed blossoms, adding to its artist’s palette of hues. 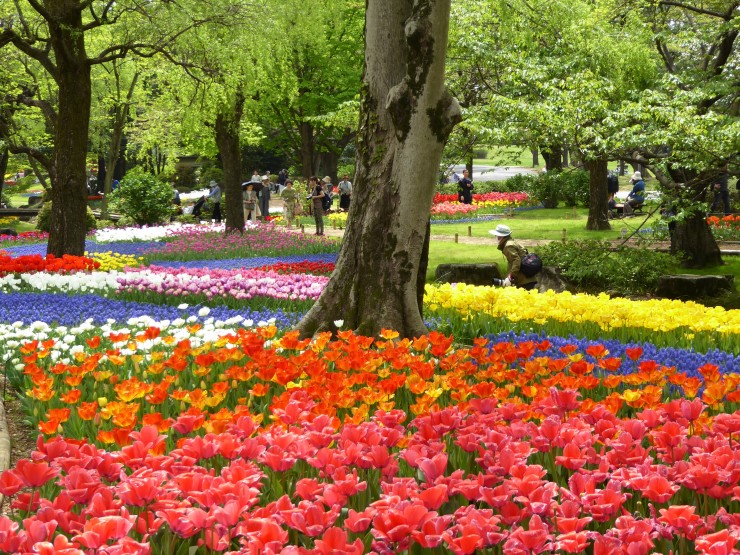 The locals welcome visitors around the world to admire and partake in this enchanting perennial custom – you don’t have to be Japanese to participate in Hanami. 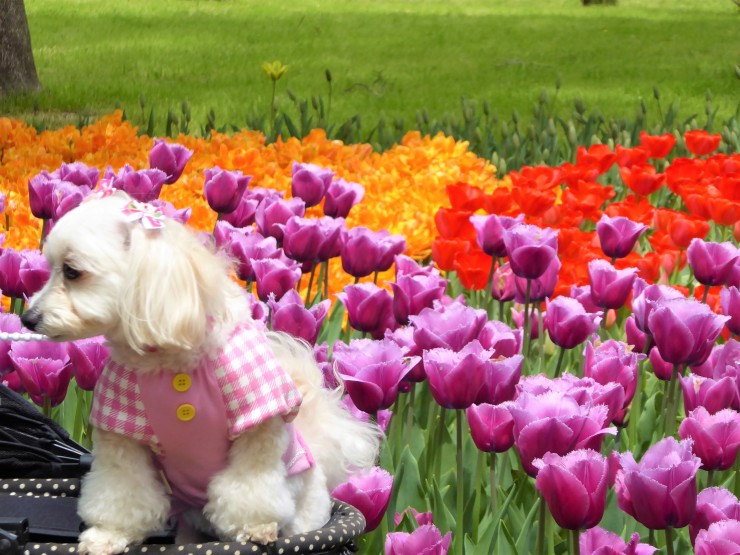 I think we can all agree that this pooch was dressed quite the part for a day of cherry blossom viewing with an ensemble that complemented the environment better than anything I could have thrown together. 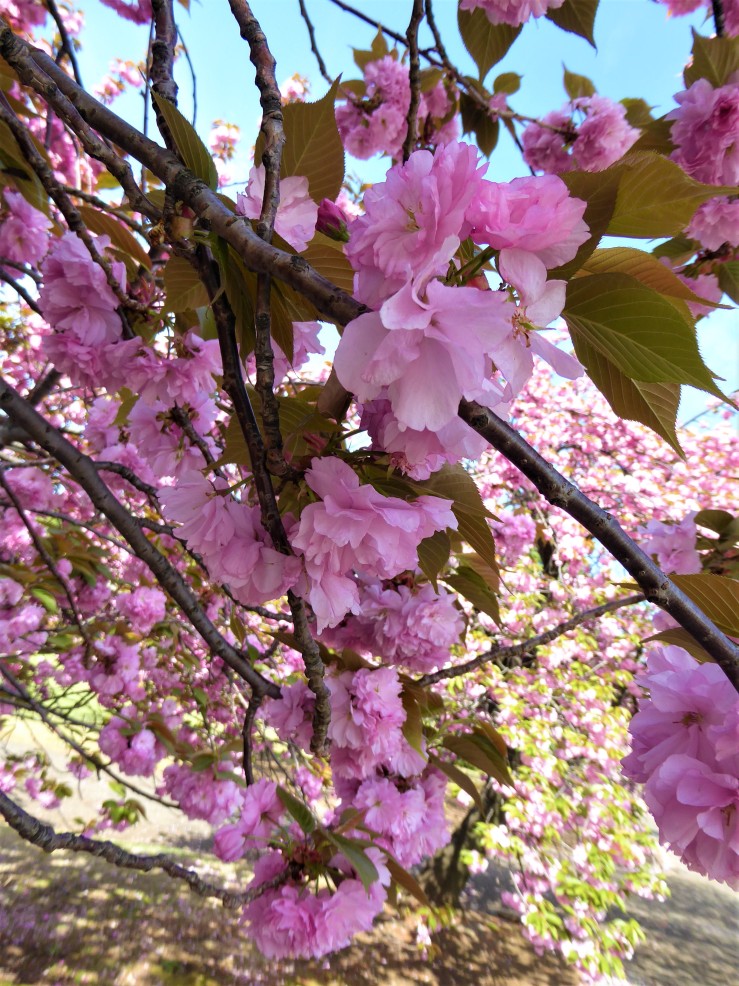 Pumpkin and I are currently in talks about having our garden re-designed (I italicise *talks* since our house-related conversations rarely amount to anything (because all either of us really want to be doing outside of work is travelling) but on the offchance we follow through with this garden plan, I am currently pitching my idea of a Japanese-themed space. 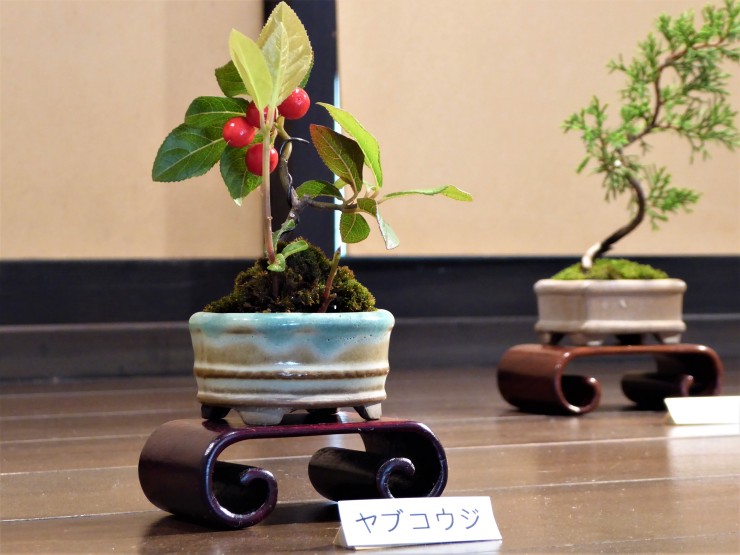 My suggestion of including a series of adorable little bonsai trees is being met with mixed feelings but after seeing these miniature, dolls-house sized ones at Showa Kinen, can you blame me for trying?!

Any fears of peaking early on this tour were soon allayed upon reaching Shinjuku Gyoen, one of the most popular parks in Tokyo for Sakura viewing. Here, just metres from one of the most built up parts of the city, the cherry blossoms refused to hold back with rows of trees boasting the best of their blossoms. 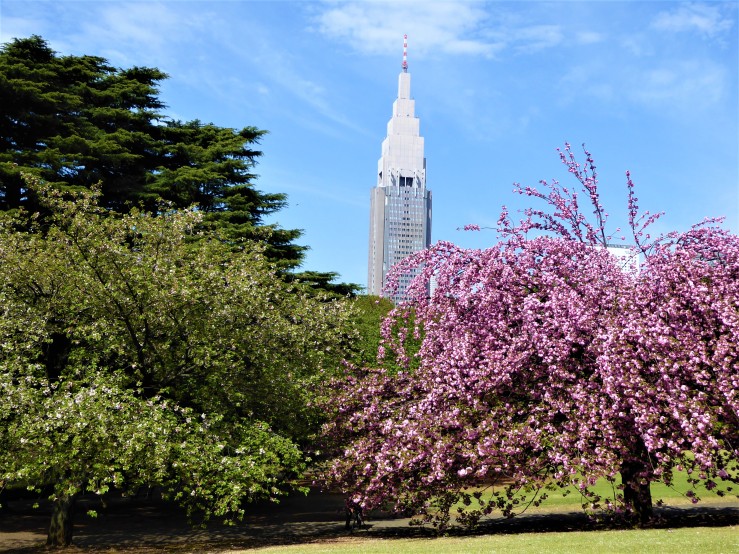 As for the ones that had given up already, they had their own act of magic lined up, conceiving carpets of unctuous petals on the pavements beneath. One perk of travelling towards the end of the official cherry blossom season is that the walkways and gardens absorb the delicate floating residue of fallen blossoms which makes for a beautiful canvas to be exploring on foot.

The other perk, of course, is that the cherry blossom viewing spots are far less crowded than you might expect for that time of year since the most ardent Sakura worshippers arrive earlier for full bloom. 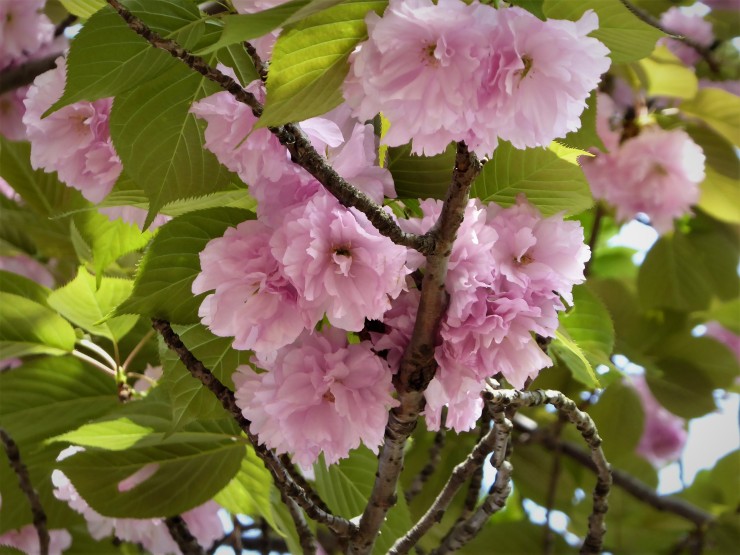 Frequently cited as one of the best parks in the city for seeing the cherry blossoms, Shinjuku Gyoen is one of the absolute must-see spots if you are heading to Japan in the March/April  time of year. And just like Showa Kinen Park did with its tulips, this park also diversified beyond the powder pastel tones of the cherry blossoms, throwing us off guard with its bulbous fuschia offerings. 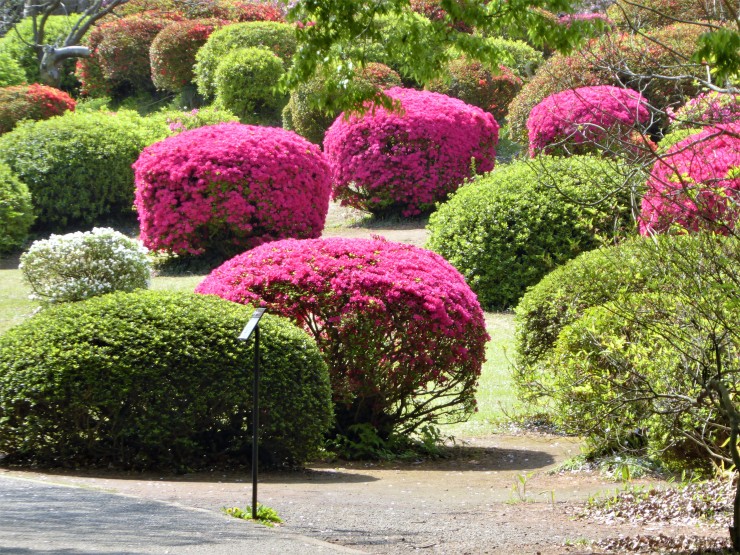 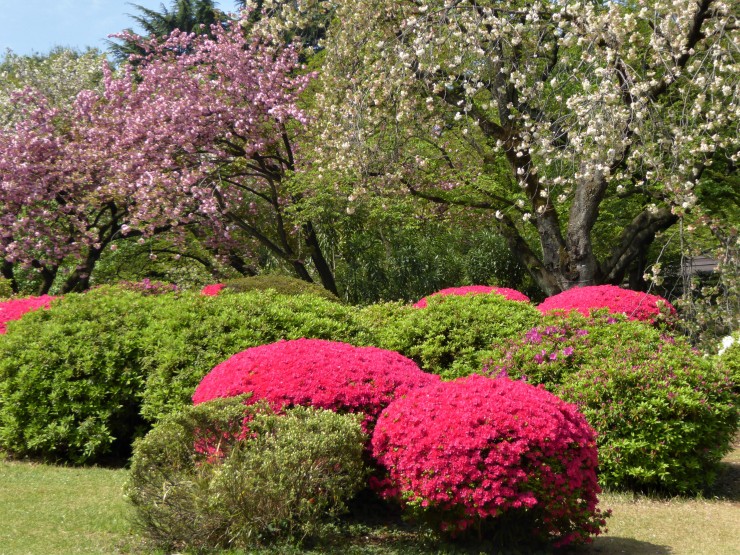 If you’ve been reading any of my recent Japan posts, you may recall that one of my weirdest “only in Japan” moments was queuing for a sushi breakfast feast at 8am. I had no regrets but as someone who usually eats a banana for breakfast, this unfamiliar early morning fill necessitated a stroll and off we headed in the direction of Hamarikyu Gradens. (one we found independently rather than the cherry blossom tour.) 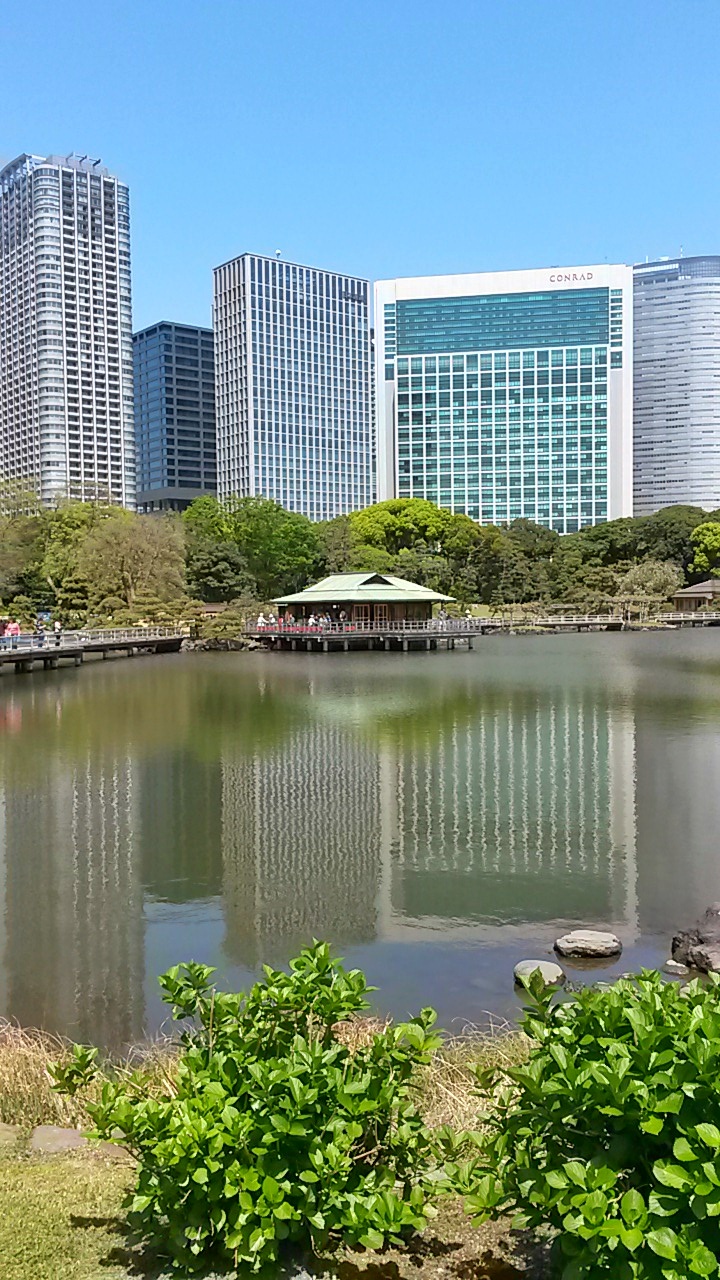 Whilst we were fortunate to have seen blossoms in every park we visited, I loved how each park had its own characteristic style. 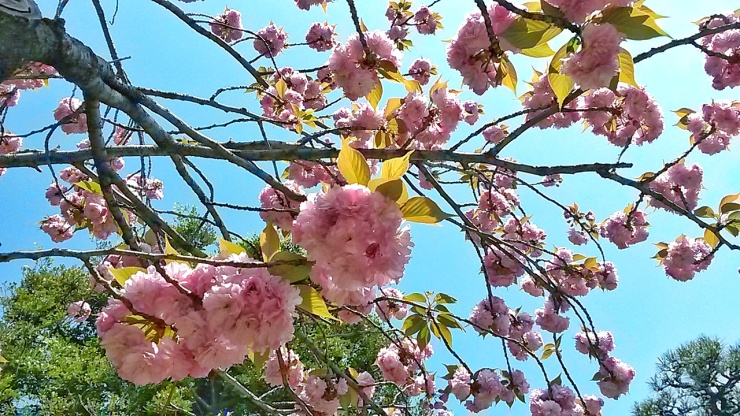 Hamarikyu, in particular, was a paradoxical fusion of movie-esque footbridges, pockets of clear water and tranquil manicured gardens against a backdrop of towering skyscrapers. 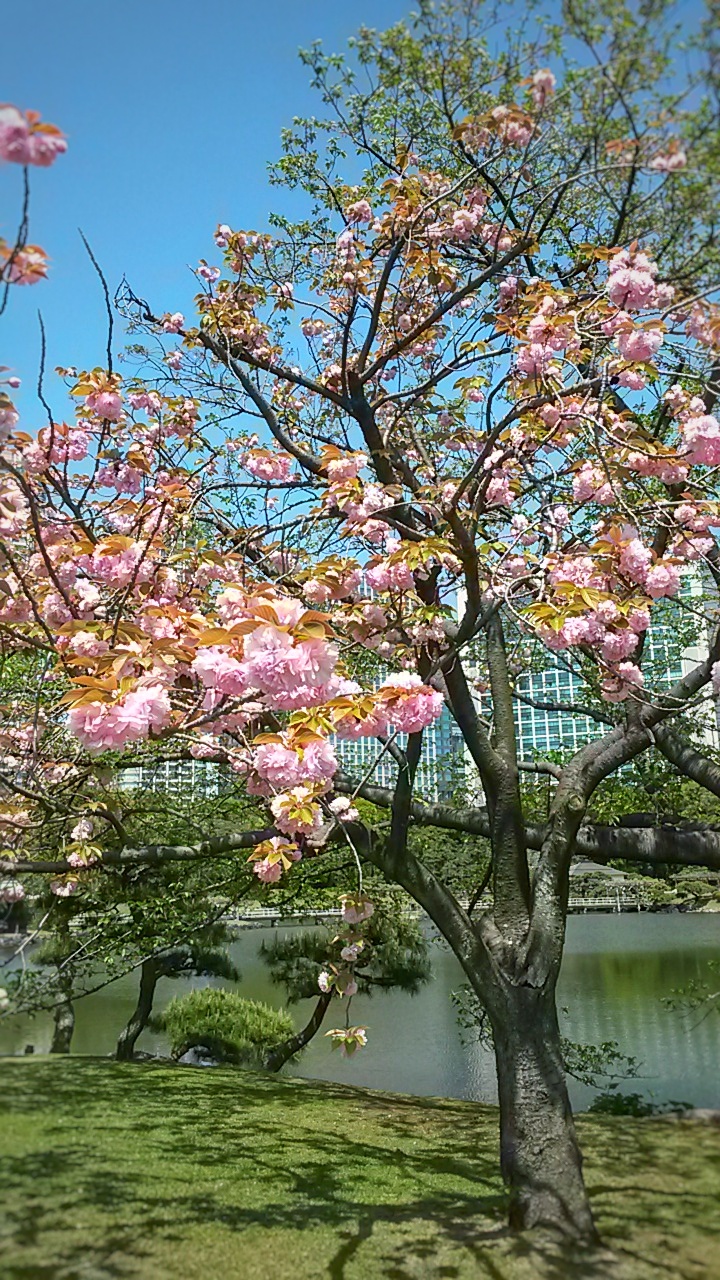 As midday approached and the fierce sunshine illuminated the fluffy petals further, we sought shelter beneath a lattice of wooden logs and I realised that the Hamarikyu Gardens condensed so much of what I love about Tokyo into just one snapshot – the old blending with the new, the natural meshing with the man-made, the serene quiet negating the corporate hubbub. 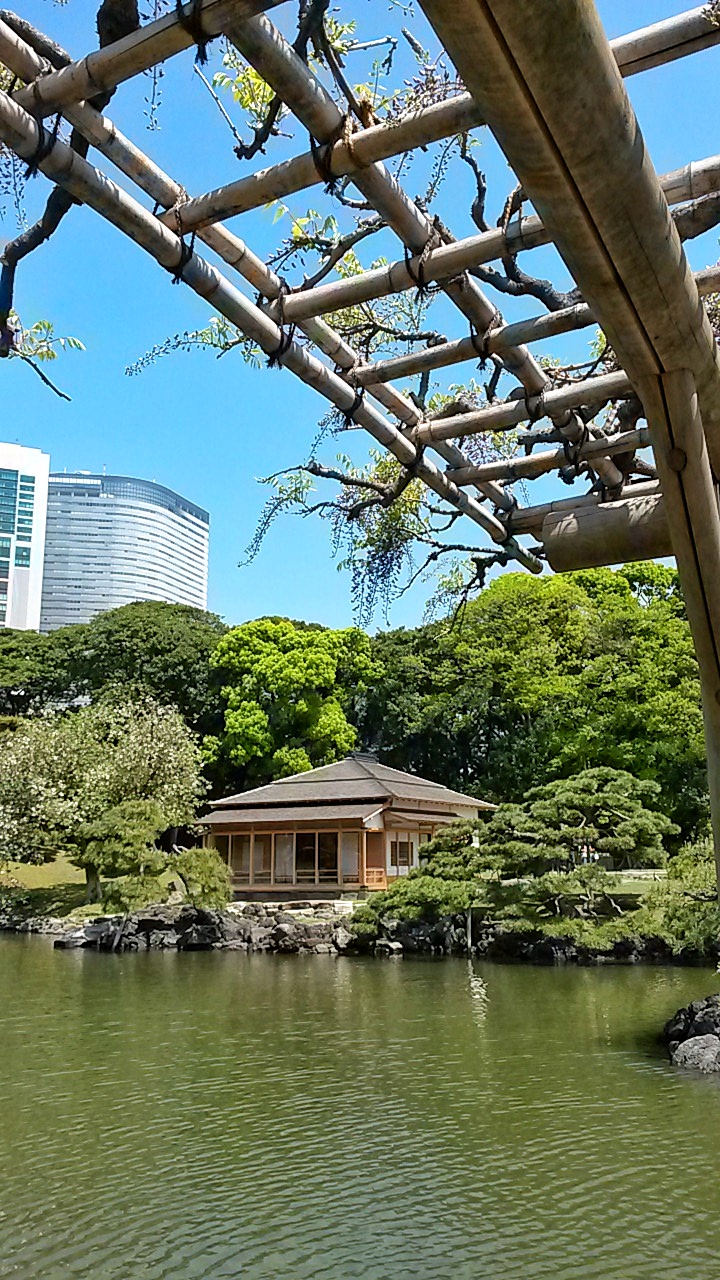 As cheesy as it sounds, it was a sincerely uplifting and inspiring feeling seeing the cherry blossoms dance in the sky above us, reminding me how engaging and wondrous the changing seasons can be. 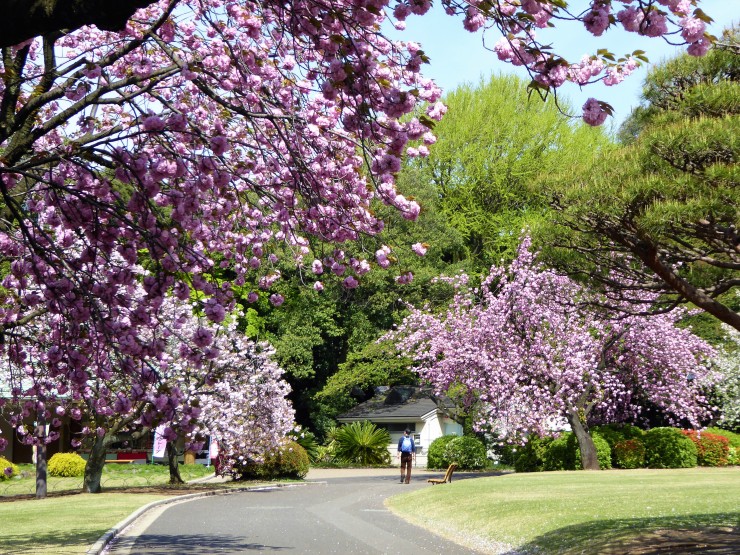 What has been your most unexpected inspiring find on your travels?

51 thoughts on “A Cherry Blossom Tour in Tokyo”