It’s fairly obvious from my blog title that I do all my exploring in the days and weeks afforded by my annual leave, meaning that my trips are rarely longer than a fortnight and often shorter. Whilst this isn’t how everyone would choose to travel, it’s a rhythm that works for me but it does mean I need to use my time wisely if I’m headed somewhere with  lot to see and do. 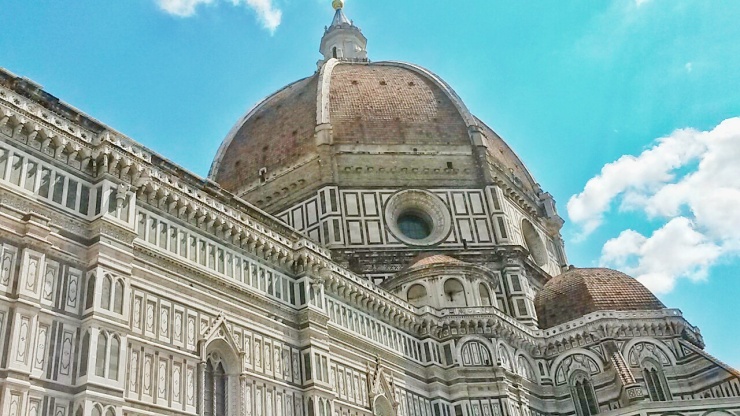 Seeing David and the Duomo, Florence

Florence is the perfect example. I made my second visit there recently for just a two night break after visiting Cinque Terre and as Pumpkin had never been, he assumed I would be the perfect guide. The problem was this: having previously wandered around the galleries and monuments in Florence with only a few fleeting glances thrown at my guide book,  I could remember very little of the history. And this was exactly where the Walks of Italy David and the Duomo Florence city tour came in. 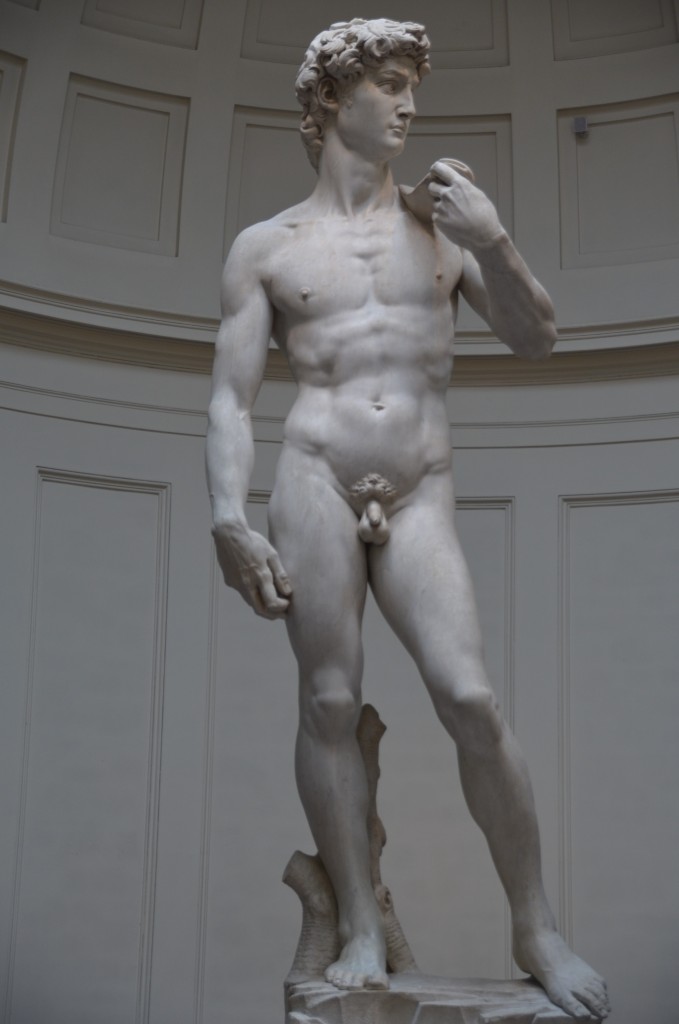 As one of Italy’s most  important sculptures, David is thought worldwide to be not only a masterpiece of art but also a symbol of the perfection of human form. It is unsurprising, therefore, that Michelangelo’s David was the first stop of the day and all of us in the Walks of Italy crew rather smugly jumped ahead of the crowds trailing the streets leading up to the Academia Gallery. When you see the queues, you’ll understand why it’s worth taking the tour for this perk alone, particularly when the weather was manifesting some serious adolescent mood swings, fluctuating between scorching and soaking (you might be able to tell from the skies in the photos!) 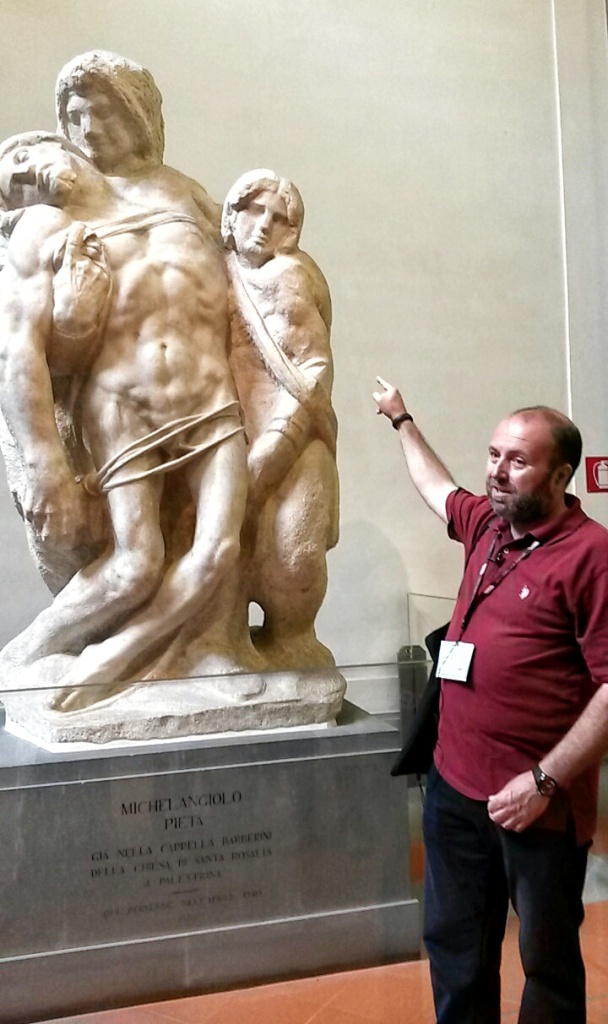 Whilst most visitors entering marched straight towards the towering Carrara marbled, defined torso of David, Bernardo (our Walks of Italy guide) set the scene by making sure we also learned a bit about the other beautiful statues in the same gallery. 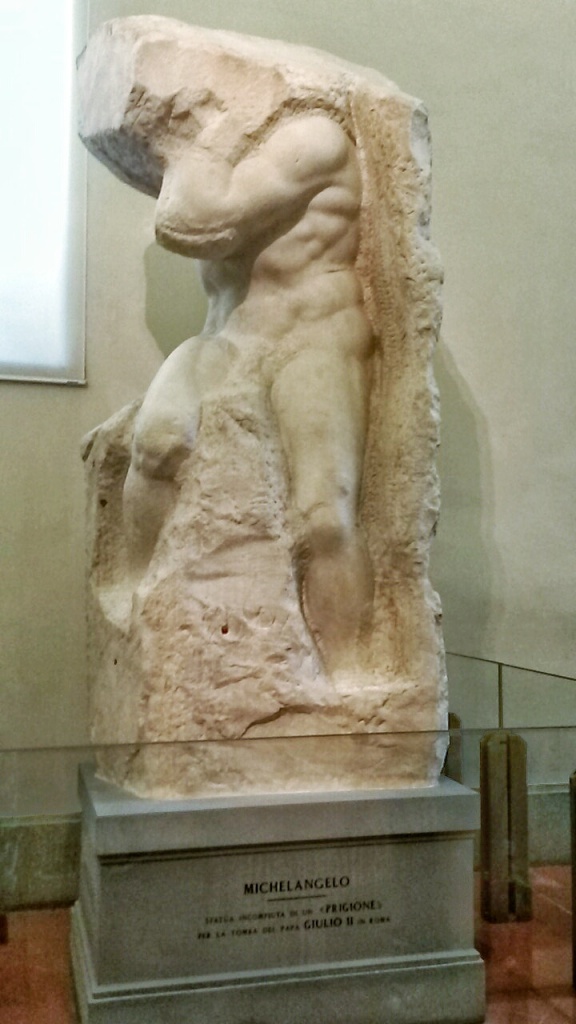 He also enlightened us on just how many artistic masterminds have blossomed from the Academia, which impressively sells nearly ten times as many tickets annually as there are residents in Florence (!) and is still one of the most prestigious fine arts institutions in the world with just a small handful of places offered to only the most talented, budding arts students. As renowned as David is, you must not visit Academia without understanding its prestige as an establishment in its own right.

I was already rather in awe of the talent of Michelangelo before we even hovered in the vicinity of this solid sculpture. 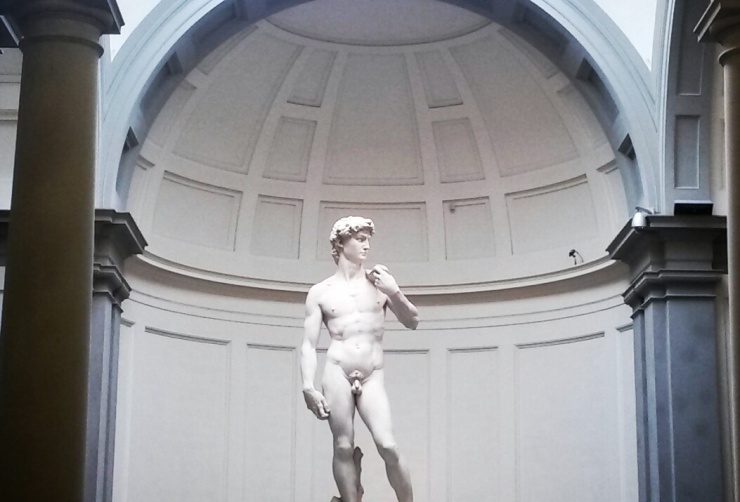 Supposedly, when he was given this imperfect block of marble to work with, several fellow sculptors had already declined this project, deeming it too challenging. You can perhaps get a feel for how we spent more than half an hour hearing all about David with Bernardo drawing our attention to so many details that I hadn’t even noticed during my first visit, such as the crack on his left hand caused by the act of vandalism that occurred at the hands of a visitor in the early 90s. 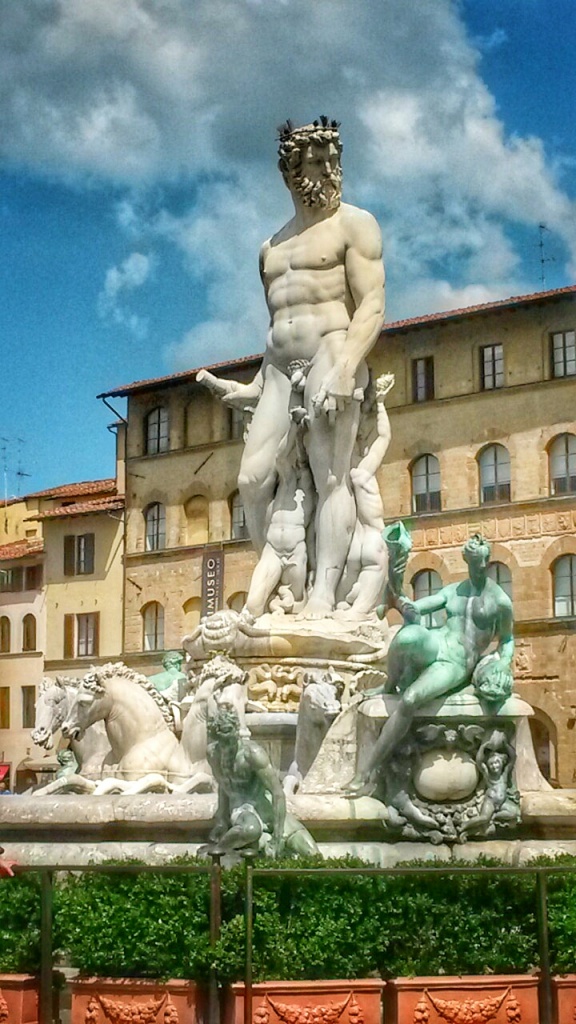 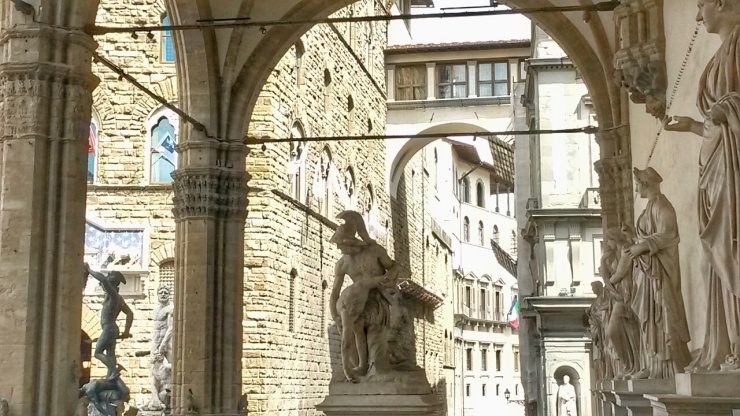 Our sculpture fix was not about to end at the Academia either with a visit to the Piazza dellla Signoria, a square that has developed a reputation as one of the finest (and one of the only) outdoor, free art galleries anywhere in the world. You may spot a familiar face there…

And some new ones as well… 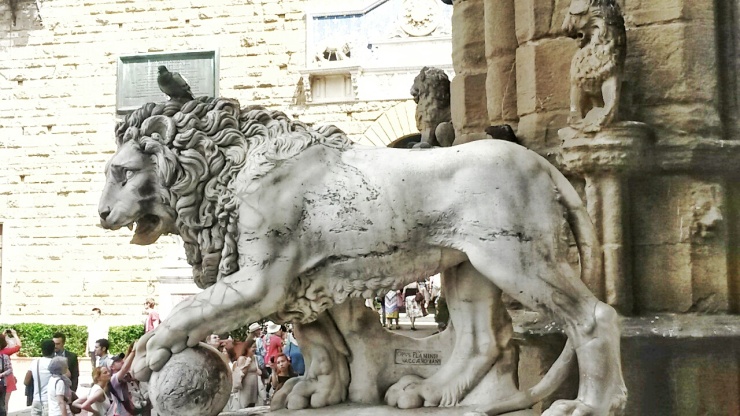 I vividly recall photographing this square during my first visit here, having no idea that only three of the sculptures here are copies whilst the rest are original masterpieces. 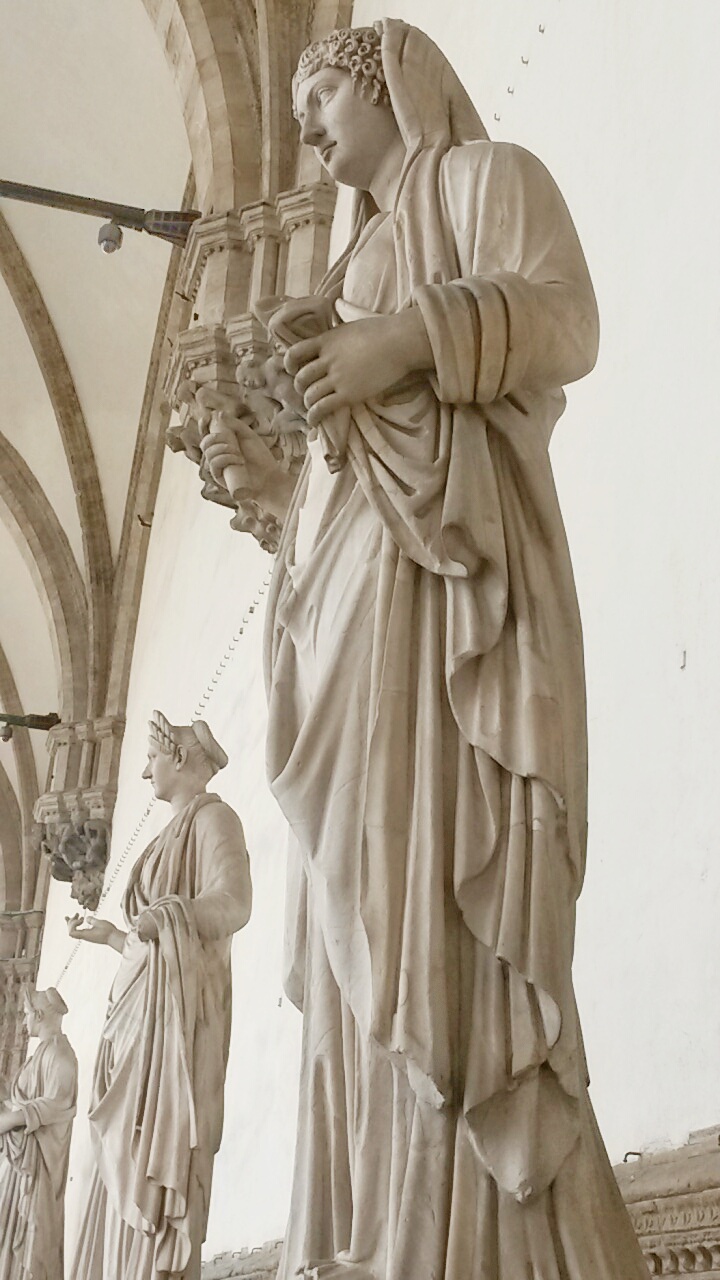 Bernardo’s humourous, story-telling approach left us all completely engaged and when he asked for a volunteer guinea pig to demonstrate a point he was making about the statues, I tried to drop Pumpkin in it by pointing in his direction… Unfortunately, my pointy finger got mistaken for a raised hand and the next thing I knew, I was a wannabe statue preparing to get into combat. A fun photograph but perhaps not one to make the shortlist for my next Gravatar pic! 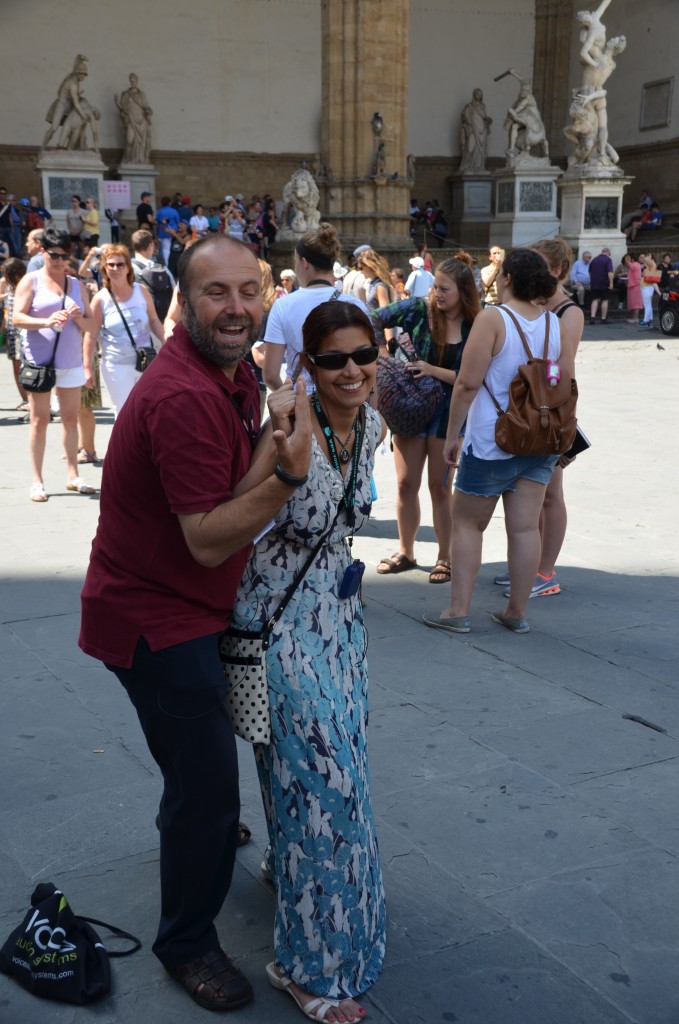 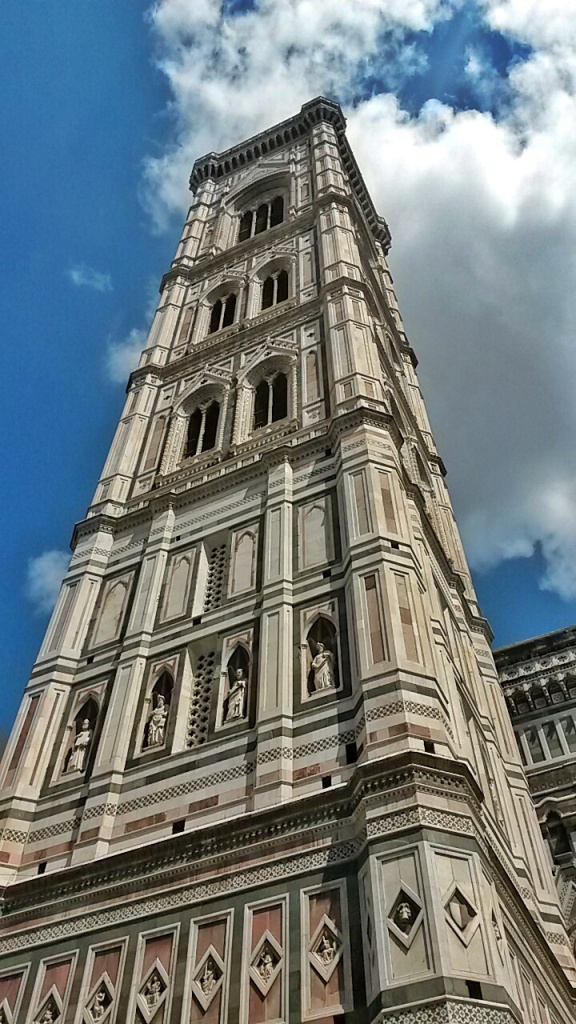 I think it was the eye-catching beauty of the Gothic and Renaissance architecture of Florence’s most famous landmark that first made me fall in love with this culture-laden city.

The detail on the marble of the Duomo is such that every time you stare at it, you notice something new, another sculpture, another carving that you had missed before. 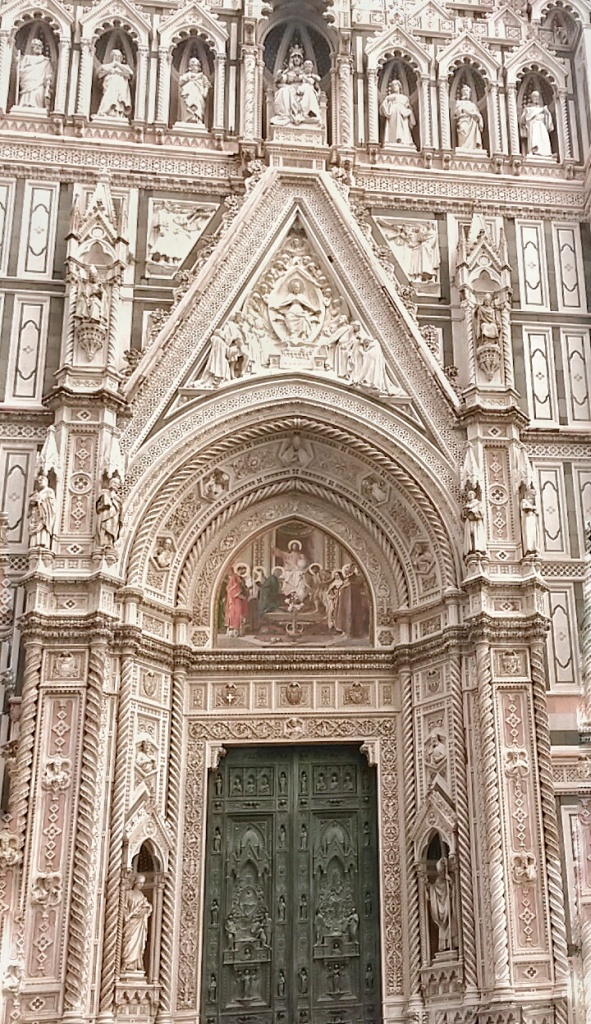 Unlike many other similar monuments of its time, the pastel green and pink shades found throughout the building add to its mellow charm even more. 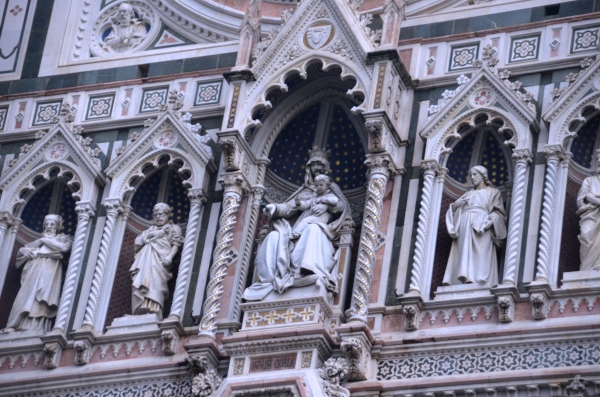 The tourist crowds around the Duomo seem more concentrated than anywhere else in the city and if you are travelling with children for example, this is not the place to let go of their hand! 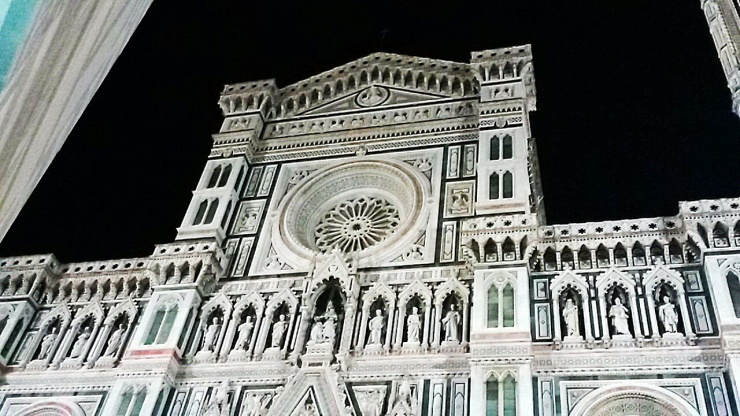 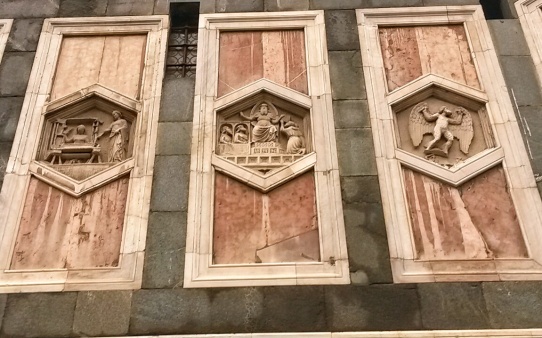 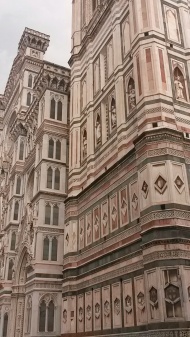 Before I came on the tour, I was rather perplexed as to how on earth they were going to have a guide speaking to us all when there were litters of groups swarming all over the place. And the simple answer is – technology! Walks of Italy bypass this problem by providing each of us with an individual headset with volume control to listen to our guide as we go along. This means that for trigger-happy bloggers (guilty as charged), I can take photographs to my heart’s content without missing out on any commentary. 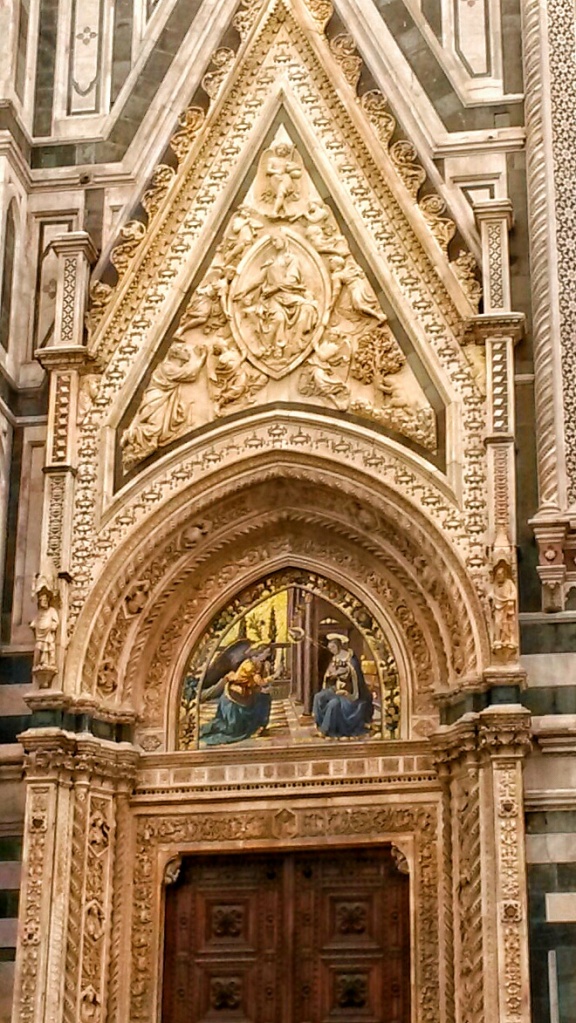 After a browse around the outside of the Duomo, we entered to hear more but please take note of the dress code before you go. Women need to have shoulders covered at all times inside the cathedral and you will not be permitted inside without it. 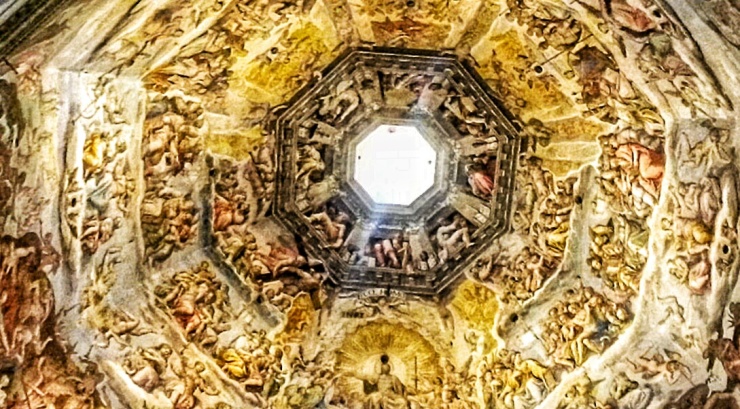 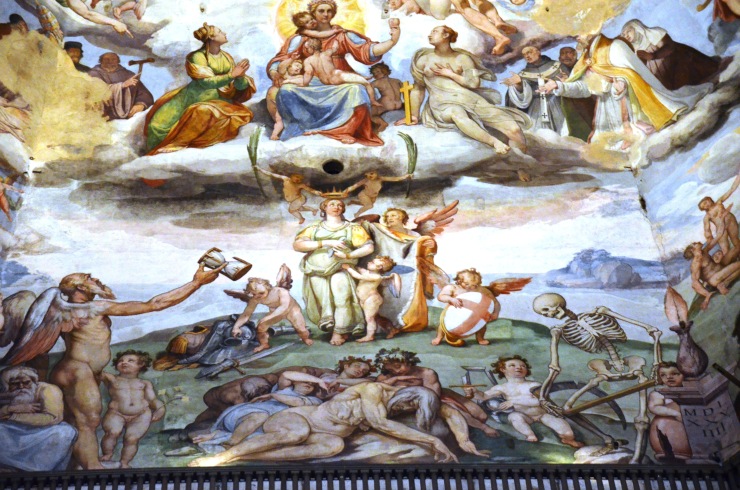 At first glance, the interior does not possess the same “Wow” factor as seen on the unparalleled exterior but you will soon be impressed once you tilt your head up towards the ornate frescoes, the magnitude of which is almost impossible to fully perceive from this angle. Make sure you pause at the large clock inside, which is one of the oldest functioning mechanical clocks in the world. 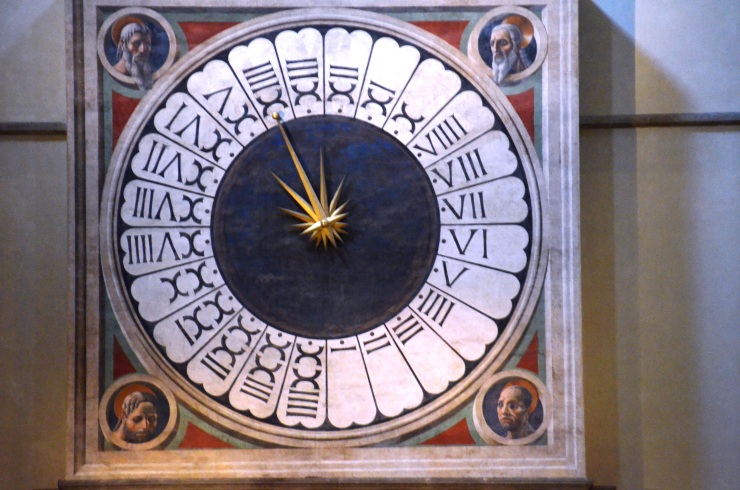 Although  it is not part of the tour, visitors can also brave the steep climb to either the top of the Dome or the bell tower for great views across Florence. I did this back in 2009 so decided to be lazy this time but a little warning not to do the climb if you feel in any way claustrophobic in confined spaces, as the staircases are incredibly narrow.

Our tour ended at the Ponte Vecchio, Florence’s famous bridge with an abundance of goldsmiths along its course. Our guide willingly hung around at the end of the tour until we had all, in turn, exhausted his recommendations for best pasta in Florence, best gelato and suggestions for other attractions to see in the city before we rewarded our morning of walking with a well-earned lunch.

Have you visited Florence before? What did you think of the city?

Disclaimer: We were guests of Walks of Italy but I am opinionated little traveller (and wannabe-statue) and all views, good or bad, are entirely my own.